Two people were killed Wednesday in the eastern German city of Halle after a gunman tried to force his way into a synagogue, according to a Jewish congregation leader. Police said one person was arrested.

The attack took place on Yom Kippur, the Day of Atonement and the holiest day of the year when Jews fast for more than 24 hours.

Rita Katz, director of the U.S.-based SITE Intelligence Group, which tracks jihadist and white supremacist organizations, said on Twitter that 35 minutes of head-mounted camera footage of the shooting was posted on a video game site. Katz said the gunman says in English just before the shooting: “The root of all problems are the Jews.”

The video was similar to the livestreamed posted on Facebook by Brenton Tarrant, 28, who is accused of killing more than 50 people at a mosque in Christchurch, New Zealand in March.

Halle police said on Twitter that the assailants fled in a vehicle. They warned local residents to remain in their apartments and “stay alert.”

BREAKING: 35-mins of head-mounted camera footage of #Halle#Germany shooting was posted on video game site, showing first-person footage of his ammo and the shooting similar to that of NZ attack. Shooter says in English prior to shooting: The “root of all problems are the Jews.” pic.twitter.com/d1QZyAqBD4

A video clip broadcast by regional public broadcaster MDR and posted on Twitter shows a gunman stepping from a vehicle, firing his weapon, walking behind the car and then firing three more times.

The head of Halle’s Jewish community, Max Privorotzki, told the news magazine Der Spiegel that a camera at the entrance of the synagogue showed a person trying to break into the building.

“The assailant shot several times at the door and also threw several Molotov cocktails, firecrackers or grenades to force his way in,” he said. “But the door remained closed — God protected us. The whole thing lasted perhaps five to 10 minutes.”

Privorotzki said there were 70 or 80 people inside the synagogue when the shooting occurred.

A witness interviewed on n-tv television said he had been in a kebab shop when a man with a helmet and a military jacket threw something that looked like a grenade, which bounced off the door frame. Conrad Roessler said the man then shot into the shop at least once.

“All the customers next to me ran, of course I did too – I think there were five or six of us in there,” Roessler said. “The man behind me probably died.”

“I hid in the toilet,” he said. “The others looked for the back entrance. I didn’t know if there was one. I locked myself quietly in this toilet, and wrote to my family that I love them, and waited for something to happen.”

Police then came into the shop, he said. 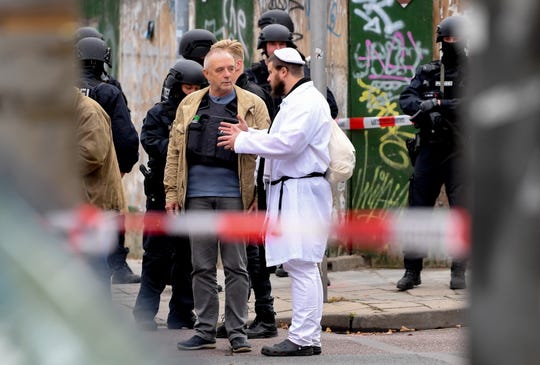 A synagogue visitor talks to police after a shooting at a synagogue in Halle, Germany, October 9, 2019. According to the police two people were killed in shootings in front of a Synagogue and a Kebab shop in the Paulus district of Halle in the East German federal state of Saxony-Anhalt. Police stated a suspect is already in arrest. Media report the mayor of Halle speaks of an amok situation. (Photo: Filip Singer, EPA-EFE)

Photos from the scene showed a body lying in the street behind a police cordon.

Chancellor Angela Merkel’s spokesman, Steffen Seibert, lamented what he called “terrible news from Halle,” but government officials said they had no information on the attack.

Halle, a city of 240,000 residents in eastern Germany, is about 80 miles southwest of Berlin. The German national railway shut down the local station following the shooting.

Statue of Liberty tour from New Jersey was 'a scam'

She married into ISIS. Is she still American?