President Trump called Iran “nothing but trouble” after saying he heard from the U.K. that tankers were seized in the Strait of Hormuz.
USA TODAY

Authorities in Gibraltar released from detention Thursday an Iranian oil supertanker impounded since last month despite a last-minute move by the United States to seize the vessel, according to the government of the British overseas territory.

Officials in Gibraltar earlier said in a statement that the U.S. Department of Justice “applied to seize the Grace 1 on a number of allegations,” but a judge in Gibraltar’s Supreme Court later ruled he had not received an “application” for the U.S. seizure.

The Justice Department has not responded to multiple requests for comment.

The U.S. move comes amid a standoff between Iran and Washington after President Donald Trump withdrew from an international nuclear accord with Tehran and reimposed sanctions. Tensions in the Persian Gulf have been on the rise since.

The tanker “Grace 1” was seized last month in a British Royal Navy operation off the coast of Gibraltar. Authorities suspected it of violating European Union sanctions on oil shipments to Syria. Its seizure has deepened tensions in the Persian Gulf, where Iran claims control of the Strait of Hormuz, a strategic waterway for oil shipments.

Gibraltar’s Chief Minister Fabian Picardo said in a statement after Thursday’s ruling that he had received “written assurances” from Iran that its tanker would not seek to travel to a destination that is subject to EU sanctions. “This assurance has the effect of ensuring that we have deprived the (President Bashar) Assad regime in Syria of more than one hundred and forty million dollars of valuable crude oil,” he said.

The “Grace 1” was carrying 2.1 million barrels of Iranian crude oil.

Following Iran’s shootdown of an American drone, tensions are high. But this is nothing new for the U.S. and Iran. We have the FAQs.
Just the FAQs, USA TODAY

There was no reaction from Iran, but the attempted U.S. intervention may further aggravate tensions in the Persian Gulf. After Gibraltar’s detention of “Grace 1,” Iran seized the British-flagged oil tanker “Stena Impero” as it passed through the Strait of Hormuz. The Islamic Republic is still holding the “Stena Impero,” claiming it failed to stop after colliding with an Iranian fishing boat. Iran has also seized other foreign oil tankers and the U.S. blames Tehran for the downing of a U.S. surveillance drone as well as a series of sabotage attacks on ships operating in the Persian Gulf.

The Trump administration late last month sanctioned Iran’s foreign minister, Mohammad Javad Zarif, in a move that has narrowed the window for dialogue with Iran. It was a decision that came after weeks of heated rhetoric between the U.S. and Iran as Washington has attempted to squeeze the regime economically and isolate it diplomatically. European signatories to the nuclear deal brokered during President Barack Obama’s administration, including Britain, have so far resisted pressure from Washington to abandon the landmark 2015 agreement that placed restrictions on Iran’s nuclear program in return for easing sanctions on its key industries, such as oil.

“Designed to provoke Tehran: Just as #Iran-UK-#Gibraltar were set to have #Grace1 tanker released today, #Trump admin moves in to spoil the effort. Will become another source of tension in Europe-US relations over Iran policy,” tweeted Ellie Geranmayeh, an Iran expert at the European Council on Foreign Relations, a think tank.

“A successful U.S. seizure of the Grace 1 tanker in Gibraltar would further increase tensions between Iran and the Trump administration,” said Rocky Weitz, the director of Maritime Studies at The Fletcher School of Tufts University.

Authorities in Gibraltar said they decided to release “Grace 1” to ease tensions. Legal action against the ship’s crew and captain, an Indian national, were dropped.

It’s not clear when the ship will leave Gibraltar, or if the Justice Department will attempt to use some other legal means to prevent the vessel’s departure.

Picardo said the U.S. has applied to the courts to further detain the tanker.

Britain’s foreign ministry said that no “linkage” should be drawn between the EU’s enforcement of sanctions on Syria and Iran’s “illegal” seizure of the “Stena Impero.”

New British Prime Minister Boris Johnson, who enjoys a good relationship with Trump, has not indicated publicly whether he intends to back Washington’s “maximum pressure” strategy over Iran that has stoked fears it could lead to military conflict. The two leaders will hold their first meeting since Johnson’s elevation to prime minister on the sidelines of a Group of Seven summit in Biarritz, France, on Aug. 24-26. 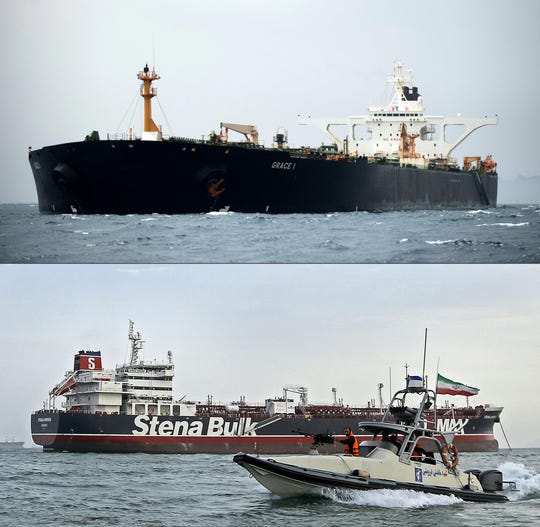 This combination of files pictures shows the supertanker Grace 1 (up) after being seized off the coast of Gibraltar on July 6, 2019, and the Iranian Revolutionary Guards patrolling around the impounded British-flagged tanker Stena Impero as it’s anchored off the Iranian port city of Bandar Abbas (down) on July 21, 2019. (Photo: AFP/Getty Images)

John Bolton visits the UAE amid tensions with Iran

Britain is finally leaving the European Union. Now what?