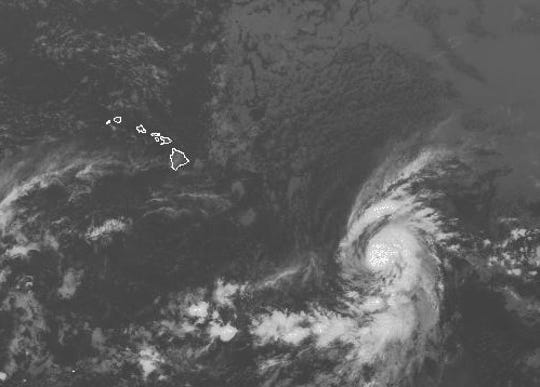 Erick has grown from a tropical storm into a “major” hurricane in the eastern Pacific Ocean and is forecast to approach Hawaii toward the end of the week, forecasters said Tuesday.

However, the Central Pacific Hurricane Center said Erick should begin losing strength Wednesday and gradually weaken back into a tropical storm before nearing Hawaii Thursday and Friday.

“Impacts such as higher surf, strong winds or heavy rainfall are possible even with this tropical system passing south of the Big Island,” the National Weather Service in Honolulu said. “These additional local island-by-island impacts are highly dependent upon the size, intensity and track of Erick as it moves through the Hawaii region. A wet weather pattern for sure.”

As of 11 a.m. ET Tuesday, Erick was located about 920 miles east-southeast of Hilo, Hawaii. It had maximum sustained winds of 115 mph and was moving to the west at 17 mph.

Another system, Tropical Storm Flossie, was also spinning in the eastern Pacific Ocean.

“Flossie is expected to strengthen to a hurricane later today, and then is forecast to become a major hurricane Wednesday night,” the hurricane center said.

As of 11 a.m. ET, Flossie was centered about 1,015 miles southwest of the southern tip of the Baja California Peninsula and was moving west at 16 mph. The storm had maximum sustained winds of 70 mph.

A tropical storm becomes a hurricane when its sustained winds reach 74 mph.

Flossie could take a similar or perhaps even more northerly track than Erick, AccuWeather said. This could put Hawaii in the forecast path of Flossie by early next week.

Closer to the U.S. mainland, forecasters were watching a system in the Caribbean Sea that has a 10% chance of becoming a tropical depression or storm within the next five days.

“This system is expected to move west-northwestward with no significant development during the next few days, producing locally heavy rainfall over Puerto Rico and the Virgin Islands, Hispaniola and portions of the southeastern Bahamas,” the hurricane center said.

All of Puerto Rico and the U.S. Virgin Islands were under a flash flood watch because of the heavy rain from the system.

“Under this weather pattern, widespread showers and thunderstorms will maintain a high risk for flooding over portions of the islands through the short-term period,” the National Weather Service in San Juan said. “As soils become saturated, the potential of mudslides in steep terrain will remain high through at least Wednesday.”

By week’s end, the system should be near Florida or the Bahamas.

Category 1 Hurricane #Erick carves out an eye. Still tracking toward #Hawaii and currently forecast to pass just south of the islands on Thursday and Friday. #HIwxpic.twitter.com/DsGz2h1gvr

What you need to do, what to skip on a first-time visit