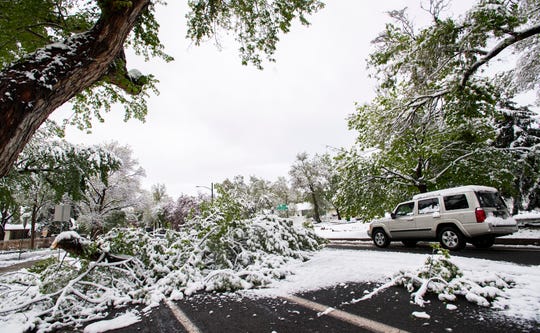 A vehicle drives around a large tree limb blocking a street in Colorado Springs, Colo., on May 21, 2019, after a spring snowstorm. (Photo: Christian Murdock, The Gazette via AP)

A surprisingly strong, late-spring snowstorm dumped more than a foot of snow around Colorado Springs on Tuesday and up to 6 inches in the Denver metro area, which broke a 128-year record for the lowest high-temperature for the date at 39 degrees.

The one inch of snow in Fort Collins was the latest measurable snow of the season on record since a half inch fell on June 12, 1947.

The snow, triggered by a winter storm rolling across the Sierras that dipped farther south than many forecasters expected, snarled roads and forced some school closings, including the University of Colorado at Colorado Springs.

The wintry onslaught was particularly hard on trees that buckled and broke under the weight of wet snow landing on freshly sprouted leaves. 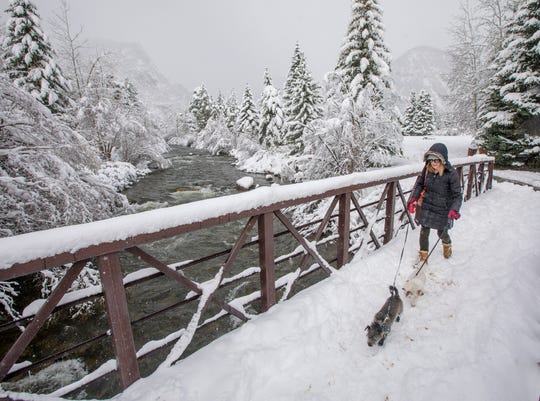 In Colorado Springs, three greenhouses at one nursery collapsed, the Colorado Gazette reported.

“We’ll have to wait for the snow to melt, and then to dismantle the structure that’s on top of the plants” to determine how many plants survived, the nursery’s general manager, Joey Clark, tells the newspaper.

In northern El Paso county, where Colorado Springs is located, as much as 20 inches of snow fell in some areas, the National Weather Service reports. At one point, snow fell at the rate of 3 inches per hour.

The U.S. Air Force Academy located north of the city registered 18 inches, according to the National Weather Service.

Boulder recorded 5.1 inches, the first time since May 25, 1950 – when 8.7 inches fell –that more than 5 inches of snow had accumulated this late in the year.

Check out this accident just south of the Garden of The Gods exit. Car slid off the road and hit one of the signs. Roads are extremely dangerous right now. @KRDONC13pic.twitter.com/gq9DuJcaY1

The NWS, which noted the record-setting high temperature for the date in Denver, said the city was on track to also tie or possibly break the low for the date of 31 degrees set in 2001.

The unexpected ice and snow in the mountains around around Denver forced the shutdown of Interstate 70 at several points over the past two days because of vehicle crashes. It also triggered the cancellation of more than than 80 flights in and out of Denver International Airport.

As the storm moves on, forecasters warn that the lower than normal temperatures could well extend the mountain snow melt into early June, increasing the risk of flooding.