U.S. Secretary of State Mike Pompeo is lashing out at Cuba and Russia for continuing to support Venezuelan leader Nicolas Maduro, saying they are contributing to his country’s economic crisis. (March 11)
AP

WASHINGTON – Russian President Vladimir Putin called Robert Mueller’s investigation “very objective” on Tuesday and said he hoped the special counsel’s final report would allow the U.S. and Russia to reboot their diplomatic relationship, which has been strained by the Kremlin’s interference in the 2016 election and questions about whether the Trump campaign colluded with Russia.

“However exotic the work of Special Counsel Mueller was, I have to say that on the whole he has had a very objective investigation and he confirmed that there were no traces whatsoever of collusion between Russia and the incumbent administration, which we said was absolutely fake,” Putin said ahead of a closed-door meeting with Secretary of State Mike Pompeo in Sochi on Tuesday.

Putin said he believes President Donald Trump “intends to rebuild U.S.-Russian relations,” and he hopes “right now the conducive environment is being built for that.”

But he warned it could further deteriorate if Putin’s government continued its efforts to undermine American democracy.

The back-and-forth about Russian election interference came during a high-stakes visit by Pompeo to Sochi, a Russian beach resort on the Black Sea, where Pompeo and Lavrov met for a wide-ranging discussion that also touched on tensions over Iran, Venezuela and nuclear arms control. Pompeo then met with Putin for additional talks on those thorny issues.

Lavrov and Pompeo took questions from reporters in Sochi before meeting with Putin.

“We hope this tumultuous situation will die down and we can finally move on to building more professional, constructive dialogue between Russia and the U.S.,” the Russian diplomat said.

Pompeo said he pressed Lavrov on Russia’s interference in the 2016 U.S. presidential election and “conveyed that there are things Russia can do to demonstrate that these types of activities are a thing of the past.”

Pompeo did not elaborate on what steps Russia could take, but he said if the Kremlin interferes in the 2020 election, “it would put our relationship in an even worse place than it’s been.”

The two men both said they had a “frank” discussion about a range of other geopolitical flashpoints, including new friction over Iran, Venezuela and nuclear arms control. Here’s a breakdown of their talks on those issues.

Kremlin officials have expressed frustration with the Trump administration’s increasingly aggressive rhetoric about the threat Iran poses – and a possible U.S. military response. The Trump administration has made isolating Iran economically and politically the cornerstone of its foreign policy.

Pompeo has warned in recent days that Iran or its proxies in the region were planning attacks on U.S. interests in the region, and the Pentagon has dispatched an aircraft carrier and B-52 bombers to the Persian Gulf to counter those alleged threats.

Pompeo declined to comment on a New York Times story published Tuesday, which said Acting U.S. Defense Secretary Patrick Shanahan presented a military plan to send as many as 120,000 U.S. troops to the Middle East in the event of an Iranian strike on U.S. forces or a move by Iran to speed up its development of nuclear weapons.

“We fundamentally do not see a war with Iran,” Pompeo said when asked about the report. He said the U.S. wants Iran to stop funding terrorist groups and to “behave like a normal country.”

Lavrov said he hoped that report was “just a rumor” and expressed fears that tensions could spark a military confrontation.

“This region is so tense with different conflicts and different situations,” Lavrov said, adding that he told Pompeo he hopes they can find a “political solution” to the Iran situation so it does not “tip over to the military scenario.”

The U.S. and Russia are also at odds over the current crisis in Venezuela, where there is an ongoing power struggle between President Nicolas Maduro and the opposition leader, Juan Guaido. Russia supports Maduro, a socialist leader who has helped steer Venezuela into a severe economic crisis.

The Trump administration backs Guaido, who has made several unsuccessful attempts to oust Maduro from power despite the forceful backing of the U.S., which has imposed a series of severe sanctions on Venezuela.

After Guaido called for an uprising earlier this month, Pompeo said Maduro was about to flee the country but was convinced to stay by the Kremlin. Maduro and Russian officials have denied that account.

State Department officials have continued to accuse Russia of meddling in Venezuela on behalf of Maduro, and Pompeo said on Tuesday that the U.S. wants “every country that’s interfering in Venezuela to cease doing that.”

Lavrov shot back by suggesting the U.S. was meddling in Venezuela’s internal affairs. “Democracy cannot be done by force,” he said.

‘We need to know why’: Lawmakers wary as Trump aides weigh military options for Venezuela

Perhaps the most consequential item on the agenda is a landmark U.S.-Russia arms control treaty called New START. Some advocates and lawmakers fear the Trump administration will abandon the treaty and spark a new nuclear arms race. 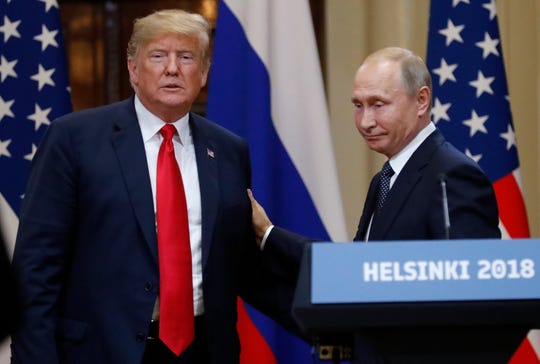 Trump administration officials say they’re pushing to broaden the U.S. pact to include China, aiming to craft a new deal that limits China’s strategic warheads and other weapons.

Trump administration officials argue that China’s growing arsenal has changed the dynamics of arms control, and this new era requires a broader approach than the New START treaty offers.

“The president has charged his national security team to think more broadly about arms control to include countries beyond our traditional U.S.-Russia framework and a broader range of weapons systems,” Pompeo said Tuesday.

But Chinese officials say they have no interest in such a deal.

“China does not see any necessity and does not intend to join bilateral talks between Russia and the U.S on nuclear disarmament,” China’s foreign minister, Wang Yi, told reporters on Monday during his own meeting with Russian officials in Sochi. “We keep our nuclear arsenal at a minimum level, the bare necessary level to maintain our defense.”

Critics have questioned the Trump administration’s quest for a tri-lateral agreement, saying it’s a risky gambit that could end up jeopardizing the New START treaty, which limits the U.S. and Russia to having no more than 1,550 deployed strategic warheads, among other restrictions. That agreement lapses in February 2021, and experts say negotiations need to begin immediately if the Trump administration wants to renew New START.

If New START is allowed to lapse, “there will be no legally binding limits on the world’s two largest nuclear arsenals for the first time in nearly five decades,” Daryl G. Kimball, executive director of the Arms Control Association, a nonpartisan nonproliferation group, wrote on a recent analysis of the nascent negotiations.

Kimball noted that the U.S. and Russian nuclear arsenals, when combined, comprise more than 90 percent of the world’s nuclear weapons. He expressed fears that the Trump administration’s position was a ruse to kill the New START treaty, not broaden it, by making unrealistic demands.

“It is more likely that Trump and Bolton are scheming to walk away from New START by setting conditions they know to be too difficult to achieve,” he added.

Pompeo declares Russia in violation of arms control agreement, sets timeline for US withdrawal from pact

‘They’re not going to be happy.’ Trump threatens Iran over reports of sabotaged oil tankers