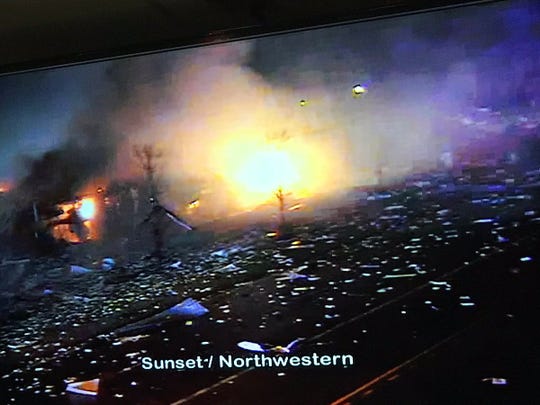 A photo of the fire at the AB Specialty Silicones Factory in Waukegan, Illinois. An explosion at the factory at 9:30 pm on May 4, 2019 injured at least four people. (Photo: Lake County (Illinois) Sheriff’s Office)

Rescue workers had to stop searching for two missing workers because of the structural instability of the fire-damaged site at the AB Specialty Silicones plant in Waukegan, Illinois, officials said. Heavy equipment will need to be brought in to search for the remaining bodies.

Four people were injured after the “ground-shaking” explosion. Multiple local residents went on Twitter to describe the huge noise and shaking that accompanied the blast just after 9:30 p.m. local time Friday night.

The plant was active and operating at the time of the conflagration, commander Joseph Florip of the Waukegan Police Department told the Chicago Tribune.

At 10 p.m. the sheriff’s office issued an alert on Twitter saying it was “aware of a very loud explosion sound and ground shaking in the Gurnee area.”

At least five other nearby buildings were also damaged in the explosion, which is estimated to have caused more than $1 million in destruction, Florip, spokesman for the Waukegan police department, told CNN.

This is the second major industrial accident in the area in the last two weeks.

On April 25 the town of Beach Park, five miles north of Waukegan, experienced a chemical leak that hospitalized 37 people, Sergeant Christopher Covelli of the Lake County Sheriff’s office said in a statement posted online. Containers of anhydrous ammonia, a fertilizer, leaked as it was being transported.

Waukegan is about 40 miles north of Chicago, on the shore of Lake Michigan.

No criminal charges against police officers