ELIZABETH, N.J. – A Canadian man who initially gained Internet fame as “Kai, the hatchet-wielding hitchhiker” has been convicted of the 2013 beating death of a prominent Clark attorney in his home.

A post on the Kai the Hitchhiker Legal Support Facebook page indicates an appeal will be filed. The post indicated McGillvary’s conviction was due to not being able to fully present his case. 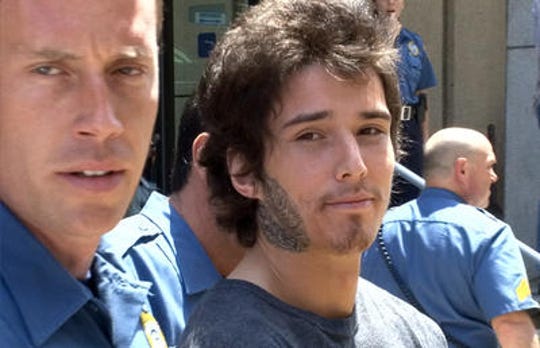 Caleb McGillivary, who is known as Kai the Hitchhiker (Photo: ~File)

On May 13, 2013 Joseph Galfy, 73, a land use lawyer, was found dead inside his Starlight Drive home in Clark. When police responded they found Galfy’s partially clothed body prone beside the bed, Union County Assistant Prosecutors Scott Peterson and Jillian Reyes, who handled the case, said in the news release.

An investigation by the Union County Homicide Task Force, led by Prosecutor’s Office Sgt. Johnny Ho and assisted by the Union County Sheriff’s Office and Clark police resulted in large quantitiies of surveillance footage, digital cell phone data and other forms of evidence that identified McGillvary as a suspect in the case, the news release states.

McGillvary was arrested in Philadelphia three days after the killing when a barista working at a coffee shop recognized him and contacted law enforcement, according to the news release.

A police investigation indicated the two men met in Times Square, New York City about a day and half before Galfy’s death.

BREAKING: In the matter of State v. McGillvary, a Union County jury has convicted the defendant of first-degree murder. Details to follow

McGillvary, who is from Canada, gained fame in February 2013 after intervening in an attack on a California utility worker in which he described using a hatchet to fend off the attacker. The YouTube video of the interview has garnered more than 1 million views.

McGillvary’s interview describing the incident went viral, and he was invited to appear on TV with Jimmy Kimmel and others.

Then on May 12, 2013, McGillvary met Galfy, in Times Square, according to a post on the Kai the Hitchhiker Legal Support Facebook page.

The two men had beers and McGillvary was invited to spend the night in Galfy’s guest room. He woke up hung over the next morning and that night called Galfy to stay in the guest room again, according to the Facebook post.

But when he woke up the next day, allegedly after his beer was drugged, he found Galfy’s partially naked body on top of him, allegedly sexually assaulting him. McGillvary fought Galfy away from him, according to the post.

McGillvary was arrested in Philadelphia a few days later, unaware that Galfy had died from his injuries, according to the Facebook post.

Pulitzers awarded to NYT, WaPo should be revoked after Mueller