WASHINGTON – When Alex Arrow tried to call his 11-year-old son on Sunday morning, the boy quickly texted back: “Can’t talk right now,” the fifth-grader told his dad, because he was heading to an Easter breakfast buffet with his mother in the Sri Lanka capital of Colombo.

Moments later, Arrow’s only child – a precocious student from Washington, D.C. – was dead, one of more than 300 victims, including four Americans, killed in a series of bombings at churches and luxury hotels in Sri Lanka on Easter Sunday.

“The terrorists didn’t know who they were killing. But we should know what the world lost,” Arrow said in a tearful interview with KTNV in Las Vegas, where he and other family members were coping with the news.

“I don’t know what is in the mind of a terrorist, but I’m sure they do not know what they took,” Arrow said. “They took a great mind who was going to be a neuroscientist and work on Alzheimer’s diseases.” 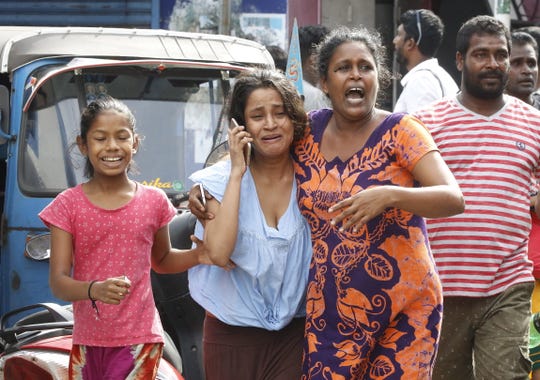 Sri Lankan people run for safety as authorities announced an evacuation of the area after a van was found parked with a suspected explosive device near St Anthony’s Church Kochchikade in Colombo, Sri Lanka on April 22, 2019.  (Photo: M.A. PUSHPA KUMARA, EPA-EFE)

The terrorists targeted Catholic churches and high-end hotels frequented by foreigners, including the Cinnamon Grand Hotel where Kiernan and his mother were dining when a suicide bomber detonated a device and unleashed chaos and death.

Kieran was hit by three pieces of shrapnel, one of which went into his heart, according to news reports.

Siblings Amelie Linsey, 15, and Daniel Linsey, who both lived in London and were dual U.S.-UK nationals, were killed while eating breakfast at the Shangri-La Hotel on what was the final day of a family vacation, according to reports. Dieter Kowalski, 40, a Denver man on a work trip staying at the Cinnamon Grand was confirmed Monday as another of the Americans who died in the explosions.

Kiernan attended Sidwell Friends School in Washington, an elite private institution, but was on leave to spend time in Sri Lanka with his mother, who survived the blast with minor injuries, according to the KTNV account.

“He had a month or two to finish in Sri Lanka and was going to come back for the summer in July,” Arrow said. He said Kieran’s mother “devoted her life to him” and wanted him to see the world.

“Her next thing was the Galapagos. That was the next thing she had planned for him,” Arrow said. “She sacrificed all of her time to be with him everywhere. To give him the culture of all of these places.”

Arrow said his son was very “self-driven” and loved learning languages, including Chinese and Sinhalese. “He was into karate … He wasn’t much for soccer or softball, but he loved karate. He played the trumpet and all the games.”

How to watch the last solar eclipse of 2019