In the early days of glamping, what most people expected to find was a bed inside of a tent and not much more. My, how things have changed. Every year, the ‘glamorous camping’ craze gets more popular and the luxury aspect of it all continues to be pushed to new heights.

Getting in touch with nature without having to rough it every night has become such an important part of the travel market that there’s now an official nonprofit association – the American Glamping Association – dedicated to “creating opportunities for new and existing business owners within the glamping industry.”

Although it’s still unclear what these opportunities will be, expect to see even more creative ways the industry will push the envelope to bring together luxury and adventure.

Here are a few recent developments we’ve found at various ‘glampgrounds,’ from safari tents and yurts to tiny houses and covered wagons. 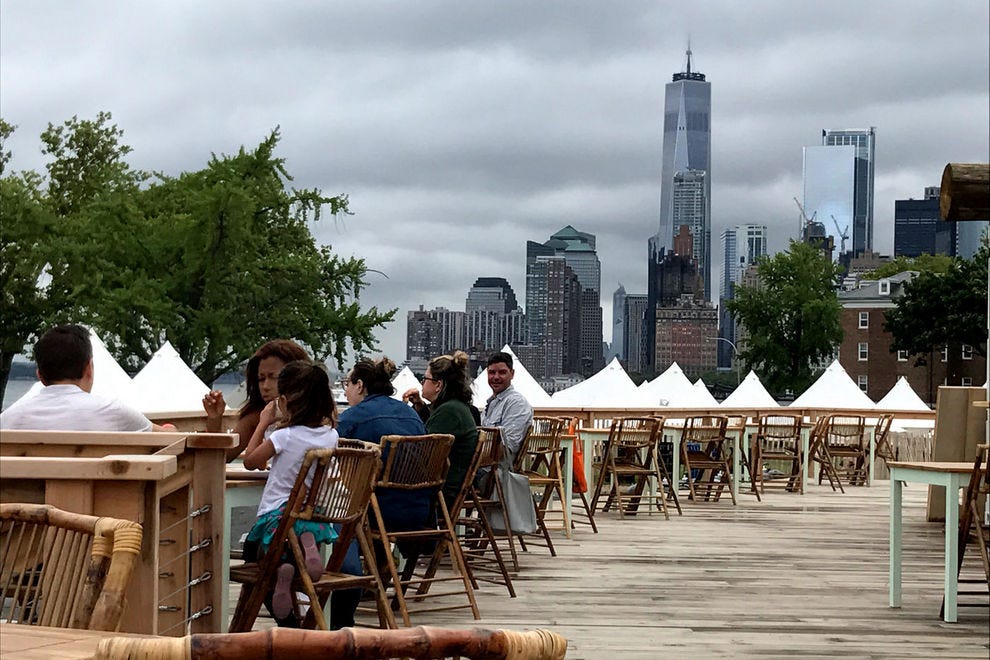 A mere five-minute ferry ride from the southern tip of Manhattan, glampers can escape the concrete jungle at this upscale camp with tripped-out safari tents on what was once an abandoned parking lot. Opened less than a year ago, the most luxurious tents here include an attached bathroom (sink, toilet and shower), wood-framed beds, reading nooks and amenities such as binoculars and board games.

Days can be spent hiking or cycling on the paved paths around Governor’s Island or whiling away the hours sitting on your tent porch with vistas of the Manhattan skyline and Lady Liberty. 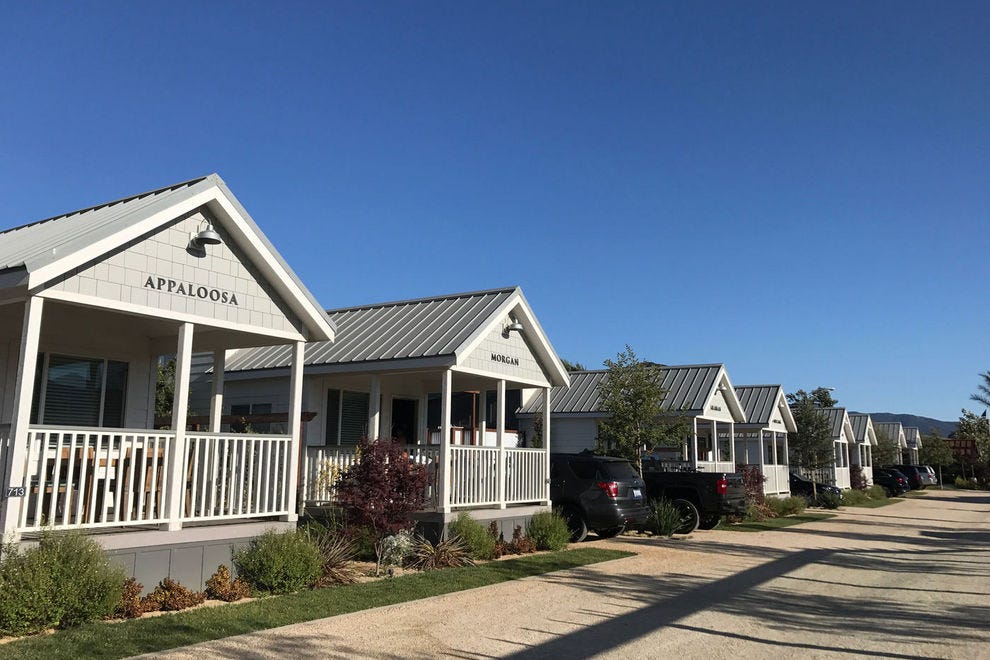 In the heart of Santa Barbara wine country, this popular RV park has added a private, gated area complete with its own private pool that is home to 19 new cottages ranging in sizes and layouts. (Imagine yourself on an episode of Tiny House Nation.)

Each cottage has a kitchen with all the necessary appliances, a private barbecue area, bedrooms, bathrooms and front porch with outdoor dining tables. There is also on-site access to a charming general store and weekend entertainment, as well as a bocce ball court.

A nice bonus is its proximity to a multitude of wineries, an eclectic Emu farm, and the never-disappointing Hitching Post restaurant nearby.

If glamping existed in the 1800s, it would look like this. The new Conestoga covered wagons located near Yosemite National Park in central California allow guests to live out a pioneer day dream without the discomfort. The covered wagons sleep four to six people and include electricity, beds, a fridge, microwave, and even air conditioning.

Restrooms and shower facilities are nearby, as are a swimming pool and volleyball courts. Cabins and yurts are also available, but come on…covered wagons. Laura Ingalls wouldn’t know what to make of it all.

Under Canvas | Tucson, Grand Canyon and the Great Smoky Mountains 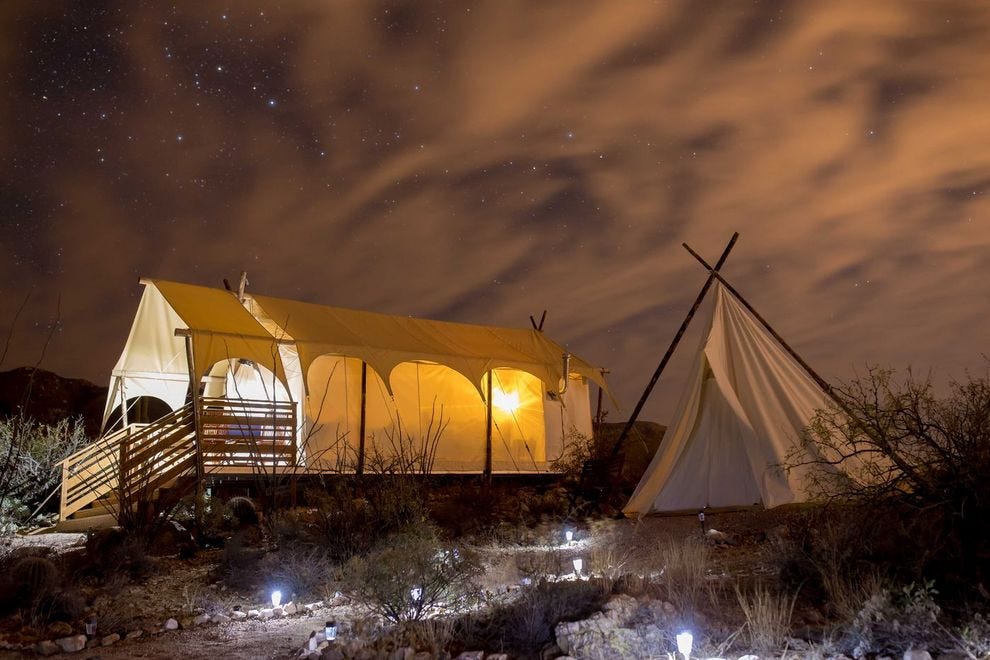 As advertised, you’ll be under a canvas when glamping — Photo courtesy of Under Canvas

Under Canvas continues to expand with a number of new locations opening n 2018, including the enchanting Grand Canyon, the stunning Smoky Mountains and the desert landscape of Tucson. They also have locations in Moab (near Arches and Canyonlands) and near Yellowstone, Glacier, and Zion – clearly expanding on their love of America’s national parks.

These sites offer some great set-ups, from a stargazing tent with a window above the bed, to a tent with its own wood-burning stove, many with their own attached bathrooms. 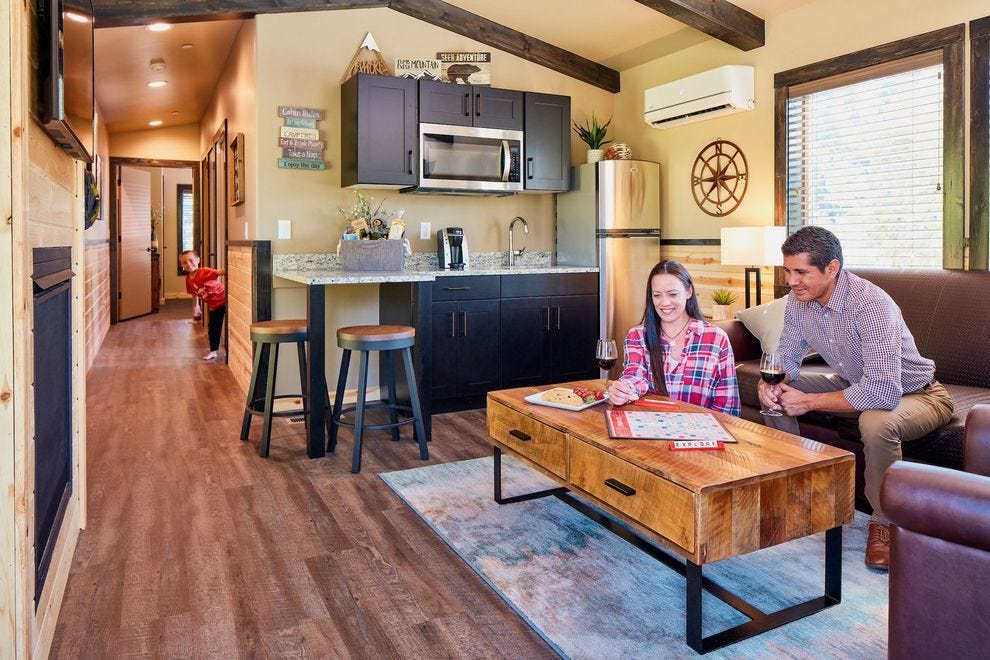 Built alongside the award-winning Tenaya Lodge, 50 new stand-alone cabins will open in summer 2019 just outside the south gate entrance to Yosemite National Park. Set among sugar pines and cedars, the 750-square-foot cabins include a wet bar, refrigerator and microwave, not to mention two bedrooms.

The 1,800-square-foot Explorer Lounge and communal fire pits will offer guests a place to meet and mingle, as well as get grab-and-go breakfast items. 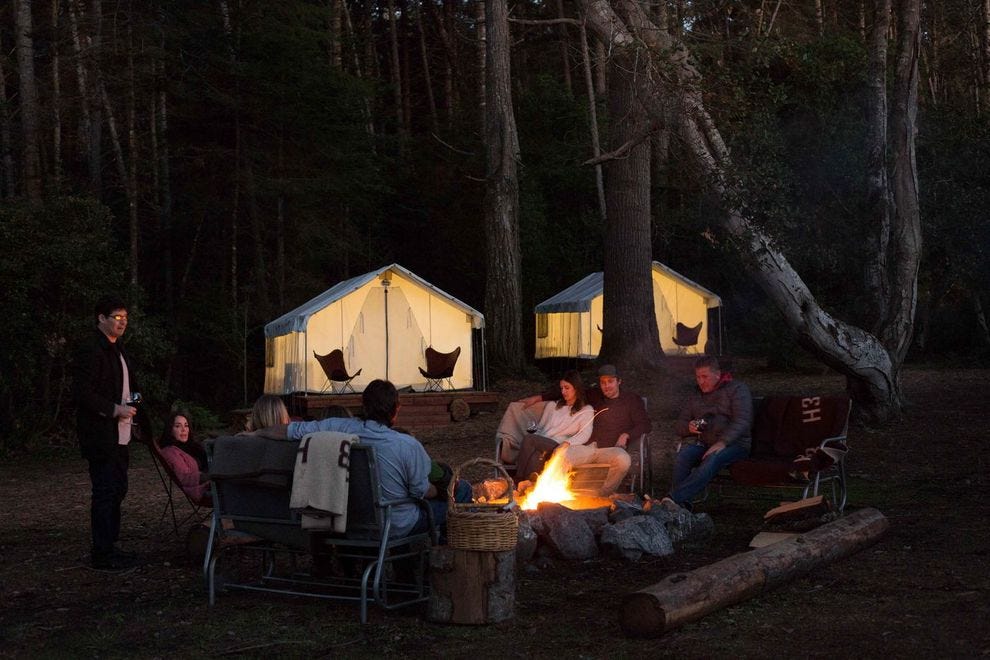 Northern California’s Mendocino Grove, on a forested bluff overlooking the Pacific, has added a “forest romance” tent located in a secluded, lush forest area of the campsite. The tent comes with amenities such as candles, robes, slippers, flowers and the new Campfire Valet™ services, during which staff will build your fire to reinforce the high-end camping experience.

There are also community campfires and a complimentary hot beverage bar in the mornings. Animal lovers will appreciate the fact that dogs are welcome and the site includes a dog run in the meadow as well as a dog-washing station.

This favorite California glamping destination has had a couple of rough years after fires and floods threatened to take out a number of accommodations set in a beautiful canyon alongside the Pacific Coast Highway. A handful of cabins that had been damaged by Mother Nature’s wrath have been patched or rebuilt, as needed, but other than the wood being a shade off in color, it doesn’t stand out.

There’s a wide range of set-ups, from safari tents to yurts to cabins with deep-soaking tubs. The camp store is stocked with Santa Barbara wines, and entertainment is offered on many nights, from live music to movie nights to wine tastings. Guests can also go on a free, guided hike to the neighboring llama and goat farm.

Google Maps adds tools to help you survive a hurricane, flood or quake

Carnival Cruise Line banned guests after they got stuck in elevator