Unless you got lost at a theater for the last decade or so looking for some Goobers, it’s obvious “Avengers: Endgame” is about to rule pop culture like Thor at a bar crawl. But a bunch of other movies belong on your must-see list this summer, from high-profile Disney redos to a freaky Euro-tripping horror flick.

Sure, superhero flicks take up a lot of real estate: Tom Holland’s Spider-Man is sort of dead as “Endgame” opens, but has a solo sequel three months later. (We’re very curious to see how that plays out.) A couple “Fast and Furious” supporting action figures get their own film, Quentin Tarantino unleashes his ninth big-screen outing, and plastic’s still fantastic in yet another “Toy Story.” In other words, there’s something for everyone’s movie tastes, at the cinema or on your favorite streaming service.

Here are the 12 films you absolutely, positively must see this summer, with exclusive photos and intel from stars and filmmakers: 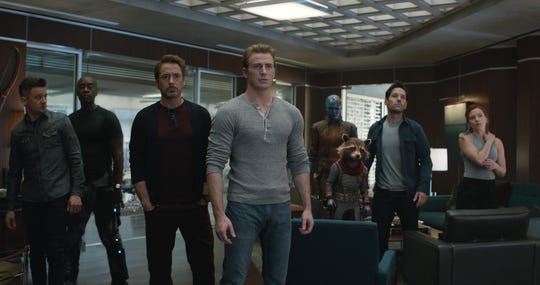 The skinny: After being bested by the cosmic villain Thanos in “Infinity War,” the original Avengers squad – including Captain America (Evans) and Iron Man (Downey) – lead an assault to avenge their fallen superfriends and throw down once again with the baddest bad guy they’ve faced yet. The veterans “have the most depth and the most breadth” since they’re the central characters in the Marvel movie narrative, says Anthony Russo. But newer heroes like Captain Marvel (Brie Larson) and Ant-Man (Paul Rudd) are also critical to “dimensionalize where we can go and surprise audiences.” 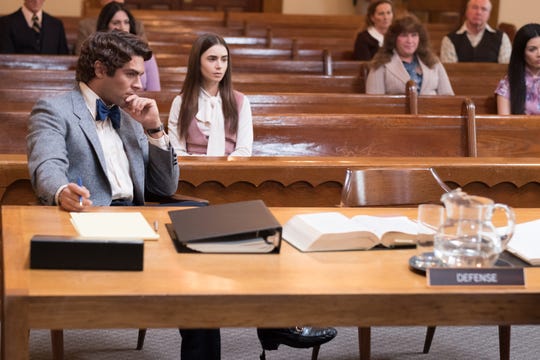 The skinny: The heinous 1970s heyday of serial killer Ted Bundy (Efron) is viewed through the eyes of his longtime girlfriend Liz Kendall (Collins). Efron admits he was initially “hesitant” to play Bundy, although he was intrigued by the psychology of the murderer and those manipulated by him. “I was blown away by how someone who was so charismatic and well-liked was also capable of the horrible acts he committed. He pulled the wool over the country’s eyes in a way that was just completely terrifying. People thought they knew him, yet they had no idea.”

The skinny: In a world where Pokemon creatures and humans co-exist, a former Pokemon trainer (Smith) wants to find his missing dad and partners with ace detective Pikachu (voiced and played via facial motion capture by Reynolds). And Pikachu’s a super sleuth, as “if Sherlock had a baby with (“Murder, She Wrote” detective) Jessica Fletcher and their child gave birth to Columbo,” Reynolds says. He also gives life to Pikachu’s high-pitched “pika pika” lines. “My voice is naturally situated at a glass-shattering pitch,” Reynolds quips. “I’ve actually worked hard to lower it every moment of my life to remain attractive to my wife.”

The Genie (Will Smith, center) makes the kingdom of Agrabah a magical, musical place in Guy Ritchie’s new live-action “Aladdin.” (May 24) (Photo: DISNEY)

The skinny: The animated musical gets the live-action treatment, with Will Smith in the iconic Genie role that Robin Williams made famous, and co-star Naomi Scott feels it’s a perfect marriage of A-list actor and over-the-top character. “Will carries a charisma and an energy that is just true to him,” says the British actress, who plays Princess Jasmine. “There’s no one else who could have done this.” Also, don’t sleep on the former Fresh Prince’s musicality, Scott adds. “When you hear the songs and his voice and the way he goes for it, you aren’t going to be able to take your eyes off him.”

The skinny: Inhabiting Elton John in this biographical musical fantasy is the role of a lifetime for Egerton. “Most of what is in the story really happened, but we’ve been able to embellish and make it all a bit magical,” he says. “It’s a story about someone going to rehab, and you can’t really tell that story without visiting some of the darkness that leads someone to go there.” Elton’s journey is also about being at peace with and loving one’s self. “It’s essentially a story about someone incredibly special and gifted. There aren’t many people who have touched the world in the same way, really.”

The skinny: In one of the most emotional X-Men movies yet, powerful telekinetic Jean Grey (Turner) is possessed by the cosmic Phoenix force, which literally and figuratively tears her apart. “It’s rare when a story has a character who inhabits both good and evil, who is both a hero and a villain,” Kinberg says. The tale is relatable “because we all know folks who have lost control,” but it’s also about the X-Men being challenged like never before. “Rather than the villain being somebody from outside, the villain is someone inside the family, and that’s also really shocking and provocative.”

The skinny: “Toy Story” regular Bo Peep (voiced by Potts) returns for this new Pixar entry to help out long-lost friend Woody (Hanks) and his pal Forky (Tony Hale) when they become separated from the rest of the gang. “As I am an older-ish actress at this point, it’s really nice to be able to play a character who still has currency and ferocity and smarts and courage,” says Potts, who’s also excited to see Bo and Woody reunited. “That unrequited love thing has been a theme for centuries, when nobody else but that one person will ever really do it for you.” 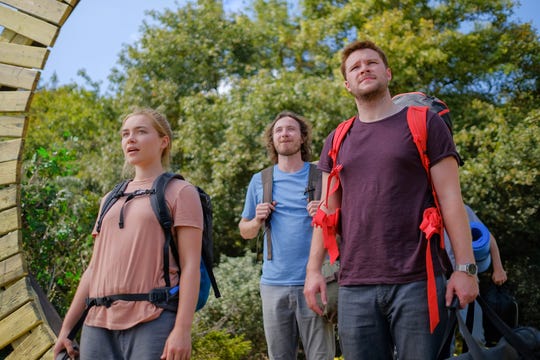 The skinny: Aster scared audiences last summer with his debut film “Hereditary,” which married family tragedy and a hearty dose of demonology. In “Midsommar,” a young woman (Pugh) who’s just suffered a brutal tragedy travels with her boyfriend (Reynor) to a Swedish village, which is home to a pagan cult with crazy rituals. “The film at its heart is a breakup movie,” Aster says. Part relationship drama and part adult fairy tale, it crosses Scandinavian folklore and mythology “with something that isn’t a million miles away from ‘Alice in Wonderland,’ but very macabre.” 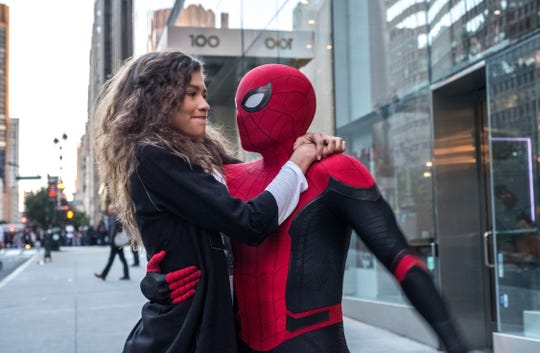 The skinny: Peter Parker (Tom Holland) and his friends – including his crush MJ (Zendaya) – go on a class trip through Europe, where Peter has to swing into action as Spidey with the arrival of the mysterious Mysterio (Gyllenhaal) and a bunch of elemental-powered supervillains. “The thing about Peter Parker that makes him so relatable is that nothing is ever easy,” Watts says. “He really just wants to have this simple, normal, relaxed vacation where the thing that he should be most worried about is whether or not MJ actually likes him back.” 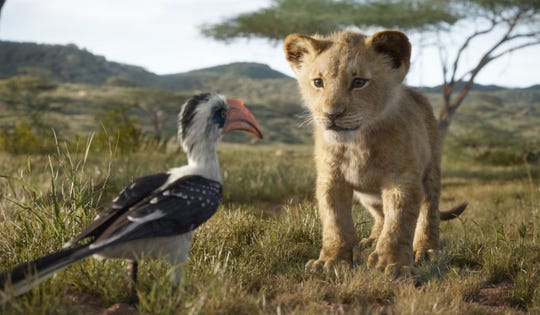 The skinny: Using animation and technology to create photo-realistic animals in “The Jungle Book” gave Favreau the confidence to take on the 1994 musical classic about young lion prince Simba (Glover) reclaiming his rightful place as ruler of Pride Rock. The humor’s been updated and the iconic moments are still there, although it’s not a shot-for-shot remake, Favreau promises. “The original holds up incredibly well, so the challenge here was to tell a story in a different way but still deliver on people’s expectations while surprising them somehow.” 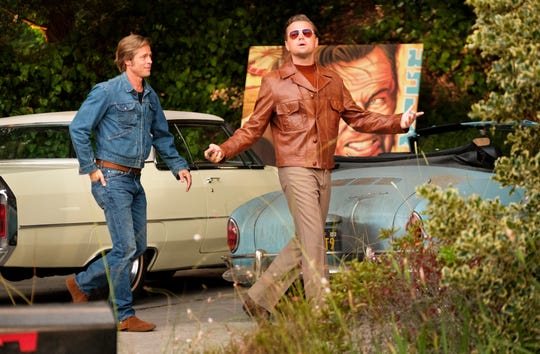 Rick Dalton (Leonardo DiCaprio) is a TV star struggling to break into the movies and Cliff Booth (Brad Pitt) is his stunt double in Quentin Tarantino’s 1969-set “Once Upon a Time in Hollywood.” (July 26) (Photo: ANDREW COOPER)

The skinny: With two A-list actors, Tarantino explores a pair of polar opposites in L.A. circa 1969. Rick Dalton (DiCaprio) starred on a popular cowboy show, yet can’t transition to the big screen. He’s “a man full of inner turmoil and self-pity for not being in a better position, career-wise. But as is Rick’s way, he blames everybody but himself,” Tarantino says. And Rick’s “indestructible” stunt double Cliff Booth (Pitt) is a World War II hero and one of the deadliest guys alive. “He could kill you with a spoon, a piece of paper or a business card. Consequently, he is a rather Zen dude who is troubled by very little.” 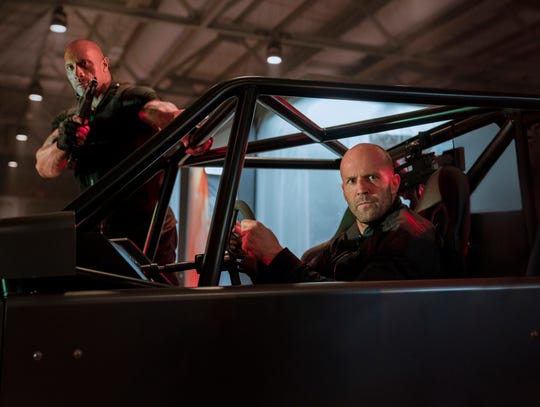 The skinny: The “Fast” spinoff finds lawman Luke Hobbs (Johnson) and mercenary Deckard Shaw (Statham) teaming up to take on a genetically enhanced supervillain (Elba) while they “give each other a hard time and try to get along. It’s like ‘The Odd Couple,’” Leitch says. And in usual “Furious” fashion, there’s as much at stake with the family as there is  nutty action spectacle. “These movies often have big world-threatening plots, and that’s not what we really care about. Our heroes are probably going to succeed, but are they going to be able to reconnect with their brother or their sister?”

NJ girl allegedly abducted, raped before being found by police in Ohio

Save big this Thursday at Amazon, Home Depot, and more

Miley Cyrus took Liam Hemsworth’s last name. Will she use it onstage?