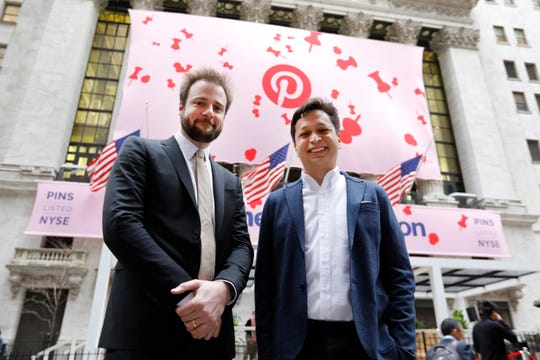 Pinterest is prepared to pin itself to Wall Street.

The digital scrapbooking site is expected to begin trading Thursday on the New York Stock Exchange – under the symbol “PINS.” The company on Wednesday priced its initial shares at $19, which could raise more than $1.5 billion.

Pinterest last week said it planned to sell 75 million shares, priced between $15 and $17 each, and could sell an additional 11.25 million shares that underwriters have the option to purchase.

The IPO price would place Pinterest’s value at about $10.1 billion, according to Bloomberg. Pinterest had previously been valued at $12.3 billion from a private funding round in 2017, Bloomberg says. Adding in restricted stock and options would value the Pinterest at about $12.7 billion, according to Bloomberg, which cited a person familiar with the matter who asked not to be identified because those details weren’t public.

Wall Street: Is the stock market open on Good Friday?

Un-carrier checking: T-Mobile gets into banking, offering 4% interest and no fees on its free checking account

Pinterest has “many positive attributes which will help support optimistic expectations,” including growth that outpaces digital media companies such as Twitter and positive usage trends, says Brian Wieser, global president for business intelligence at media investment firm GroupM, in a blog post about the IPO. “There’s no reason to expect that growth won’t continue in the near-term, even if the specific pace will be difficult to anticipate with much precision,” Wieser said.

“Astronomic valuations are popular in Silicon Valley, but there is surprisingly little real evidence supporting those valuations,” he said in a commentary on the IPO. “This $10 billion valuation reflects the wall of money looking for tech investments, rather than any fundamentals of Pinterest’s business. It is a similar story with other tech IPOs such as Uber, Lyft, and Snap.”

Thursday will see another tech IPO, that of videoconferencing tech company Zoom, which is valued at more than $9 billion, according to Bloomberg.

An IPO for Uber, expected next month, will likely be the largest in the U.S. this year, and seeks to raise about $10 billion, which would value the ride-sharing company at about $100 billion, Bloomberg says.

Competitor Lyft, which conducted its own IPO in March, now faces two class-action lawsuits, filed in California state court by investors who say the company overstated its market position at 39% in its IPO, Bloomberg reported.

Since going public, Lyft shares have declined about 18%..

How to find the best meal savings and freebies