Putting out Monday’s fire at the famed Notre Dame Cathedral in Paris was a joint effort between hundreds of firefighters, emergency personnel and modern technology.

Parisian firefighters used a combination of robots and drones to see, track and contain the blaze that ravaged the 800-year-old cathedral’s roof, spire and stained glass windows.

One instrumental player was Colossus, a water firing robot that was deployed to quell the flames from inside the smoldering Gothic cathedral after firefighters were forced to evacuate certain areas.

The tank-like robot, which was designed to transport equipment and wounded people, is equipped with cameras that allow the person who’s operating it to see what’s happening within danger zones. Colossus can be life-saving in situations where there is a risk of smoke inhalation, burns or falling debris. 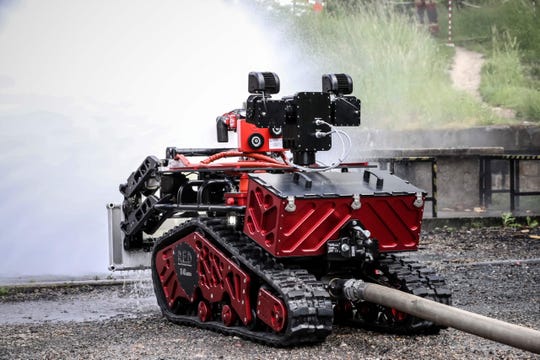 The machine was made by French technology company Shark Robotics and features a motorized water cannon that can be operated remotely. (Photo: USA TODAY)

It’s built to be operated from almost 1,000 feet away using a joystick or tablet and can withstand water exposure and thermal radiation, according to its maker Shark Robotics.

The French company, which designs and manufactures unmanned machines, says that Colossus’ modular design makes it “able to progress in every kind of ground” including climbing up stairs and maneuvering underwater.

The 1,000-plus pound machine is a slow mover, traveling upwards of 2 miles per hour, according to the website.

Learning that Emergency Response for Notre Dame also included the use of drones, made me feel good. Then seeing a female operator made me proud. Both individually are not common, both together even less. Such a difficult incident to deal with, done with exemplary. pic.twitter.com/Qdh3UIwmer

Firefighters also used drones to monitor the progression of the fire and to find the best spots to aim fire hoses, according to the Verge.

“The drones allowed us to correctly use what we had at our disposal,” Fire brigade spokesman Gabriel Plus told local media, according to the Verge.

The aftermath: What’s saved — and lost — at Notre Dame

Flight canceled, delayed in US amid storms

Number of part-time workers who want full-time has fallen