“Game of Thrones,” actors (no matter if their characters are dead or alive) try to figure out how the epic fantasy series will end.
Josmar Taveras, USA TODAY

With just five more episodes until Westeros freezes over, burns to the ground or finds a comfy middle ground, , HBO’s “Game of Thrones” (Sundays, 9 EDT/PDT) will soon be in TV’s history books, to be pored over by devoted fans and maesters at The Citadel.

And on May 20, the day after the monster Emmy-winning hit concludes, we’ll be faced with the same question that immediately follows each presidential election and Super Bowl: Who’s next?

With that in mind, we look at upcoming projects that could help fill a fantasy void bigger than The Eyrie’s Moon Door.

More: Everything you need going into season 8 of ‘Game of Thrones’

More: ‘Game of Thrones’: Every single thing you need to remember from the first seven seasons 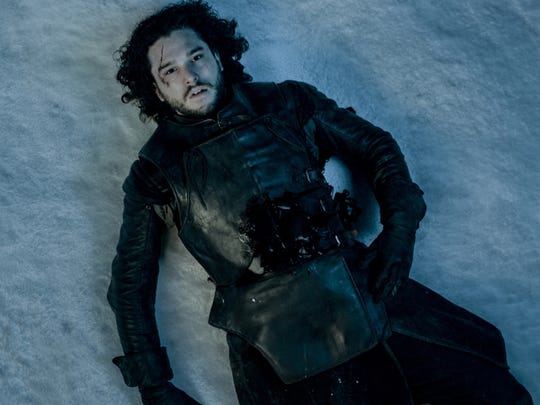 HBO will venture back well before the time of Jon Snow (Kit Harington) as it develops a ‘Game of Thrones’ prequel series.

The ‘Game of Thrones’ prequel

What better successor than a spinoff that shares the “Thrones” bloodline. Shooting begins in June on a pilot episode for a potential prequel series set thousands of years before Daenerys Targaryen, Jon Snow & Co. The show “chronicles the world’s descent from the golden Age of Heroes into its darkest hour” and promises to reveal “the horrifying secrets” of Westeros’s past, the origin of the White Walkers, the mysteries of the East and the story of the Stark family.

Naomi Watts plays the lead character – described by HBO as “a charismatic socialite hiding a dark secret” – in the prequel, from executive producers Jane Goldman (“Kingsman: The Golden Circle”) and George R.R. Martin, the author of the best-selling series that inspired “Thrones.”

The cast also features Miranda Richardson (“The Hours,” “The Crying Game”), Tony Regbo (“The Last Kingdom,” “Reign”), Jamie Campbell Bower (“Will”) and Naomi Ackie, now in the spotlight for her role in “Star Wars: The Rise of Skywalker.”

If the project is picked up to series, it’s not likely to air until late 2020, at the earliest. Four other potential “Thrones” spinoff projects developed by HBO have been sidelined.

More: HBO will soon have far more shows, but just one potential ‘Game of Thrones’ prequel

More: ‘Game of Thrones’ by the numbers: Counting episodes, Emmys, dragons and deaths

Amazon is developing a prequel series based on J.R.R. Tolkien’s “The Lord of the Rings,” which was the subject of a Peter Jackson Oscar-winning film franchise starring Ian McKellen, left, and Viggo Mortensen. (Photo: Courtesy of New Line Cinema)

‘Lord of the Rings’ series

This budget-busting Amazon  project inspired by J.R.R. Tolkien’s trilogy is the story of huge anticipation and few details. The celebrated fantasy novels spawned a blockbuster, Oscar-winning film series and serve as the basis for this enormous swing, which cost Amazon a whopping $250 million in rights fees alone and will reportedly cost at least as much to produce and market as a five-season series. JD Payne and Patrick McKay (“Star Trek Beyond,” “Flash Gordon”) are developing the saga. It’s expected to premiere by 2021.

At the Television Critics Association in February, Amazon Studios chief Jennifer Salke offered little information, including whether “Rings” films director Peter Jackson will be involved, other than saying Payne and McKay “are making great progress in developing this amazing property.” But the streaming service provided some cryptic hints and intriguing maps in a series of tweets from its “LotR’ account, @LOTRonPrime. The map is also available on the show’s Amazon webpage.

‘The Wheel of Time’

Amazon’s “The Wheel of Time,” based on Robert Jordan’s 14-book series published from 1990-2013, is another beloved fantasy world being adapted by the streaming service. Jordan’s series, which has topped sales of 90 million books worldwide, has received a high compliment: comparisons to Tolkien.

The story, which draws on European and Asian history and the cyclical nature of time found in Buddhism and Hinduism, follows five young men and women pulled into an epic adventure when one is revealed to be the reincarnation of the “Dragon Reborn,” whose prophecies can save or destroy humanity, according to Amazon. They are led by Moiraine, who belongs to a powerful group of women who can channel fire, earth, wind and water.

Rafe Judkins (“Agents of S.H.I.E.L.D.,” “Chuck”), who first become known as a 2005 “Survivor” contestant, is the executive producer and Uta Briesewitz (“Stranger Things,” “Westworld”) is directing two episodes. No premiere date has been announced, but filming is expected to begin this year.

“Good Omens,” due on Amazon May 31, is from fantasy king Neil Gaiman, writer and producer of Starz’s “American Gods”  and author of such popular novels as “Stardust” and “The Sandman.” “Omens,” which Gaiman wrote with Terry Pratchett, tells the story of an angel (Michael Sheen) and a demon (David Tennant) teaming to thwart the apocalypse and features Jon Hamm, Frances McDormand (as God) and Benedict Cumberbatch as the voice of a giant, computer-animated devil. 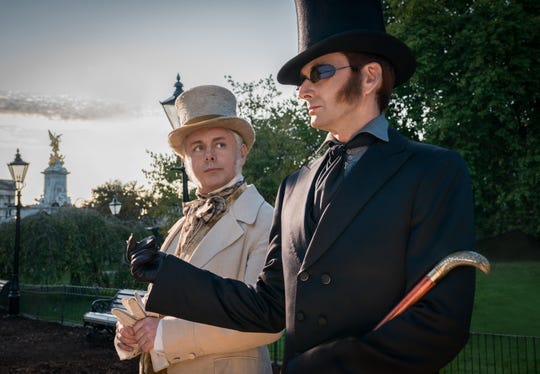 HBO has the worldwide rights to this BBC production, due this fall. Based on Sir Philip Pullman’s trilogy of fantasy novels, “Materials,” picked up for two, eight-episode seasons, travels to different worlds, including one with parallels to the Victorian Age. It features witches and armored polar bears and explores physics, philosophy and religion. The cast includes Ruth Wilson, James McAvoy and Lin-Manuel Miranda.

According to a show description, the first season follows Lyra (Dafne Keen), a brave young woman from another world whose search for a kidnapped friend uncovers a plot involving stolen children and leads her a mysterious phenomenon called Dust. In travels between worlds, she teams with a brave boy named Will in a quest with life-or-death stakes.

More: ‘Game of Thrones’: How the actors foreshadowed events (and sometimes got it wrong)

After almost a decade of dragons and battles, “Game of Thrones” is coming to an end. So, we rewatched the HBO hit from start to finish.
USA TODAY

This series is based on the post-apocalyptic “Y: The Last Man,” a 60-issue, award-winning comics series. “Y” imagines a world in which a cataclysmic event has claimed all but one man, and women establish a new world order that explores gender, race, class and survival. Diane Lane leads a cast that includes Amber Tamblyn.

This upcoming Netflix series is based on Polish author Andrzej Sapkowski’s novels and short stories focusing on Geralt of Rivia (Henry Cavill), a witcher (or monster hunter) who works solo in a world where people often are more evil than beasts. He eventually joins forces with a powerful sorceress and a young priestess.

NJ man to be charged with arson over gas cans

America’s biggest music festivals are more skippable than ever

Inventor puts his cards on the table to get investment

Why is Uma Thurman in Netflix’s teen horror series?

John Singleton to be taken off life support following stroke