NEW YORK – Nine years after her book deal was first announced, Demi Moore is ready to release a memoir her publisher calls “deeply candid and insightful.”

Moore’s “Inside Out” is scheduled for Sept. 24, HarperCollins announced Wednesday. According to the publisher, she will write openly about everything from her “tumultuous relationship” with her mother, from whom she was long estranged, to her three marriages, among them to Bruce Willis and Ashton Kutcher.

“Throughout her rise to fame and during some of the most pivotal moments of her life, Moore battled addiction, body image issues, and childhood trauma that would follow her for years – all while juggling a skyrocketing career, celebrity status, and raising a family,” HarperCollins announced. “In this emotionally charged memoir, she opens up about her career and personal life – laying bare her defining tumultuous relationship with her mother, her marriages, her struggles balancing stardom with motherhood, and her journey toward open-heartedness. ‘Inside Out’ is a story of survival, success, and surrender – as well as resilience: a wrenchingly honest portrayal of one woman’s at once ordinary and iconic life.” 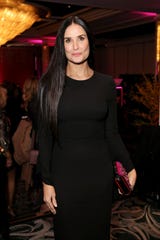 Demi Moore’s memoir has been in the works since before her 2013 divorce from Ashton Kutcher. (Photo: Rachel Murray/Getty Images for WCRF)

Moore, 56, was a high school dropout who became a television star in her early 20s on the daytime soap opera “General Hospital” and later starred in such hit films as “St. Elmo’s Fire,” “Ghost” and “A Few Good Men.” She is also a longtime activist for children’s rights and is the co-founder of Thorn, a nonprofit which combats child sex trafficking.

The deal for her memoir, reportedly worth seven figures, was announced in 2010 when she and Kutcher were still together. Moore announced in 2011 that she was ending the marriage and they divorced two years later. HarperCollins, which originally set a publication date of 2012, declined comment on financial details or whether the breakup with Kutcher contributed to the book’s delay.

‘Sesame Street’ festivals could be coming to your city

6 chefs reveal the stories behind their tattoos