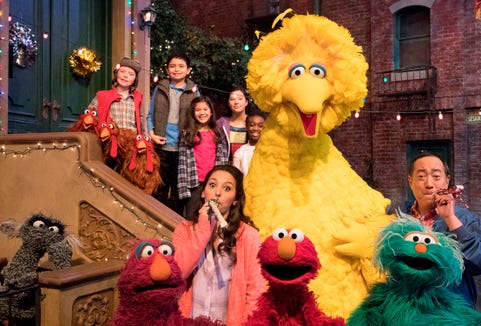 This image released by HBO shows the cast of the popular children’s show “Sesame Street.” Big Bird, Elmo and stars of “Sesame Street” are leaving their quiet neighborhood and hitting the road. The non-profit Sesame Workshop said Tuesday a selection of Muppets will embark on a 10-city trip to celebrate the show’s 50th anniversary campaign with free park festivals, live performances and kid-friendly activities. (Photo: AP)

“Sesame Street” is celebrating its 50th anniversary with a road trip.

Big Bird, Elmo and more of the famous muppets are traveling to 10 cities across the country for three-day “Sesame Street” festivals, the show’s nonprofit Sesame Workshop has announced.

“As we celebrate our decades of impact and look ahead to the next 50 years, Sesame Street’s timeless lessons remain the same: Everyone, no matter who they are or where they are from, is equally deserving of respect, opportunity, and joy,” said Sesame Workshop CEO Steve Youngwood in the release.

Families can join the crew for live performances and kid-friendly activities.

Here’s where they are headed:

More details about each event, including the specific location, will be released later.

The 50th season of “Sesame Street” begins in November.

Some Americans still doubt women's emotional suitability for politics, according to study

Ariana Grande, Grammys disagree on why she won’t perform