Thousands of tourists looking to drive down San Francisco’s “crookedest street” may soon have to pay a toll.

To reduce crowds and traffic, city and state officials on Monday announced a bill that would allow San Francisco to start a toll and reservation system for Lombard Street, one of the city’s most popular attractions.

About 6,000 people a day in the summer visit the 600-foot-long street, clogging the Russian Hill neighborhood with lines of cars waiting to zig-zag down the scenic road that’s been featured in movies.

Residents have called for solutions to the traffic jams, trash and trespassing for years. Greg Brundage, president of the Lombard Hill Improvement Association, said the proposal could alleviate congestion.

“I moved here 22 years ago, and it was nothing like this then,” Brundage told local news station KGO-TV. “Selfies! Oh my gosh! That in and of itself is an issue!”

The state needs to approve San Francisco charging people to use the public road, but city officials could determine a toll system from there. Officials said a toll system would not be implemented before 2020. 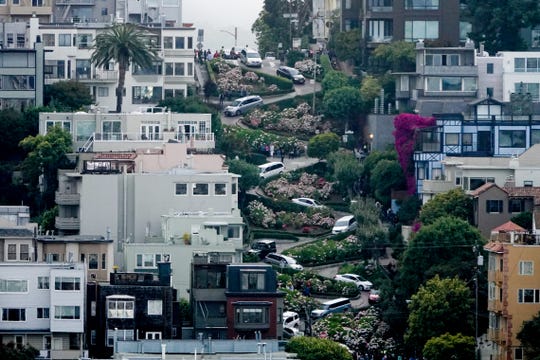 Vida Bhatt, a tourist from Melbourne, Australia, said she drove down Lombard Street with her family before parking their car and exploring by foot.

“This is one of the top attractions in San Francisco and I’m coming from so far in the world, I would pay and make sure I got to see it,” she said.

Residents built the hairpin turns in 1922 because the red brick road’s 27-degree grade was too steep for cars to climb. Lush gardens filled with hydrangeas and roses were added 30 years later.

Today, a cable car stops at the top of the street for tourists to take in the sweeping views. It can take up to 45 minutes, KGO-TV reported, just to make it to the top of the road to drive down by car.

“I’m not taking any guff from the city about how if we charge tourists $5, we’re making them unhappy,” Mann told The Chronicle. “What does it cost you for a coffee at Starbucks?”

Katy Perry goes wild for finalist's cover of her song