PARIS — The French interior minister said Tuesday that there are still some risks that may endanger the structure of Notre Dame cathedral, noting that the beloved house of worship was “under permanent surveillance” because it could still budge.

Christophe Castaner told reporters that state workers would need to wait 48 hours before being able to safely enter Notre Dame and handle the art works still inside.  “We will be standing at (Notre Dame’s) bedside,” he added.

Firefighters earlier declared victory early Tuesday, when they announced that the devastating inferno was officially put out after an intense effort to save the more than 850-year-old cathedral in the French capital.

The Paris Fire Service announced on Twitter that firefighters “came to grips with” the blaze at 3:30 a.m. Tuesday, more than 12 hours after nearly 400 firefighters had battled the flames that altered the city’s skyline. Two policemen and one firefighter had been slightly injured, according to the fire service.

Paris firefighters spokesman Gabriel Plus said “the entire fire is out” and that emergency personnel were “surveying the movement of the structures and extinguishing smoldering residues.”

One of the city’s five senior vicars, Philippe Marsset, told the Associated Press: “If God intervened (in the blaze) it was in the courage of the firefighters.”

Photos and video from inside Notre Dame showed light beams coming from the decimated wood roof, which was built from nearly 13,000 oak trees. It helped fuel the raging fire. Smoldering rubble could be seen piled up on the cathedral’s floor. And yet there were glimpses of hope – the cathedral’s frame remained strong and even candles still lit from visitors who had gone there the day before.

The cathedral’s iconic twin bell towers were visibly intact. The 18th century organ that boasts 8,000 pipes also appeared to have survived, as did all three famous Rose stained-glass windows that date back to the 13th century and other historic treasures from inside the cathedral, officials said.

Want news from USA TODAY on WhatsApp? Click this link on your mobile device to get started

Parisians and tourists from around the world had watched in horror Monday evening as flames ravaged the world famous roof, causing Notre Dame’s spire to collapse. After a night of battling flames, firefighters were able to save the landmark’s main stone structure.

The tragedy comes during Holy Week, an important event for the Catholic Church with Easter days away.

Notre Dame, the most famous Gothic cathedral from the Middle Ages, was built over a nearly 200-year span beginning in 1163 under King Louis VII. A tourist destination known for its spectacular stained-glass windows, the church has survived the French Revolution, World World I and the Nazi occupation of France during World War II.

Its many celebrated moments include the crowning of Henry VI in 1431 and the crowning of Napoleon as emperor in 1804 after he had helped save the cathedral from possible demolition.

Despite light drizzle and cloudy-gray skies, there was a sense of relief Tuesday on the streets of Paris with thoughts shifting from sorrow to action — examining what needs to be done to restore the jewel of medieval Gothic architecture.

“You can still see that the statue of the Virgin Mary is still standing,” said Catherine Oudot, 63, gesturing toward the facade of the cathedral. “It’s a relief to know that it survived. Notre Dame isn’t just a Christian landmark or a cultural landmark. It’s an absolute symbol for us, for France.”

Start the day smarter: Get USA TODAY’s Daily Briefing in your inbox

Oudet, who lives near the Eiffel Tower, was at home when she heard the fire had started.

“I saw photos and images on TV of smoke bellowing out of the cathedral. I was in shock,” Oudet said. “I couldn’t believe it. How does this happen in the 21st Century with all the technology we have: smoke alarms, fire alarms? I’m struggling to understand it.”

Paris prosecutor Remy Heitz said there’s no evidence of arson in blaze and that they believe it was an accident. The inferno could be linked to the $6.8 million renovation project underway. Heitz said the investigation will be “long and complex,” and that 50 investigators are involved in the probe.

Workers from five companies that had been hired to work on renovations to the cathedral’s roof will be interviewed, Heitz said.

A massive fundraising campaign was also underway Tuesday to rebuild the cathedral. More than $675 million has already been pledged, including a $113 million pledge from French billionaire Francois Henri Pinault and $226 million from fellow billionaire Bernard Arnault and his LVMH group.

French cosmetics company L’Oréal, along with The Bettencourt Meyers family and the Bettencourt Schueller Foundation, have said they will donate $226 million as well.

French President Emmanuel Macron rushed to the scene Monday. “We’ll rebuild this cathedral all together and it’s undoubtedly part of the French destiny and the project we’ll have for the coming years,” said Macron. 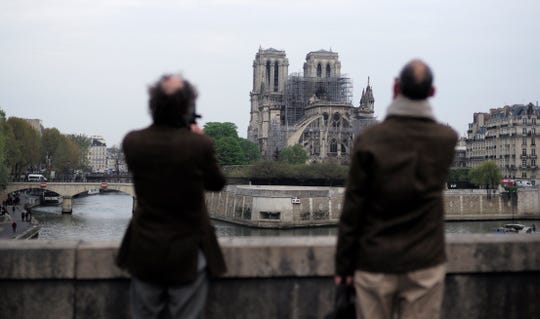 People stop to see and photograph the Notre Dame cathedral after the fire in Paris, Tuesday, April 16, 2019. Experts are assessing the blackened shell of Paris’ iconic Notre Dame cathedral to establish next steps to save what remains after a devastating fire destroyed much of the almost 900-year-old building. With the fire that broke out Monday evening and quickly consumed the cathedral now under control, attention is turning to ensuring the structural integrity of the remaining building. (Photo: Kamil Zihnioglu, AP)

More: Views of the Notre Dame Cathedral before, after, and during blaze

The Vatican said Pope Francis was “praying for French Catholics and for the people of Paris in face of the terrible fire which has ravaged Notre-Dame cathedral,” the Agence France-Presse news agency reported.

Britain’s Queen Elizabeth II said in a message to Macron: “My thoughts and prayers are with those who worship at the Cathedral and all of France at this difficult time.”

The 12th-century cathedral is one of the world’s most famous tourist attractions, immortalized by Victor Hugo’s 1831 novel “The Hunchback of Notre Dame” and visited by more than 13 million people a year.

The blaze collapsed the cathedral’s spire and spread to one of its rectangular towers in a spectacle watched by throngs of spectators. Paris Fire Chief Jean-Claude Gallet said the church’s main structure had been saved after firefighters prevented the flames from spreading to the northern belfry. “Two-thirds of the roofing has been ravaged,” Gallet said.

Emmanuel Gregoire, the deputy mayor of Paris, told BFMTV on Tuesday that he felt  “enormous relief” at salvaging prized pieces such as the purported Crown of Christ, which many believe was worn by Jesus Christ.

More: Cathedral resurrection: A look at famous houses of worship reborn after destruction

Tuesday’s good news was a dramatic shift from earlier Monday when officials predicted the structure would burn to the ground.  “Everything is burning. Nothing will remain from the frame,” Notre Dame spokesman Andre Finot had told French media.

Alain Juppe, France’s former prime minister, who went inside Notre Dame Tuesday morning to review the damage, said he was impressed with the solidarity that people inside and outside France were showing toward the country.

“We need to save her,” Juppe said, calling it a “miracle” that many of the artifacts and historic treasures appear to have been preserved.

Thibault Verny, Paris’ deputy bishop, told USA TODAY that he was feeling “very sad” about what happened but it was a “great moment” for the country to come together.

“On (Easter) Sunday we will celebrate the resurrection,” he said as he walked across the main square in front of the cathedral. “My message will be one of hope and that we need to push ahead.”