This is a look inside Notre Dame after a fire engulfed parts of the cathedral for more than 12 hours.
USA TODAY

The Notre Dame Cathedral will survive a massive fire that threatened the 800-year-old Parisian landmark and, in it, one of the most famed examples of French Gothic architecture in the world.

Built over nearly two centuries starting in 1163, the cathedral underwent restorations in the mid-19th century — thanks in part to the popularity of Victor Hugo’s novel, “The Hunchback of Notre Dame.”

The structure took on hints of both Naturalism and Renaissance styles, but it predominantly embodies the French Gothic style that favors giant, cavernous spaces propped up by flying buttresses and windows laced with ornate lines, Encyclopedia Britannica notes.

“Religiously, as a piece of architecture that signifies Catholic tradition to its highest, it is one of the key monuments out there,” said Krupali Krusche, a historical preservation expert at Notre Dame University in Indiana. The cathedral houses irreplaceable artworks, too, at least some of which is safe.

Here are key architectural highlights of Notre Dame Cathedral, as noted by the cathedral’s staff and others:

The cathedral’s 295-foot spire, which collapsed amid flames Monday, was not the structure’s first. The original spire was built around 1250, according to the cathedral, before becoming dismantled during late 18th century. It was replaced after 1860 with the spire lost Monday, which was adorned with statues of the 12 apostles and creatures symbolic of the Bible’s gospels. 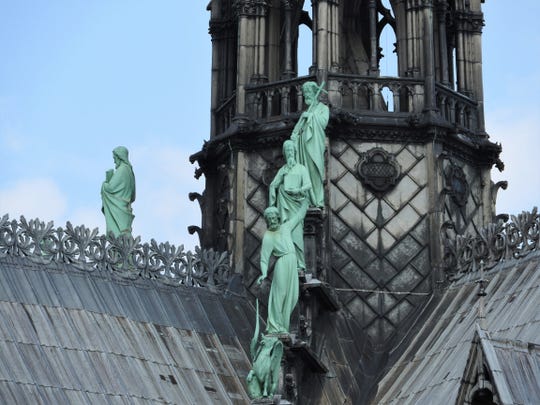 Statues of the apostles on the roof of Notre Dame. (Photo: Konstantin Litvinov, Getty Images/iStockphoto)

The cathedral’s website said its three stained-glass rose windows, “constitute one of the greatest masterpieces of Christianity.” The windows debuted in the 13th century, with the South Rose boasting 84 panels spread across four circles, the cathedral notes. 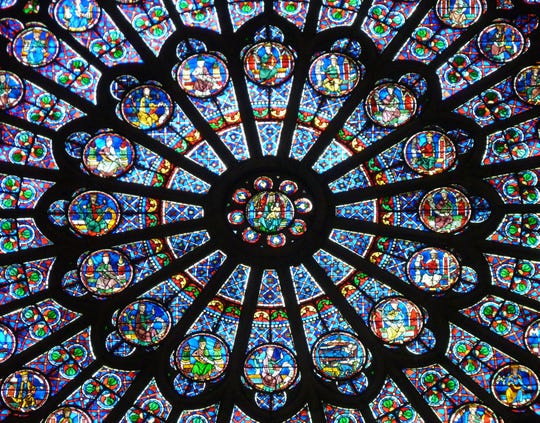 Builder Jean Ravy ordered the cathedral’s iconic flying buttresses, exterior braces that uphold the building while letting the interior walls stay visually clear of support structures, according to National Geographic. On the cathedral’s east end, the single-arch flying buttresses are “especially notable for their boldness and grace,” Encyclopedia Britannica notes.

Below that row, three doors (or portals) offer entry into the church. They include the center door, the Portal of Judgement, built last by 1230 and depicting the Christ’s judgement from the Bible. To its right is the Portal of St. Anne, built first around 1200 and featuring Mary with a young Jesus flanked by statues of St. Peter, King David and more. The left door, the Portal of the Virgin, was built by 1220 and tells the story of Mary’s death and ascent to heaven as told in church tradition. 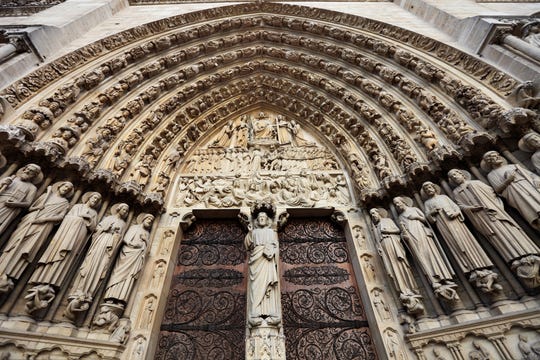