A team laying pipes at a chalk stream in Oxfordshire, England, uncovered an ancient settlement with 26 skeletons, some of which may have been part of “human sacrifice,” archaeologists said. (Photo: Thames Water)

More than two dozen ancient skeletons were unearthed during a recent dig as part of a water project in the United Kingdom, and some are believed to be the victims of “human sacrifice,” archaeologists say.

Dating almost 3,000 years to the Iron Age and Roman periods, 26 human skeletons, some that may have been part of ritual burials, were discovered in an ancient settlement as workers dug in the Letcombe Brook in Oxfordshire, England, Thames Water said in a statement Monday.

Archaeologists have removed the skeletons and other items found at the site, including evidence of dwellings, animals and household items, Thames Water said.

The chief executive of Cotswold Archaeology, Neil Holbrook, said the site “was particularly fascinating as it provided a glimpse into the beliefs and superstitions of people living in Oxfordshire before the Roman conquest.

“Evidence elsewhere suggests that burials in pits might have involved human sacrifice,” he added in a statement.

Thames Water, which serves Greater London and surrounding areas, was planning to lay pipes in an effort to preserve the chalk stream. The project will continue now that the artifacts have been removed, the company said. 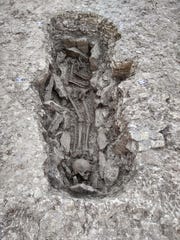 The finding “provided a glimpse into the beliefs and superstitions of people living in Oxfordshire before the Roman conquest,” said Neil Holbrook, chief executive of Cotswold Archaeology. (Photo: Thames Water)

“These findings open a unique window into the lives and deaths of communities we often know only for their monumental buildings, such as hillforts or the Uffington White Horse,” Paolo Guarino, a project manager at Cotswold Archaeology, said in a statement.

“The results from the analysis of the artefacts,  animal bones, the human skeletons and the soil samples will help us add some important information to the history of the communities that occupied these lands so many years ago,” he added.