Kevin Mark expressed a sentiment expressed by many sports fans over the weekend:

“If you’re a fan of a local sports team and like watching them on a regional sports network, cutting the cord is almost never an option.”

He was writing on Twitter in response to our latest cutting the cord piece, which suggested that in the wake of price hikes from the cable alternatives YouTube TV, DirectTV Now and Hulu, that Sling TV and Philo were worth checking out due to their lower prices.

The issue of ditching cable, buying an antenna, or subscribing to one of the many sporting networks touted via streaming devices like Roku or Amazon Fire TV is a big one among sports fans.

If you’re a fan of a local sports team and like watching them on a regional sports network, cutting the cord is almost never an option. https://t.co/kVv8g76nr0 via @usatoday@jeffersongraham

“People don’t understand why they can’t get their sports by cutting the cord,” says Phil Swann, who runs the TV Answer Man website.

Philo doesn’t carry sports, but Sling TV is targeted to the sports fan, and is pushing a  basketball promotion offering the service for $15 monthly, for the first three months. It then goes back to $25 monthly, which is about half the price of YouTube TV, Hulu and DirecTV, which are in the $50 range. Sling touts access to all the playoff games on NBA.TV, ESPN and TNT.

More: Cutting the cord: Save money with Sling or Philo

More: Is cutting the cord on your mind? Here’s what you need to know 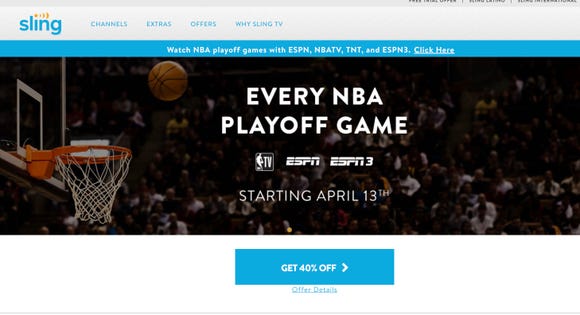 Sling, however, has two packages, Orange and Blue, each with different channel lineups. You may need to get both to pick up access to all the channels you’re interested in.

However, even with paying to watch brings in a new wrinkle: blackouts for local games.

Sports fans want to subscribe to their teams and watch them on streaming without having to authenticate it with a cable or satellite subscription, and not have to suffer from blackouts of their local teams, “and they get very frustrated,” says Swann.

“It’s frustrating for me,” so he’s sticking with DirecTV on satellite, because he gets to see the games.

YouTube tv offers all ours except MSG. But we get Yankees and Mets

Luke Bouma, who runs the Cordcuttersnews.com website, insists that 90% of sporting events can be seen via streaming, but just cutting the cord, adding an antenna and hoping to see all the games via broadcast TV won’t work, due to rights issues. You’ll have to pay.

“A growing number of cord cutters just subscribe to a Sling TV or YouTube TV during football season for example,” he says. “A lot of MLB fans or NBA fans who live outside of their home market just pay for the MLB.TV or NBA League Pass.”

He’s posted a handy guide on his website to cutting the cord and sports.  https://www.cordcuttersnews.com/the-ultimate-cord-cutting-guide-for-sports-fans-updated-december-2018

However there’s still the issue of blackouts. MLB.TV, for instance, which charges $118 yearly for access to all the games, will allow access to local games, but only 90 minutes after their conclusion.

Swann has a workaround for watching live. A VPN, or virtual private network app.

It’s a “gray area,” he admits, that tricks the provider into thinking your IP address is from out of the area, and thus, allows you watch the local game. “It’s the best for sports fans.”

PHILADELPHIA, PA – APRIL 13: Jimmy Butler #23 of the Philadelphia 76ers handles the ball against D’Angelo Russell #1 of the Brooklyn Nets during Game One of Round One of the 2019 NBA Playoffs on April 13, 2019 at the Wells Fargo Center in Philadelphia, Pennsylvania NOTE TO USER: User expressly acknowledges and agrees that, by downloading and/or using this Photograph, user is consenting to the terms and conditions of the Getty Images License Agreement. Mandatory Copyright Notice: Copyright 2019 NBAE (Photo by David Dow/NBAE via Getty Images) (Photo: NBAE/Getty Images)

Here’s what available on the top cable alternative services:

— Sling TV: ($25 monthly, $15 in special three-month promotion). “Is the cheapest of the options, and it has most of the regional channels, but not all,” says Swann. The Orange offering ($25 monthly) has ESPN, ESPN 2, ESPN 3 TNT, TBS, while Fox Sports and FS1 and FS2 are on Blue. A combo price of $40 gets both, but note that Sling doesn’t get CBS or ABC, so you’ll need an antenna to pick up those channels.

— DirecTV Now ($50 monthly, or $70 monthly for additional channels). Along with the four broadcast and many cable networks, DirecTV Now has ESPN and FS1, but you’ll need to pay the higher rate to get access to other sports networks like FS2, Golf Channel and MSG.

Anthropologie is having another massive sale this weekend

A few factors to consider to secure $1 million for retirement.