The Tampa Bay Lightning’s stars seemed to be everywhere this season when the team led the NHL in scoring at 3.89 goals per game.

But the team’s top offensive players seem to have disappeared in the playoffs. Nikita Kucherov, Steven Stamkos, Brayden Point and Tyler Johnson combined for 156 goals in the regular season. In the first two games of their playoff series against the Columbus Blue Jackets, they have no goals, no points and a collective plus-minus of -9.

Their lack of production is a primary reason why the Blue Jackets lead 2-0 going into Sunday’s Game 3 (7 p.m., NBCSN) in the best-of-seven Eastern Conference quarterfinal.

Making the situation worse, the NHL has suspended Kucherov for Game 3 for boarding Markus Nutivaara.

The Lightning tied the 1995-96 Detroit Red Wings’ record of 62 wins in a regular season. But they didn’t want to get upended in the playoffs, as Detroit did. 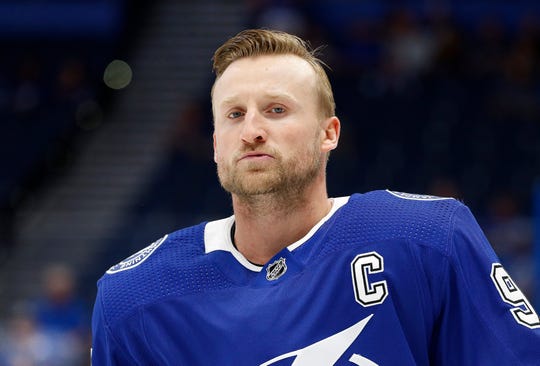 Tampa Bay Lightning star Steven Stamkos has no goals or points in the first round against the Columbus Blue Jackets. (Photo: Kim Klement, USA TODAY Sports)

Coach Jon Cooper has called the Lightning’s situation “a five-alarm fire.” They didn’t face adversity in the regular season.  It’s fair to question whether they are ready to handle it.

What’s happening in other playoff series:

Any doubts about whether Robin Lehner could continue his strong goaltending in the postseason has been erased by his .948 save percentage after two games. Coach Barry Trotz has helped the Islanders more than a top draft pick could. He has given this team a chance to win it all.

But don’t write off the Penguins just yet. Trotz won’t get the matchups he wants in Pittsburgh. You’d expect Sidney Crosby and Jake Guentzel to be more dangerous in Pittsburgh. The Penguins also need is a memorable game from goalie Matt Murray. His save percentage is .896.

The Hurricanes have been the better team much of this series. What you are seeing is the difference between a defending champion that understands exactly what a team needs to do to win a series and an upstart team trying to figure out what needs to be done.

The Hurricanes are spunky, but they’re also young. Plus, this franchise is in the playoffs for the first time since 2009. Alex Svechnikov, a critical Carolina player in this series, was 9 then.

You can feel these teams’ dislike for each other. When the Bruins are engaged, as they were in Game 2, they are the better-rounded team. The Maple Leafs would need Frederik Andersen and Auston Matthews, Mitch Marner or John Tavares to take over the series to win it.

The Bruins won’t be complacent. They lost Torey Krug in Game 2 on a heavy hit. His status is unknown. Toronto’s Nazem Kadri faces a long suspension for his cross-check to Jake DeBrusk.

This will be the first round’s most entertaining series. The two teams have combined for 15 goals in two games. The winning team has scored five both times.

The Sharks say they are confident in goalie Martin Jones, even though San Jose ranked 31st in team save percentage this season. But San Jose’s fan base seems worried about the Golden Knights’ perceived goalie advantage. The value of San Jose’s overpowering offense is diminished by its propensity for giving up goals.

The Blues continue to show why they were one of the league’s top teams in the second half of the NHL season. They are winning the goalie battle.  Rookie Jordan Binnington (2.00 goals-against average) is outplaying Connor Hellebuyck (3.08, .897). 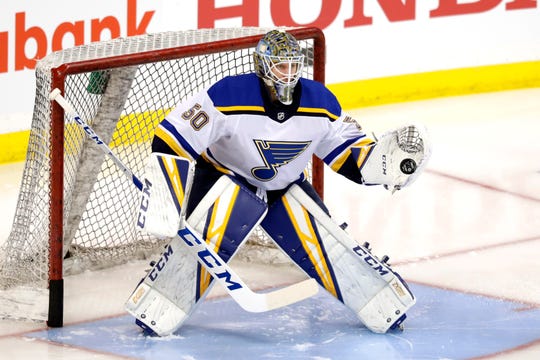 St. Louis depth players have stepped up, particularly Oskar Sundqvist, who had two goals in Game 2. Meanwhile, the Jets simply haven’t been the dangerous team we thought they would be this season.

This is an old-school series. Low scoring. Emphasis on goaltending and defense. The first two games were decided by a goal. Secondary scoring and save percentage will probably decide it.

Craig Smith scoring the overtime goal in Game 2 is a good sign for the Predators. Coach Peter Laviolette has been trying to get more from his second line.

The Stars were ranked 29th in scoring this season. Goalie Ben Bishop has stopped 71 of 75 shots in this series. He will have to continue to play this sharply for the Stars to win.

It was nearly 2-0 Calgary, but the Avalanche tied Game 2 in the final minutes and Nathan MacKinnon won it in overtime with a powerful shot. MacKinnon has 12 shots in the series, and the Avalanche will try to free him up with the last line change in Denver to make him more dangerous.