Not many 17-year-old singers can have grown men go from moshing to belting slow ballads in a crowd of thousands. Billie Eilish can.

Her performance had its flaws: at times she ran out of breath, she forgot the lyrics and she tripped on stage.

Despite her international claim, she displayed a raw youthfulness — something her fans appreciated. They didn’t come to see perfection. They didn’t wait 40 minutes to see a polished Billie.

They came for the girl who stopped her set and asked, “Can I have some water please? I got asthma.” 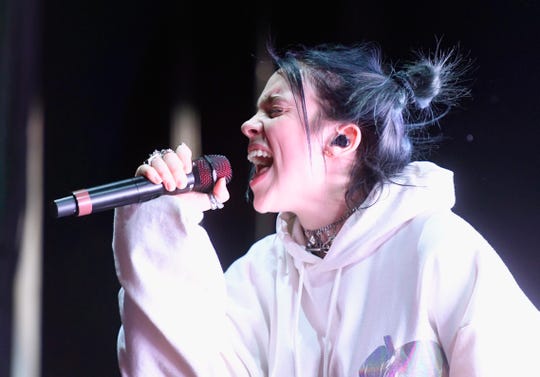 They came for the one who stopped her set to ask the crowd to open a mosh pit.

After starting her Coachella set almost 40 minutes late, causing hundreds of upset fans to leave, Eilish emerged from the center of the stage wearing baggy shorts and a sweatshirt to a sea of roaring fans. Despite the delay, the crowd was one of the largest in recent memory at the festival’s Outdoor Theatre.

One guy standing and waiting knew it was worth the wait.

Her performance, in between main stage sets from Weezer and Tame Impala, gave West Coast fans one of the first chances to see her perform tracks from her new album, “When We All Fall Asleep, Where Do We Go?”

She opened with “bad guy,” and as she zigged and zagged, fans belted out the lyrics with Eilish and screamed any time the music stopped.

Before starting “you should see me in a crown,” Eilish urged her fans to open a pit near the stage. “Open it up, bro. Open it. I don’t care if you think you’re cool.”

She followed with “my strange addiction,” another crowd-pleaser. After hundreds of fans left during the delay, many returned to pack the area around the Outdoor Theatre.

After her first three songs, Eilish opted for two quieter numbers as a dance crew rolled in on a bed onto the stage.

She also performed “wish you were gay.”

She kept it humble, at times questioning if she even deserved “this.”

“I used to sit in my room and cry because I wanted this so bad.”

After playing in Australia and New Zealand, Eilish will return to the U.S. in the summer and perform four dates in Southern California, all of which have sold out, according to her website. Individual tickets start around $230 on resale sites.

Related: I watched Donald Glover, Rihanna’s ‘Guava Island’ at Coachella. Here’s what you should know

New-look offense makes too much sense

‘Us’ is out! Here’s what critics think of Jordan’s Peele’s horror film