Southwest Airlines, which has faced widespread customer wrath for its handling of flight cancellations since the grounding of the Boeing 737 Max last month, said late Thursday that it is removing Max 8 flights from its schedule into early August.

The move means the airline will cancel 160 daily Max-related flights into the peak summer travel season. The airline, which has more Max 8s in its fleet than any other U.S. carrier, had previously taken the plane out of its schedule through June 7.

Southwest President Tom Nealon announced the extension in a letter to customers posted on the airline’s website.

“While the timing for the return to service of the MAX remains unclear, what is very clear is our commitment to operate a reliable schedule and provide the famous customer service you expect from us,” Nealon said in the letter. “Our revised summer schedule allows us to accomplish those objectives.”

Nealon apologized in his letter to customers, the first time a Southwest executive has publicly acknowledged issues caused by the usually beloved airline’s handling of the Max 8 cancellations.

“While the vast majority of our customers’ itineraries have remained unaffected, flight schedule changes have inconvenienced some of our valued customers, and for that, I offer my sincerest apologies,” he said.

Nealon said the “limited number” of travelers who have already booked their summer travel on Southwest will be notified so they can rebook their flights well in advance, giving them more options.

More: Southwest flight canceled? Here’s why the airline won’t put you on another carrier

Southwest has now taken the Max 8 out of its schedule longer than any U.S. airline operating the plane that was involved in two fatal crashes in five months. That led to FAA grounding of the planes on March 13. Southwest and American operate the Max 8, United the Max 9 model. United has 14 Max 9s.

American said on Sunday that it would reduce its schedule through June 5, beyond the April 24 date it previously announced. The move affects about 90 daily American flights. The airline said it will notify affected travelers by email or phone. 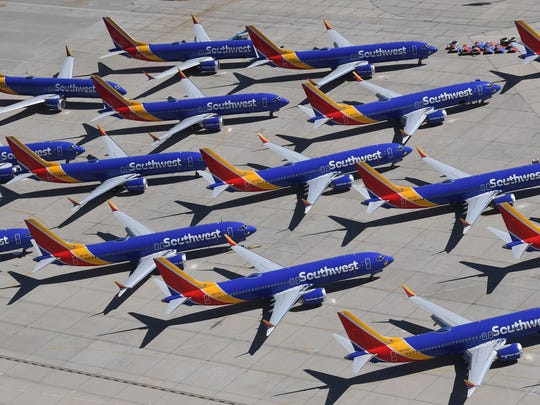 Southwest Airlines Boeing 737 MAX aircraft are parked on the tarmac after being grounded, at the Southern California Logistics Airport in Victorville March 28. After two fatal crashes in five months, Boeing is trying hard to present itself as unfazed by the crisis that surrounds the company. (Photo: MARK RALSTON, AFP/Getty Images)

More: You don’t have to be on a 737 Max to be affected by the FAA grounding

More: Boeing 737 Max: How many of these planes fly for Southwest, American, United, and where?

More:  5 tips for flyers affected by the Boeing 737 Max cancellations

Chinese group to get control of Japan Display after $2.1 billion bailout

Where to find the best massages and treatments