Riddell, who has already publicly apologized for what he called his “needless actions,” was standing before U.S. District Court Judge Nathaniel Gorton, who accepted the plea agreement. His sentencing date is July 18.

“No, your honor, I do not,” Riddell said when asked by the judge whether he disagrees with any of the charges described by prosecutors.”

More: The ‘really smart guy’ who aced SATs for rich students: ‘I will always regret’ the scandal 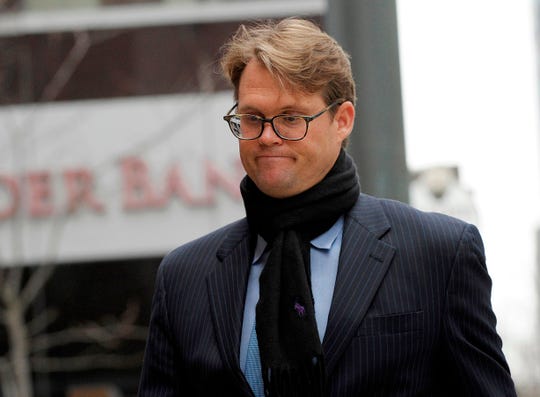 Riddell, 36, faces maximum penalties of up to 20 years in prison, supervision for three years and a fine of $250,000. But prosecutors have recommended that his jail time and fees be at the “low end” of the sentencing ranges because of his guilty plea. Riddell would have to forfeit $239,449 that he made from the scheme.

Riddell joins the main participants in the reported college admissions scheme who have pleaded guilty to charges. Others include Rick Singer, the alleged middleman who accepted bribes of parents to get their children into school, and former Yale women’s soccer coach Rudy Meredith, whose cooperation with prosecutors is seen as the key domino that helped open the case for the FBI.

Earlier this week, 13 parents, including actress Felicity Huffman, agreed to plead guilty to bribery and other forms of fraud to get their kids into elite colleges and universities.

Prosecutors say Riddell, a private school counselor at IMG Academy who resides in Palmetto, Florida, sometimes took the tests for the students himself and in other instances corrected their answers after their test was turned in. They say the scheme lasted from 2011 to February. 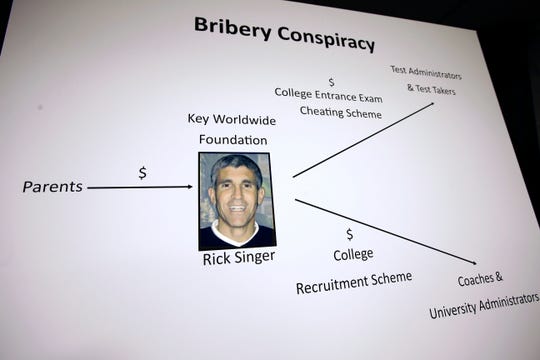 A poster containing a photo of William “Rick” Singer, founder of the Edge College & Career Network, is displayed during a news conference Tuesday, March 12, 2019, in Boston, where indictments in a sweeping college admissions bribery scandal were announced. (Photo: Steven Senne, AP)

Separately, other parents accused in the conspiracy allegedly paid Singer to bribe college coaches in exchange for classifying their child as an athlete on their team as a way get them admitted into a school.

Riddell, a former soccer player at Harvard University, not only had the ability to ace the exams, prosecutors say, but he could also achieve an appropriate score that would not raise the suspicion of the test companies by increasing too much.

Parents involved in the cheating scheme would make donations to Singer’s college counseling organization. To facilitate the cheating, prosecutors say Singer often counseled parents to seek extended time on the children’s SAT or ACT exams by having their children pretend to have learning disabilities.

Two test administrators, who are also defendants in the case, were allegedly paid off to allow Riddell to take the tests for students or change their answers. In one instance described in his indictment, Riddell flew to Houston on July 13 and took the test in a hotel room later that day.

In his public apology in March after being arrested, Riddell said he understands how his actions “contributed to a loss of trust in the college admissions process” and that he accepts “full responsibility for what I have done.”

But he sought to clarify that he “absolutely, unequivocally never bribed anyone,” rejecting an assertion that he claims has has risen in media coverage. The Justice Department has not accused him of bribery, but rather accepting the payments.

“I will always regret the choices I made, but I also believe that the more than one thousand students I legitimately counseled, inspired, and helped reach their goals in my career will paint a more complete picture of the person I truly am,” Riddell said last month.

We've got the first image, what happens now?

Tornadoes roar through nation, worst may coming Sunday and Monday