What’s next, a unicorn in Times Square?

Expect camo-free photos and at least some technical details July 18, at a location that’s TBD, but should be easy to find: Follow the whooshing sound of every auto writer in the world panting.

The new ‘Vette is expected to go on sale in 2020. It’s the eighth generation of America’s greatest sports car, and the most radical engineering change since the first Corvette debuted in 1953. 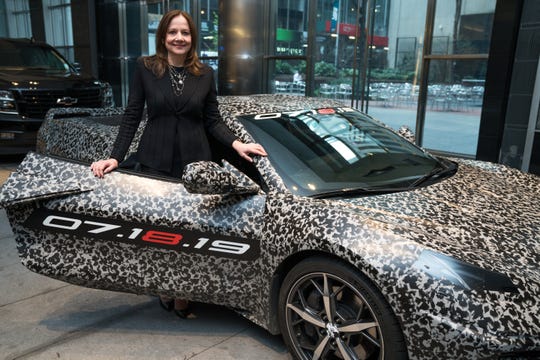 That’s because the engine moves from under the hood to tucked between the passenger compartment and the rear wheels — mid-engined, as in the middle of the car. You can tell by the car’s short hood and big air scoops just ahead of the rear wheels. The scoops pull in air for the engine, which is reported to be a version of the current Corvette’s V8.

The proportions are new, but the styling is recognizably Corvette. You might think “nice ‘Vette” if you saw the new car’s nose and lights in your rearview mirror, based on what you can tell under the camouflage.

Barra was in New York for the Stephen Siller Tunnel to Towers Foundation’s annual Footsteps to the Future Gala.

Nearly all the world’s fastest and most maneuverable sports cars have their engines behind the passengers. The layout improves handling because it puts the engine’s weight in the middle of the car. That layout, with maybe a little more than 50% of the car’s weight on its rear axle, provides good balance and plenty of grip in corners. The layout also lends itself to great traction for the rear wheels, hence fast starts.

Chevy engineers have dreamt of a mid-engine Corvette for decades. 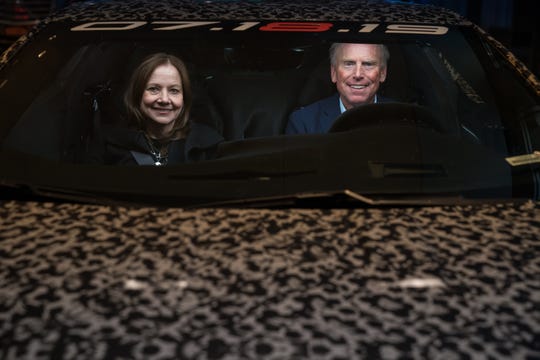 Legendary Corvette chief engineer Zora Arkus-Duntov toyed with the idea, but never got it done. His last words as he left work upon retirement in 1975 were reportedly to tell new chief engineer Dave McLellan the mid-engine ‘Vette was now in his hands.

Reinventing a legend takes money, nerve and inspiration. Over the years, plans for mid-engine ‘Vettes foundered because of a lack of each. The most recent was a casualty of the Great Recession, when GM scrapped every optional project to focus on survival.

Moving the engine behind the cockpit means the end of the roomy hatchback that’s made the Corvette a shockingly practical super car. The space in front of the passenger compartment will likely be the main luggage compartment, with maybe a small storage space behind the engine.

There’s been talk that a mid-engine Corvette would inevitably have a Ferrari-level price tag in the six figures. That’s not true, and not likely. A big part of the Corvette’s appeal has always been that it can run with super cars, but is relatively affordable, especially compared to Italian and German exotics.

The new ‘Vette will cost more, but probably not stratospherically so. I say “probably” because GM’s is expected to keep building the current Corvette Stingray for a while after the mid-engine model goes on sale. That gives it some headroom to launch a six-figure model of the new one without ending the Corvette’s status as an attainable super car.

Until we know for sure, Corvette fans will have to content themselves with the grins on Barra’s face during her spin around Manhattan. She and Juechter appeared to be having exactly as much fun as they should have.

Donald Trump protests are playing at this Oakland, California theater