SportsPulse: The NBA playoffs are here and the real fun begins. NBA insider Jeff Zillgitt gets you ready with everything you need to know ahead of the first round.
USA TODAY

MILWAUKEE — To see a transformation happening in real time, look no further than “The House that Giannis Built.”

Outside the gleaming new Fiserv Forum, an area that for decades had little to offer beyond concrete parking structures and a few historic restaurants is now thriving. There’s an open-air plaza for concerts, holiday markets and weekend festivals, and the hip new restaurants that border it have already made it a popular gathering spot. Condos and apartments are beginning to fill in the neighboring blocks.

Inside the arena, almost everyone is decked out in Milwaukee Bucks gear – no small thing in a city and state where the Green Bay Packers have traditionally sucked up all the air and attention. A handful of people are sporting Khris Middleton and Eric Bledsoe jerseys, along with the occasional Ray Allen throwback.

But the object of almost universal affection is Milwaukee’s most unexpected favorite son and the NBA’s fast-rising star, Giannis Antetokounmpo. Men and women, of all races and ages, proudly wear his jersey — home, road and city. Others are clad in T-shirts with his name, or maybe just his number – 34.

One fan was even wearing Antetokounmpo’s Greek league jersey.

As Antetokounmpo, 24, has emerged as the new face of the NBA, the ideal standard bearer of a league that is at once both local and global, so, too, has he become representative of a new Milwaukee.

“The owners bought this team and reimagined building a neighborhood, a city within a city. That alone, in this city, was monumental,” Peter Feigin, president of the Bucks since October 2014, five months after Wes Edens and Marc Lasry bought the team, told USA TODAY Sports.

“What’s happened in the last two or three years is the Giannis effect is the accelerant on the fire. It’s great. It’s moved up our interest in such a big way — our value, our ability to continue to envision how to grow this brand and the team.”

No one could have envisioned this in 2013, when the Bucks used the 15th pick of the draft on a tall, skinny kid from Athens. Antetokounmpo’s potential was as uncertain as the pronunciation of his last name (ahn-teh-toh-KOOM-boh), and more than a few people wondered what the Bucks were doing.

Or assumed it would be yet another false start for a franchise that, save for an appearance in the Eastern Conference finals in 2001, hadn’t been relevant in 30 years.

But just as Brett Favre and Aaron Rodgers turned out to be ideal matches for Green Bay and the Packers, their singular abilities and star power elevating their small-market team, so too, has Antetokounmpo been for Milwaukee and the Bucks.

“I applaud all these guys that play in big cities and they can handle the media and the attention and all the distractions and keep performing. That’s amazing. For me, I could not do that,” Antetokounmpo told USA TODAY Sports. “Milwaukee is a low-profile city, a quiet city. That’s how I am.

“We fit well together.”

Giannis Antetokounmpo fans line up early before the final regular-season game in hopes of getting a bobblehead of the NBA MVP hopeful. (Photo: Michael Sears, Milwaukee Journal Sentinel)

Antetokounmpo’s backstory is the stuff of legends now. His parents, Charles and Veronica, moved from Nigeria to Athens, where they had four sons: Giannis; his older brother Thanasis; and younger brothers Kostas and Alex. (Francis, their oldest son, was born in and stayed in Nigeria and was raised by his grandparents.)

With little money and no legal standing with the Greek government, the family scraped to get by; Antetokounmpo has told of selling CDs, sunglasses and watches to tourists, the money going to buy groceries and pay utility bills.

Thanasis and Giannis began playing basketball and, as they grew, attracted attention from the Greek league. Eventually, word of the teenager with a greater wingspan (7-foot-3) than he was tall – Antetokounmpo is now listed at 6-foot-11 – and freakish natural ability got the attention of some NBA scouts.

Well, it was more the grainy videos that gave a glimpse at what Antetokounmpo might become, but nevertheless, by the summer of 2013, the Bucks had made “The Greek Freak” a first-round pick.

The 18-year-old immediately charmed his new hometown with his childlike wonder at his new life. He delighted in trying new foods, and was often spotted doing his own grocery shopping or hanging out at the mall. Once, he got a lift to the arena from a couple who’d seen him running – he’d been wiring money back home to Greece and was worried he was going to be late.

But what resonated most in Milwaukee was Antetokounmpo’s work ethic, which is surpassed only by his fierce love for and loyalty to his family.

“I never thought, `I’m going to get drafted when I was 18 by the Milwaukee Bucks, come to the NBA and be the face of the franchise, carrying the team for the fourth time into the playoffs.’ I never imagined that,” Antetokounmpo said. “I just wanted to play basketball and be able to have this job and make decent money to provide for my family. That was all I was thinking.”

It would be several months after he was drafted before his parents and younger brothers were able to join Antetokounmpo in the United States. The delays and endless red tape were a source of both frustration and sadness for Antetokounmpo, with one of his agents recalling in the documentary Finding Giannis that the teenager said he would leave the NBA and return to Greece if his family couldn’t get the necessary paperwork.

While he waited, Antetokounmpo haunted the Bucks’ practice facility. He could almost always be found there late into the evening – or early into the morning – even on nights the Bucks had played.

“His family not being here drained him in some ways, but his approach was still the same,” Middleton, one of the few holdovers on Milwaukee’s roster from Antetokounmpo’s rookie year, told USA TODAY Sports. “He was here to do a job, and he was going to do it to the best of his abilities and not try to worry about too many other things.”

His family has since become a fixture in Milwaukee; his father died unexpectedly in 2017 but his mother is active in the community while youngest brother Alex is a star at Dominican High School. But the comfort that comes with knowing his family has made it has not lessened Antetokounmpo’s desire to get better.

If anything, it’s only fueled it.

Antetokounmpo averaged just 6.8 points and 4.4 rebounds as a rookie, when the Bucks won all of 15 games. Three years later, he’d be named the NBA’s Most Improved Player.

Most importantly to Antetokounmpo, the Bucks are in the playoffs for a third consecutive year, only the second time that’s happened since 1991. As the No. 1 seed, no less, after winning an NBA-best 60 games. They open against the Detroit Pistons on Sunday.

“As my dad said, `Don’t be greedy but never be satisfied.’ That’s how I feel. I want more,” Antetokounmpo said. “I’m not greedy. I understand the journey of the six years, where I was, where I am, where my team was and where the team is right now.

Giannis Antetokounmpo, in his sixth season in Milwaukee, has helped lead the Bucks to the NBA’s best record with 60 wins. (Photo: Bill Streicher, USA TODAY Sports)

Milwaukee’s old arena, the Bradley Center, was a relic – and not just because it had been open since 1988. The sight lines were awful, better suited for hockey than basketball, and the upper deck was so steep it could cause vertigo. There was very little natural light – massive atriums on both sides of the arena were closed off by even more massive walls of concrete – and few family-friendly options in the neighborhood to entice fans to come early for a game or stick around after.

Edens and Lasry made it clear they needed a new arena but, as Feigin said, their vision went well beyond that. They wanted the arena to be a showpiece, not only for that part of downtown, but for the city overall.

Last month, the Democratic National Committee chose Milwaukee over Houston and Miami as host for its 2020 convention.

“The last two decades, there really has been a lot of investment in the neighborhoods. … Downtown was really the last one to the table — or at least the west side of downtown,” said Dan Katt, the co-founder of Good City Brewing, which opened its second location across the plaza from the Fiserv Forum.

“It will close up the remaining sites,” Katt told USA TODAY Sports. “There’s a lot more vibrancy, a lot more people on the streets and certainly a lot more energy than we’re used to seeing.”

While Antetokounmpo wasn’t responsible for luring the Democratic Convention – that was all Lasry – he is a vital part of Milwaukee’s sales pitch.

The NBA, more so than any other American professional league, is a global game, and one that is driven by personalities. As LeBron James ages and longtime stars Dirk Nowitzki and Dwyane Wade retire, no one is better suited to showcase the NBA’s next generation than Antetokounmpo.

Though he doesn’t relish being a celebrity – he was horrified to find paparazzi following him and his girlfriend during the Bucks’ trip to Los Angeles last month – he isn’t sullen about his growing stardom, either. 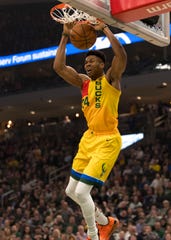 He still goes out in public; he’s a fixture at Alex’s games and can occasionally be seen after Bucks games at restaurants downtown. He is engaging in interviews, with a sly wit and wide, infectious smile. He has already mastered the art of sharing enough of himself so fans feel a connection, yet not so much that it takes away from his primary focus.

And his commercial profile, relatively small until now, is about to expand, with Nike saying last month it will release his first signature shoe during the playoffs.

“The media world has redefined what the center of the world can be, and it can certainly be Milwaukee,” Feigin said. “When the owners took this over, they had the vision of how to build and market in Milwaukee, how to build it in Wisconsin, how to build it in the region, the nation and the country and then the world. Giannis has turned that upside down very quickly.

“Giannis will redefine what the NBA fan group is,” Feigin added, pointing to his youth and international appeal. “And he’ll be doing it all wearing a Milwaukee jersey, which is a nice residual effect.”

Antetokounmpo has signed one extension with the Bucks, which expires after the 2020-21 season. While his future is already the subject of much speculation around the league, he’s not concerned with it. He’s too focused on improving his game and doing whatever he can to be the best player.

Like the city he now calls home, he has transformed himself over these last six years.

“I think I’m pretty far away from my ceiling, my prime. I think I’ve got a lot of things I can improve,” Antetokounmpo said. “I think I can get way better. As long as I believe it, that’s all that matters.”

Don't like surprises? AI predicts who survives 'Games of Thrones'

Which teams are actually trying to win?

Chris Beard leads Texas Tech by feeling like the underdog