Footage from a home camera shows the vehicle of the man who shot and killed 10-year-old Summerbell Brown in her driveway Wednesday night.
Phoenix Police Department, Arizona Republic

PHOENIX – A 10-year-old girl who was shot in her driveway Wednesday night has died from her injuries, Phoenix police said Thursday.

The girl’s father, Dharquintium Brown, said his daughter loved dancing, gymnastics and was on the honor roll at Holdeman Elementary School, where she received As and Bs.

“She was the sweetest person on this planet,” Brown said. “She cared about everybody.”

Brown described Summerbell as very smart, intelligent and bright. “She was a genius,” he said.

Deyon Bowser, a friend and business partner of Brown, who he referred to as “Baltimore” Brown, worked together at iMix Recording Studio in Phoenix.

Bowser described Summerbell as a girl who spoke her mind.

“She was a very outgoing young girl,” Bowser said.

This is the sketch police have released of the man who shot and killed a 10-year-old in her driveway Wednesday, April 3, 2019. (Photo: Phoenix Police Department)

The shooting occurred about 5:45 p.m. Wednesday, according to Phoenix police.

Summerbell and her family were driving home when they noticed a white Ford F-150 4-door pickup truck following them very closely, according to a statement from police.

When the family pulled into their driveway, the truck stopped behind their car and the driver opened fire, Lewis said.

Summerbell and her father were both shot and taken to a hospital in extremely critical condition. Her mother and sister were also in the car but were not injured, Lewis stated.

Brown is recovering from his injuries, but Summerbell died Wednesday, Lewis said.

The person in the white truck drove away after the shooting, Lewis said.

Police on Thursday released a sketch of the man who was in the white truck.

Phoenix police Sgt. Vince Lewis briefs media after a man and his 10-year-old daughter were shot as they pulled into the driveway of their Phoenix home.
Dani Coble, Arizona Republic

Police have not yet determined if the shooting was the result of a road-rage incident or something else.

Witnesses told police they saw the white truck closely following the family’s car as they got to their house, Lewis said.

“It suggests that it could have started on the roadway, but we still are needing more information,” Lewis explained. 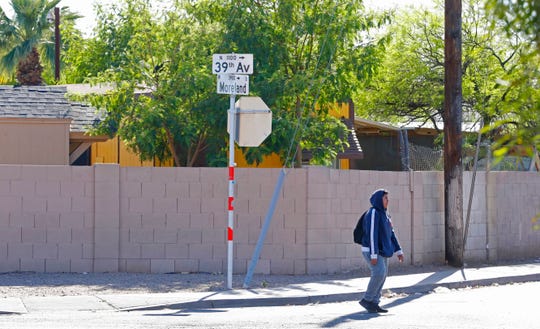 A pedestrian walks past the intersection near where a 10-year-old girl was shot and killed after an unexpected incident possibly involving road rage in Phoenix, Ariz., on April 3, 2019. (Photo: Patrick Breen/The Republic)

Brown’s neighbors want to put together a vigil and also maybe raise money for the family.

“Hopefully bring awareness to the community – the neighborhood – for everybody to get involved,” said Rosanna Castro.

Castro also said they want to let the family know that they are not alone, that neighbors are here for them.

“If we’re all united and stand up, maybe this thing will stop. The shootings will stop,” she said.

Antonio Castro, who is related to Rosanna Castro and has a 10-month-old daughter, said he was heartbroken to see Brown lose his daughter. He saw the father being taken into an ambulance after the shooting.

“I felt that pain,” Castro said. “I got my own daughter. It was heart-breaking.”

“I don’t get how you can’t just blow off the stress,” Castro said. “I don’t get why you need to shoot at all.”

25% now unstable due to global warming