Robert Randolph & the Family Band teamed up with Lukas Nelson for a one-off show at World Cafe Live at the Queen in 2013. Video and editing by Ryan Cormier.

Lukas Nelson is known as the son of 85-year-old country legend Willie Nelson. He’s gained fame as the leader of Bradley Cooper’s band in “A Star Is Born.” But it’s also important to remember he was born in 1988, on Christmas day.

It was several months after hip-hop made a paradigm leap toward its position as today’s most popular music with the release of N.W.A’s “Straight Outta Compton” and Public Enemy’s “It Takes a Nation of Millions to Hold Us Back.” Garth Brooks recorded his first album that year. Madonna reigned as pop’s biggest female artist with an electronic pop sound that is still hugely influential.

But, of all the music released just before Nelson was born, the LP that inspired him most was probably a melodic, guitar-driven, self-titled album by the Traveling Wilburys, featuring George Harrison, Bob Dylan, Tom Petty, Roy Orbison and Jeff Lynne. 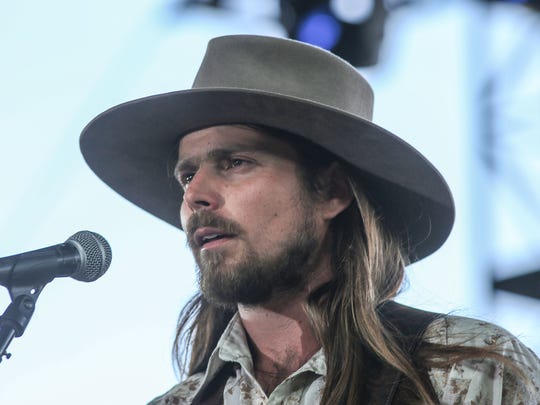 “It’s like a real tribute to Tom Petty and the Wilburys and George Harrison, and songwriter rock ‘n’ roll,” Nelson said in an exclusive interview with the Palm Springs Desert Sun. “Songwriter rock ‘n’ roll is really what I’m doing right now, and I’m trying to make it a colorful mix of types of songs. It’s all in the same sort of soul, country, rock ‘n’ roll genre, but there’s other stuff, too. There’s some dancey-sort of tunes, like Earth, Wind & Fire.”

Promise of the Real has catapulted to fame in the past five years as the backing band for not just Cooper, but Lady Gaga in “A Star Is Born.” It supported them on the Oscar and Grammy Award-winning ballad, “Shallow.” The band also plays backup for Neil Young, and Nelson regularly plays guitar for his father in concert, including at the 2017 Stagecoach festival.

But, Nelson has the career he has today, he says, because of a childhood vision.

“I had a dream when I was a kid that this is what I was going to do,” he said by telephone. “I had a dream I was singing in front of a bunch of people. I was like 5 or 6 years old and I had this whole dream sequence that I still remember as clear as day — this message metaphorically telling me: Just live in my heart, and come from the heart. So, I followed that dream my whole life, and believed in it.” 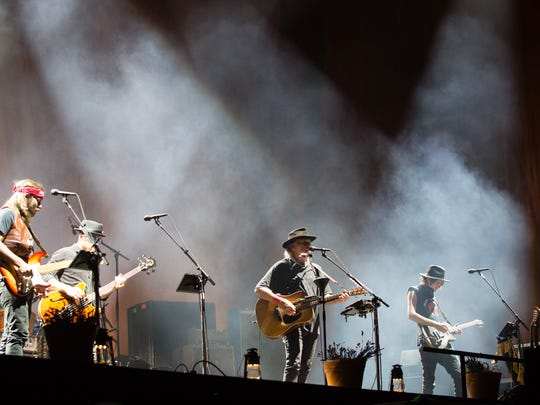 Lukas was raised in Maui, Hawaii, where Willie Nelson has long had a home. But he and his younger brother, Micah, grew up playing the jammy, folk-rock music of Young. Lukas formed Promise of the Real after meeting drummer Anthony LoGerfo at a Young concert while attending Loyola Marymount University in Los Angeles. They named their band after the lyric, “Sooner or later, it all gets real,” from Young’s 1973 song “Walk On.”

Young and Willie Nelson were old friends. They recorded Young’s “Are There Any More Real Cowboys” on Willie’s 1985 duets album, “Half Nelson.” They launched Farm Aid with John Mellencamp that same year. Promise of the Real began playing Farm Aid in 2011, and that inspired Young to make them his back-up band for his 2015 LP, “The Monsanto Years.” Young said he could play anything with Promise of the Real because they had such a vast knowledge of his huge repertoire, going back to Buffalo Springfield in the mid-1960s.

Young and Promise of the Real played Desert Trip in 2016, and Cooper was in the audience. Cooper was so impressed by their performance on a bill with Paul McCartney, he contacted Lukas about helping him with “A Star Is Born.”

That resulted in Lukas earning a string of return engagements to the desert. He played Coachella with Lady Gaga and Stagecoach with Promise of the Real while shooting scenes for “A Star Is Born.” He also played a Stagecoach set with his father and nearly stole the show with an searing guitar solo on Stevie Ray Vaughan’s “Flooding Down in Texas.” He returned to Stagecoach with Promise of the Real last year and toasted his father’s birthday by firing up a joint from his dad’s cannabis company, Willie’s Reserve.

Now Lukas is looking forward to the Wedbush Garden Jam.

“I like to play golf, so I may come a couple days earlier,” he said. “I have a friend who is a member of Indian Wells Country Club, so it might be perfect.”

Not just a backup band

Nelson likes to compare Promise of the Real to Dylan’s backup band of the 1960s, The Band. That Robbie Robertson-led group was already seasoned when they hooked up with Dylan. But, once they started playing together, they pioneered a style of electric-fused folk that was ahead of their audience’s sensibility. Robertson said in a recent video interview crowds booed or stayed silent on songs he thought were well executed. That just inspired them to play with more intensity until audiences finally came around.

That was the beginning of what Nelson calls “songwriter rock ‘n’ roll.”

“Bob Dylan would have been the first (to play it),” he said. “It’s rock ‘n’ roll, but it’s songs that created the movement. The style the Beatles had, they were coming from the British pop realm, but, once they met Bob Dylan, it all changed. Our music is like The Band. We’re like the backing band of Neil Young and Lady Gaga and Bradley Cooper, but we’re also our own band and we have my songs. So, it’s songwriter rock ‘n’ roll. The Band is also songwriter rock ‘n’ roll.”

Nelson prides himself on being able to play an unusually broad range of material. But he says he only knows a fraction of the songs Dylan has memorized. Dylan was an avid record collector who learned hundreds of folk tunes before writing his own songs.

Nelson shares that passion for exercising his brain with such a hardy diet of musical protein, he expects to evolve to a level where he can absorb and regurgitate music faster than the average human being. 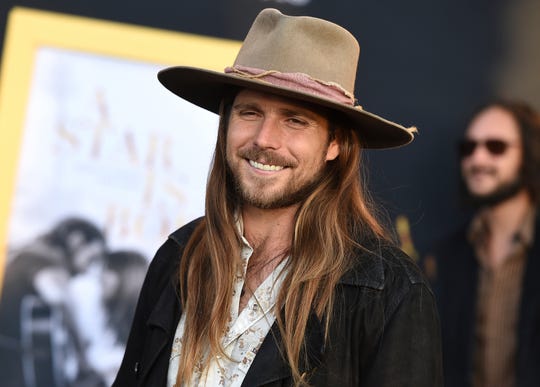 Lukas Nelson arrives at the Los Angeles premiere of “A Star Is Born” on Monday, Sept. 24, 2018, at the Shrine Auditorium. (Photo: Jordan Strauss/Invision/AP)

“It’s a passion that was born of studying my own heroes and doing what they did,” he said. “I read Bob Dylan’s book, and he’d have a thousand songs in his head at once. I don’t have that many songs in my head. I probably have a few hundred songs that I could pull out and play all the way through. Maybe I could get to 500 or 600 songs before I stopped.

“The thing is, it’s not necessarily about how many songs are in your head. It’s about being able to learn a song quickly because you recognize pattern and melody. Mozart could pick up melody so well, if he heard something once, he could repeat it. I’m (working) at getting to that point. I’m getting better at listening to the sound of an engine humming, trying to determine what key that’s in, based on remembering perfect pitch. I’m really trying to hone those skills right now.”

He’s working on developing “enhanced brain abilities,” he said, through meditation and the science of activating brain synapses and neuro-pathways.

“It’s a matter of brain plasticity for me,” he said. “Yes, I meditate, but in my own way. The cutting edge of neuroscience says you can re-wire the automatic thought processes your brain goes through by strengthening certain circuit pathways, and synapses pathways, by thinking specific thoughts. The specific thought itself is not really important. What’s important is the energy behind the thought. For example, rather than saying, ‘I want this’ or ‘I want that,’ it’s meditating or repeating words that are positive, that give you a positive feeling, that make you feel happy. Then, all the things you want in life are more clear because your goal is to be happy.

“This is just science catching up with the wisdom of the Eastern religions. They really had it going on, at least in terms of inner growth and recognizing the importance of the inner world developing before the outer world.”

Nelson is playing such diverse cover songs on this Promise of the Real tour as “Breakdown” by Petty, “Hey Baby (New Rising Sun)” by Hendrix, and “Diamonds on the Soles of Her Shoes” by Paul Simon.” He’s also playing “Shallow” and some of the originals he played last year at Stagecoach, including his most streamed song, “Find Yourself,” and “Forget About Georgia,” about how playing “Georgia On My Mind” every night on tour with his dad made it impossible to forget about an ex-girlfriend named Georgia.

He could also reprise his cover of Vaughan’s “Flooding Down in Texas.”

“My dad obviously is my world; I definitely consider him to be the major spark not only with music, but with life for me,” Nelson said. “But Hendrix was a huge influence on me. Hendrix and Stevie Ray Vaughan were the ones that sort of made me love music in my own way, and just gave me some other music to fall in love with, other than what Dad was doing.” 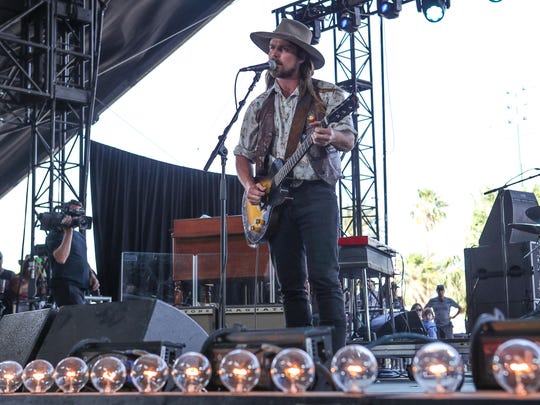 The irony is, Nelson’s favorite genre of songwriter rock ‘n’ roll could be as startling to young audiences today as Dylan and The Band’s music was to folk-minded crowds in the 1960s. The 1975 has been called possibly the best rock band on this year’s Coachella lineup. But Robert Christgau, the 76-year-old dean of rock critics, has said that keyboard-driven band doesn’t rock.

Nelson sees how rock has evolved, but says playing with authenticity is more important than playing technology that is current.

“The difference between then and now, in terms of The Band and older folk (is), they (‘60s fans) didn’t understand the cultural significance of rock ‘n’ roll,” Nelson said. “In a lot of ways, I do understand the cultural significance of electronic music. Electricity is a huge part of what I do, whether it’s on a computer or channeling through a amp. But, it worked for Dylan in the long run because it ultimately was who he was.

“If you’re trying to be somebody you’re not in a world where the Internet and these algorithms are all designed to expose exactly what you are, you won’t make it in the long run. You might have flashes of fame and make a lot of money, but, if your goal is to be a career artist for a really long time, … it really is about the song. If you don’t have a good song, you might get by on image. You might get by on sheer talent at playing your instrument. But, without a good song to tie it all together, it’s not going to work.

“I’ve probably done 2,500 shows in the last 10 years and absolutely there has never been silence.”

Our guide to surviving the three-hour movie

Roseanne Barr goes on odd rant about use of homophobic slur