Samuel L. Jackson sat down with Brie Larson – the latest actor to join the Marvel Cinematic Universe – to warn her about how her life would change after starring in “Captain Marvel.” (Feb. 22)
AP

Actor Samuel L. Jackson is not a fan of U.S. Senate Majority Leader Mitch McConnell and wasn’t afraid to slam the Kentucky Republican in a profanity-laced interview this week.

In a wide-ranging discussion with Esquire, the 70-year-old star of the movie “Pulp Fiction” and Marvel franchise stalwart was asked if growing up during racial segregation made him angry.

Jackson — who is the highest-grossing actor in history with 120 films that have raked in $13.3 billion worldwide — said it didn’t anger him while growing up in Chattanooga, Tennessee.

“I’m angrier now about it than I was then, just because I see these guys and I know these are the same guys: (President Donald) Trump and all those assholes, Mitch McConnell,” Jackson said. “But they’re the same (expletive) guys. And when I hear their voices, I hear the same voices.”

McConnell’s office did not immediately respond Wednesday evening to a request for comment about Jackson’s remarks. 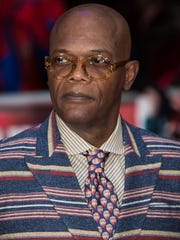 Jackson went further during his interview, saying it was always clear to him what people like Trump and McConnell thought about racial issues.

“There was no doubt about where they stood, that you were never going to be their equal and, if possible, they were going to make sure you never had as much shit as they had,” Jackson said. “And they were worried about the chasteness of their women, and miscegenation, and not having enough of them, there being more of us than there are of them.”

McConnell’s defenders often point to his remarks against racial slurs and his praise of civil rights legislation during the 1960s when he faces charges of racism.

McConnell chastised Everett Corley, a Kentucky Republican who ran for the state legislature last year and who criticized McConnell’s marriage to U.S. Transportation Secretary Elaine Chao, who is Asian, during a 2014 appearance on a white nationalist YouTube show.

“This racist behavior is completely despicable,” McConnell told the Louisville Courier Journal at the time. “Such backwards views and hateful rhetoric must be given no corner in the Republican Party or anywhere in America.”

When U.S. Rep. Steve King, R-Iowa, was scorned nationally for questioning why white nationalism was offensive, McConnell said the congressman “should find another line of work.”

But McConnell has been criticized more in recent years for not speaking out against Trump, who has been accused of making several controversial remarks around race.

Wildlife World Zoo 'did everything right' after attack, official says

Trump who? Alec Baldwin tweets it ‘would be so easy’ to win election