After a surprise goodbye, some fans of “The Bachelor” are already hoping the recently departed woman will become the new leading lady.
USA TODAY

This is it, “Bachelor” fans. The final moment(s) we’ve been waiting for: Do Colton and Cassie end up together after all? Can we finally stop talking about Colton’s virginity? WHO is the next “Bachelorette”?

We pick up where Monday night’s live finale left us hanging, with Colton arriving and knocking on Cassie’s hotel room door … and, yes, she answers! Looks like her packing up her suitcase and leaving was nothing but editing trickery. Rude.

The two step outside to have another conversation. We hear Colton say  in an aside: “I don’t know if she can be in love with me … but I hope she’s not at peace with her decision, because I’m not.” Neither are we, buddy, we’re watching this.

Part I of the finale, in case you missed: Colton dumps Tayshia and Hannah G. to fight for Cassie

He tells her that he knew he wanted to talk to her again, but wanted to make sure he ended things with Tayshia and Hannah G. first. Cassie is shocked, which, I mean, so are we. “I’m not sitting here asking for marriage at the end of this,” he says. “I’m sitting here asking for a second chance.” He wants to take their relationship day by day to figure it out. Cassie, as she’s wont to be, is more ambivalent. She knows he’s willing to give up things for her and is concerned he’s going to resent her. (Again, viable concerns! Mature!)

But Colton won’t quit. He reiterates that he gave up everything so they could talk again. She beams. They kiss. Yes, we gasped and clutched our hair and originally wrote this sentence in all caps.

And then Colton says what every hopeless romantic across the country wants to hear every damn day of their lives: “You know how much I didn’t want to watch you walk away? I hopped an 8-foot fence and ran away.” We are not crying, you are crying!!!

Colton invites Cassie to go to Spain, where his family is waiting for him … though they have no clue about our bachelor’s latest shenanigans. 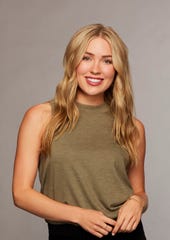 We pick up where Monday night’s finale left us hanging, with Colton arriving and knocking on Cassie’s hotel room door … and, yes, she answers! (Photo: Craig Sjodin, ABC)

What happens in Spain stays in Spain (family edition)

Welcome to Mallorca, Spain, Bachelor Nation. When Colton sees his family he becomes the ultimate jokester: “I am no longer a virgin.” Say WHAT? But it turns out he’s just kidding, which, ugh, fine, let’s move on.

He gives them a brief recap on what went down and who they’re going to meet. His father, Scott, asks him if Cassie’s in love with him, and he says at this point, no (which doesn’t exactly give his relatives confidence in the relationship).

Once everyone gets a chance to (awkwardly) meet, Colton’s mother, Donna, pulls him aside. The fact Cassie left him scares her. Like any caring parent, she doesn’t want Colton to get set up for another heartbreak. Scott harbors similar concerns and tears up. So much crying!

Cassie explains to Donna that she and Colton are a little bit on different pages − exactly what every parent wants to hear about their lovesick child.

Colton says in an aside: “I am literally giving this woman my heart. She is holding it. And it’s up to her what she does with it.” Let’s hope she doesn’t drop it.

Oh, the memories: 5 crazy things that happened on ‘The Women Tell All’

What happens in Spain stays in Spain (date edition)

Cassie and Colton spend the next day together, where her plan is to figure out exactly where she stands with him. Because you can definitely figure all that out in a day!

The two set off on a picnic lunch together … but there’s a catch. They have to rappel down the side of a mountain to get to it! You know that Tayshia is screaming inside right now, since she was the one who got to do all the stunts with him before.

We’re also screaming inside, because this whole leaping-into-love metaphor is way too heavy-handed.

Next we get some intel on what’s holding Cassie back: She dated someone in college who got pretty controlling, and she thinks that’s why she’s so hesitant to be in a committed relationship. She doesn’t want to lose herself. (Again, Cassie, this is fantastic and you should be so proud of yourself.)

Colton, for his part, tries to assuage her concerns − and, bless that man, it works! More than ever she feels how much Colton loves her and she thinks she’s starting to accept it. And so are we.

At dinner, she says that he’s taught her a lot about what a good relationship looks like … and guess what? She might get to teach him a thing or two: The fantasy suite card arrived and they’re going to use it! Colton breaks the fourth wall (or whatever that is when he’s talking to the production team) and tells the crew he loves them but that they need to get out. (!) The two make sure to get de-microphoned (good call, Cassie), and the door shuts.

Live in the studio, eliminated contestant Demi quips: “I hope that Cassie jumps on Colton like a Portuguese fence.” Well then.

Back to the night in question: Colton feels like a new man. (OK …) “What happened last night was great for our relationship,” Colton says in an aside. He’s very happy and says “you could use your imagination.” Bleh.

With breakfast in bed in front of them − and a cheeky admission from Cassie that her calf still hurts − she asks Colton “What’s next?” He says: “Give it our best shot. Together.”

What happened after that between Cassie and Colton

Colton and Cassie join Chris Harrison in front of the live studio audience looking … happy! They are in love and enjoying dating right now. But … are they getting engaged? “It’s definitely something we’ve talked about,” Cassie says. Hmmmmmm.

Cassie says (via voiceover) that since Spain, he’s become her best friend. She doesn’t regret anything that happened. Apparently she didn’t tell Colton how she was feeling, but she wrote down her feelings a lot. Ah, yes, the power of the written word, friends!

“I’m so in love with you and I never want you to ever doubt that,” she tells Colton in a clip from time they spent together post-Spain.

As for more live antics: Colton officially gives Cassie the final rose and (not shockingly) still plays coy on whether he lost his virginity. We also get a live performance from “legendary band” Air Supply, because, uh, sure. Only this show could get away with this finale.

And the next “Bachelorette” is …

Hannah B(rown)! (or should we say, “Hannah Beast,” champion of toasts, “Roll Tide,” etc.) She made it pretty far during this season, but Colton dumped her shortly after he introduced her to his family.

In a segment that practically made us forget this past season’s drama, the new star got to meet several of her contestants (two of whom are named Luke) during Tuesday night’s finale − including one who raps (Cam).

Let’s hope she says “same” as many times during her season as she did tonight (which was a lot).

In an unprecedented move, Hannah hands out her first rose of the season before it even starts. It goes to …Cam! The new season starts May 13.

Away we go, folks.

Sophie Turner and Joe Jonas will have a second wedding ceremony