Gwyneth Paltrow makes a cameo on ‘SNL’ and Pete Davidson talks about his relationship with Kate Beckinsale.
USA TODAY

The Diocese of Brooklyn is not laughing at Pete Davidson’s latest comparison on “Saturday Night Live.”

During the show’s “Weekend Update” segment, the comedian likened supporters of the Catholic Church, which has seen a sex-abuse scandal encompassing thousands of priests, to fans of R. Kelly, who is facing 10 counts of aggravated criminal sexual abuse.

“If you support the Catholic Church, isn’t that, like, the same thing as being a R. Kelly fan? I don’t really see a difference, only, like, one’s music is significantly better,” Davidson said to mixed reactions from the crowd. “Look, I’m not saying it’s an easy decision, I’m just saying, you don’t know how good someone’s music is until you find out they’re a pedophile.” 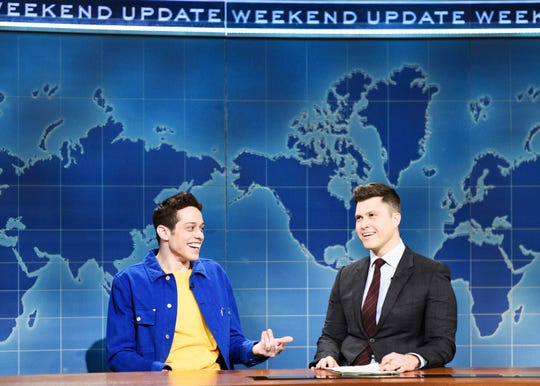 Pete Davidson also appeared on “Weekend Update” with Colin Jost to address rumors about him dating actress Kate Beckinsale and the age difference between them. “It doesn’t really bother us,” he said. “But then again, I’m new to this, so if you have questions about relationships with a big age difference, just ask Leonardo DiCaprio, Jason Statham, Michael Douglas, Richard Gere …” and on and on, including three references to Larry King. (Photo: Will Heath, NBC)

In a statement posted to its website, the diocese demanded a public apology from “SNL” and NBC for the “disgraceful and offensive skit.”

“Apparently, the only acceptable bias these days is against the Catholic Church,” leaders of the Brooklyn diocese said in a statement. “The faithful of our Church are disgusted by the harassment by those in news and entertainment, and this sketch offends millions. The mockery of this difficult time in the Church’s history serves no purpose.”

The statement continued: “The clergy sex abuse crisis is shameful, and no one should ever get a laugh at the expense of the victims who have suffered irreparably. The Diocese of Brooklyn strives every day to ensure that sexual abuse by clergy never happens again.”

The diocese said it has “instituted widespread changes” to prevent abuse, adding that it’s “likely that no other institution has done more than the Catholic Church to combat and prevent sexual abuse.”

So far, “SNL” producers and NBC have not responded to the diocese.

In the skit, Davidson called Kelly a “monster,” before sharing his take on the similarities between him and the church.

Davidson added, “And the reason everyone’s so upset is because R. Kelly and Michael Jackson made great music. If I found out Macklemore did some weird stuff, I’d be happy to free up the space on my iPhone.”

Davidson then suggested how people should handle whether to continue listening to Kelly. “The rule should be, if you want to listen to their music, you just have to admit they’re bad people.” he said.

Rapper to be remembered by thousands in L.A.