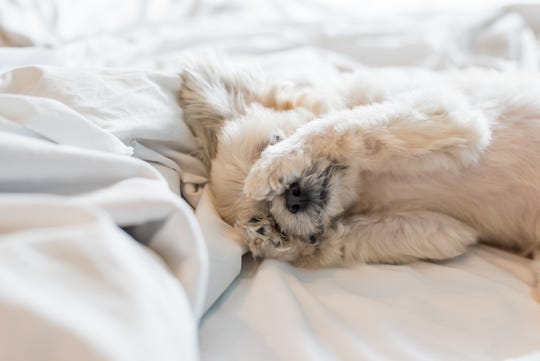 After most Americans lost an hour of sleep over the weekend, a day to celebrate naps seems more than welcome.

Clocks were set ahead Sunday morning to observe daylight saving time (not daylight savings time) in all states apart from Arizona and Hawaii, states that don’t observe the time change first enacted by the federal government in 1918 as a way to conserve coal.

While clocks jumped ahead, our bodies likely haven’t adjusted — and they probably won’t for about five to seven days, according to sleep experts. Hence, #NationalNappingDay. The holiday is about as official as Pancake Day. According to Boston University, a professor and his wife began observing the day to show the health benefits of napping.

“We chose this particular Monday because Americans are more ‘nap-ready’ than usual after losing an hour of sleep to daylight savings time,” professor William Anthony said in a statement.

People who regularly don’t get enough sleep are usually most affected by the lost hour, said Timothy Morgenthaler, Mayo Clinic’s co-director of the Center for Sleep Medicine. People who are sleep-deprived might struggle with memory, learning, social interactions and overall cognitive performance.

Some advocate that napping could help. Short naps (10 to 30 minutes) in the afternoon can be a great way to recharge, Lois Krahn, a psychiatrist and a sleep specialist at Mayo Clinic Arizona says.

We know the first weekday after springing forward can be rough. Luckily, it’s #NationalNappingDay so you don’t have to feel too bad about taking a little midday snooze. pic.twitter.com/JIyxe0Kkci

But, don’t get caught napping for too long, as Krahn says napping too much could disrupt nighttime sleep. Also, for those waiting until the weekend to catch up on lost sleep — beware. A recent study out of Current Biology suggests people who use weekends to sleep in could gain more weight compared to those who don’t.

More: Using weekends to catch up on sleep is not healthy, study says