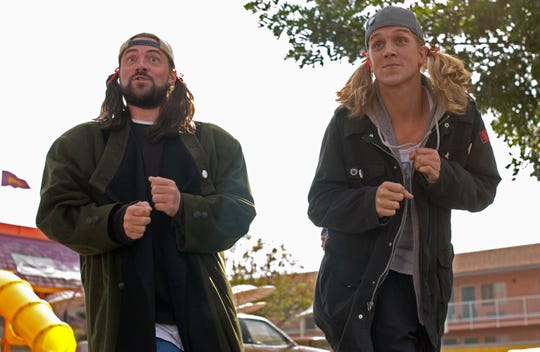 Snootchie bootchies, Kevin Smith fans: A “Jay and Silent Bob Reboot” is in the works.

Smith has been releasing photos and videos from behind-the-scenes, including posting a video diary on YouTube.

More:Everything Kevin Smith has coming out this year

Here’s what we know about the upcoming film so far.

No release date has been, well, released yet.

Production on the film began Feb. 25, exactly one year after Smith had a near-fatal heart attack.

There are not many details on the plot yet, either, though Smith has said it is “literally the same (expletive) movie all over again.”

According to a description on IMDB.com, Jay and Silent Bob return to Hollywood to stop a “Bluntman and Chronic” reboot from being made.

Some familiar names have been announced so far as starring in or having a cameo in the sequel.

Smith posted on Instagram about filming a scene with rappers Method Man and Redman.

Other celebs Smith has featured as appearing in the movie are: Craig Robinson, Joe Manganiello, Justin Long, Jordan Monsanto and Frankie Shaw.

Fans also can expect to see Smith movie regulars Brian O’Halloran and Jason Lee make their return in the reboot.

More: Why 1994 was the best year ever for movies

There was also an open casting call for scenes filming this month in New Orleans.

We will keep you updated as we get more information!

Do you have a favorite Kevin Smith movie? Let me know. You can reach me on Twitter @fdwellington.

‘The Office’ could leave Netflix and fans are already freaking out

Roger Charlery, ‘Ranking Roger’ in General Public is dead at 56