Jason Priestley said he is in “so much pain” after losing Luke Perry to a stroke. The two played best friends on “Beverly Hills 90210.”
USA TODAY

The mother of three, 46, had some choice words for social media trolls who criticized her for not posting a tribute to Perry after Garth shared an Instagram picture of her daughters in honor of International Women’s Day on Friday.

“These women,” Garth captioned a smiling photo of her daughters with ex-husband Peter Facinelli: Luca, 21, Lola, 16, and Fiona, 12.

It marked her first social media post since Perry died Monday at age 52 after suffering a stroke, and fans were quick to call out her lack of public grief. 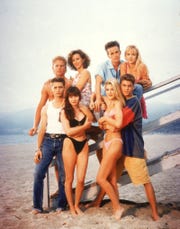 “I love u @jenniegarth but y haven’t u put anything about Luke Perry? My heart is torn & I didn’t even know him,” one user commented, while another added: “Guess u are Kelly (Taylor) in real life. Couldn’t even take a minute to write a tribute about Luke. Wow. Self centered much ? No wonder u can’t keep a husband or a man.”

Garth clapped back, noting that Perry was not interested in social media.

“Hey everyone … I chose to post a pic of my girls today. Because they are my life. Because today is a day to celebrate all women,” Garth responded in the comments. “It took a lot for me to want to celebrate anything. I thought about it and I know that’s the way my dear friend would have wanted it.” 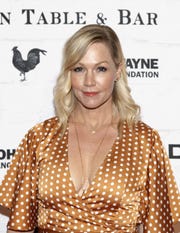 She wrote: “His kids were his life. And anyone who knew him knows that and knows he didn’t give a (expletive) about social media. So please don’t assume or judge or make rude comments. That’s really uncool. Sincerely, Jennie.”

“I want to express my gratitude to everyone for the outpouring of love and support,” Bauer said in a statement to People on Saturday. “The countless, heartwarming stories of Luke’s generosity and kindness have been a great source of solace during this difficult time.”

Bauer said the past “11½ years with Luke were the happiest years of my life,” adding she’s “grateful to have had that time with him.”

“I also want to thank his children, family, and friends for their love and support,” Bauer said. “We have found comfort in one another and in the knowledge that our lives were touched by an extraordinary man. He will be dearly missed.”

Perry’s representative, Arnold Robinson, told USA TODAY that the actor was surrounded by friends and family before his death.

Last week, Perry was hospitalized Feb. 27 after paramedics responded to a 911 call about a possible stroke at his Sherman Oaks, California, residence.

Turbulence injures at least 29 passengers during flight to JFK Airport

Turbulence injures at least 29 passengers during flight to JFK Airport

5 crazy things that happened on ‘The Women Tell All’