This is a time to celebrate college basketball and the way the sport has grown in the Southeastern Conference, which upped its emphasis three years ago and is already seeing dividends.

This is one of the best conferences in the nation, up there with the ACC and Big Ten. But no conference will have a sideshow to match this one when the SEC tournament convenes next week in Nashville’s Bridgestone Arena.

LSU would currently be the No. 1 seed in that tournament, and the Tigers can clinch the top seed and at least a share of the regular-season championship by beating Vanderbilt at home Saturday. But LSU will have to do it without its head coach, Will Wade.

Wade, 36, is one of the game’s hot young coaches. Also, its most embattled — since a Yahoo Sports report Thursday detailed an FBI transcript of wiretapped calls from 2017 in which Wade discussed a “strong-(expletive) offer” for a prospect he was recruiting.

On Friday, to LSU’s credit, Wade became a suspended head coach. A joint statement from president F. King Alexander and athletic director Joe Alleva said Wade had been suspended indefinitely “until such time as we can ensure full compliance with the NCAA, as well as institutional policies and standards.”

LSU made the statement that had to be made. There was no other way.

OPINION: LSU should skip the NCAA tournament and fire Will Wade

Wade’s conversations with basketball middleman Christian Dawkins, then an Adidas consultant, are damning unless you’re draped in purple, gold and excessive denial. He appears to be talking about Javonte Smart, then a coveted prospect and now an LSU freshman guard.

ESPN, citing court records, reported Dawkins had at least three calls with a number belonging to Wade between June 19 and June 30, 2017. Smart announced his LSU commitment on June 30, 2017. 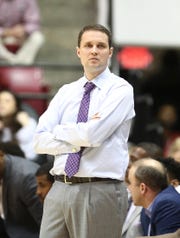 The “he” in question would be an unidentified third party in the recruitment.

Wade should be fired next. And if you want to say he’s far from the only coach involved in this stuff, fine, I agree, but he’s the one caught on tape here. If you want to say the system is broken and the players should be free to profit from their talents and not have to go under the table, fine, I agree, but these are the NCAA rules that exist today.

If you want to try to make something else of these conversations or claim the FBI wouldn’t do this to a Duke or North Carolina or Kentucky, just stick your head back in the sand.

Nashville will be wild next week as this LSU team tries to win a championship without its head coach — assistant coach Tony Benford has taken over on an interim basis. That’s tough for these players, and media availability won’t be especially fun for them. But at least LSU did something about Wade. Otherwise, an event that should be a celebration would have been a sham.