These mistakes could cause qualified candidates to turn down job offers.
The Motley Fool

That’s the fewest job gains since September 2017, when major hurricanes curtailed employment. Economists had expected about 181,000 jobs to be added in February.

The unemployment rate fell to 3.8 percent from 4 percent, the Labor Department said Friday. The partial government shutdown boosted the jobless rate in January as many federal government employees told Labor survey takers they were unemployed or on temporary leave, and an offsetting drop was expected as those workers returned.

Economists were looking for a pullback in payroll growth last month after outsize gains in January that were inflated by unusually mild weather. Meanwhile, above-average snowfall when Labor conducted its survey in mid-February was set to reduce total employment by at least 40,000, Goldman Sachs said. 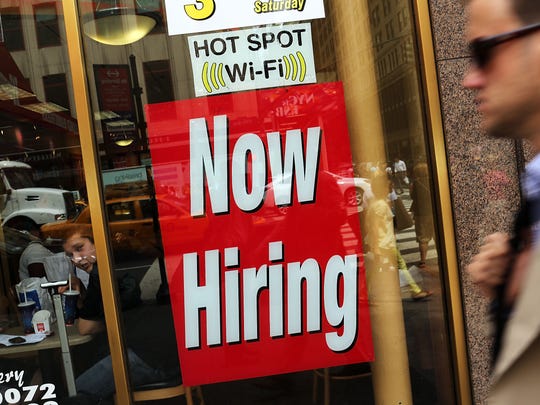 A “now hiring” sign is viewed in the window of a business. (Photo: Spencer Platt, Getty Images)

The U.S. economy is expected to slow this year after federal tax cuts and spending increases juiced growth in 2018. The economy grew 2.9 percent last year, the second strongest showing of the nearly 10-year-old expansion, and monthly job growth averaged a robust 223,000.

But those stimulus effects are expected to fade by late this year. At the same time, the low unemployment rate is making it harder for employers to find qualified workers. Economists estimate monthly job gains will average about 170,000 in 2019.

“It’s clear that the labor market is losing momentum,” economist Michael Pearce of Capital Economics wrote in a note to clients.

More: Samsung’s Galaxy S10 is here. But can it usher in a new era of wow for smartphone buyers?

More: Stocks: The record bull market is 10 years old. Is it about to flame out or surge higher?

The global economy, particularly China and Europe, also has softened, crimping manufacturing production and hiring lately. President Donald Trump’s trade war with China has dampened the confidence of many businesses despite recent signs of progress in talks between the two countries.

Pay increases have accelerated as employers bid up to draw a shrinking pool of available workers amid a historically low unemployment rate. Average wage growth is expected to reach 3.5 percent by the end of the year, an advance that could spark faster inflation and prod the Federal Reserve to raise interest rates more rapidly. For now, Fed officials recently said they will be patient on rate hikes as they assess the fallout from the slowing global economy and volatile financial markets.

Industries that are hiring

Professional and business services led the meager job gains with 42,000. Healthcare added 22,000 jobs; and manufacturing, which is grappling with the slower overseas economy and trade war, added just 4,000. Employment fell by 31,000 in construction and 6,000 in retail and was unchanged in leisure and hospitality – signs that bad weather suppressed payrolls last month.

A wider measure of unemployment – that includes discouraged workers who have given up job searches and part-time workers who prefer full-time jobs, as well as the unemployed – tumbled from 8.1 percent to 7.3 percent, lowest since April 2001.

That’s good news because it means rising wages and employers’ struggles to find workers are pulling Americans on the margins back into the labor force. But part of the decline can be chalked up to a natural retreat after the rate jumped from 7.6 percent in January as government workers idled by the shutdown took part-time jobs, says economist Ian Shepherdson of Pantheon Macroeconomics.

Last month’s measly job growth can largely be chalked up to snowstorms and an offsetting rebound after balmy weather artificially pumped up January’s gains. Payroll gains over the past three months have averaged an “entirely respectable” 186,000, Shepherdson notes.

Still, the slowdown was much worse than expected and likely reflects an economy that’s downshifting some after government stimulus spurred faster growth last year, as well as a low unemployment rate that’s causing more worker shortages.

Despite the pickup in pay increases, the report bolsters the Fed’s plan to remain patient and see how the economy evolves before raising interest rates again, according to a report by Bank of America Merrill Lynch.

The share of American adults working or looking for jobs stayed at 63.2 percent, highest since September 2013, as more Americans on the sidelines, including discouraged workers and retirees, streamed into a favorable labor market offering more jobs and higher wages. That shows the January rise wasn’t a one-month blip.

Eventually, the labor force participation rate is expected to resume its longer-term decline as millions of baby boomers retire.

You could work for Amazon in your PJs.
USA TODAY

ACC has three No. 1 seeds