SportsPulse: Trysta Krick explains why we should be thanking Robert Kraft following his alleged involvement in the solicitation of prostitution.
USA TODAY

Despite a court notice issued requiring Robert Kraft to appear in person at an arraignment on charges he solicited prostitution at a Florida spa tied to a human-trafficking ring, his attorney said the New England Patriots owner will not be there.

The hearing was set for 9 a.m. March 28 in Palm Beach Gardens.

“This is a routine procedural hearing that the Court sets based on its schedule,” West Palm Beach attorney Jack Goldberger said in an email.

Goldberger called the language in the hearing notice “boilerplate.”

“In fact, the lawyer appears for the defendant in a misdemeanor case. The defendant does not appear,” Goldberger added. 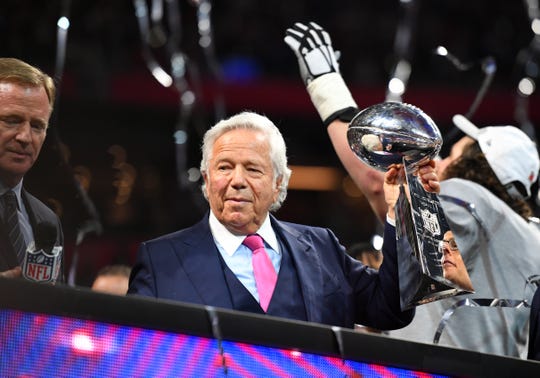 Kraft was one of nearly 300 men accused of paying for sexual services at 10 spas across Florida raided Feb. 19. Investigators said women working in those spas were victims of human trafficking being held in sex slavery.

Kraft is charged with paying women at Orchids of Asia Day Spa in Jupiter twice during the NFL playoffs, including the morning the Patriots won the AFC Championship game in Kansas City.

Jupiter police said the acts were captured on video surveillance.

Kraft pleaded not guilty in both cases and asked for a non-jury trial.

“We categorically deny that Mr. Kraft engaged in any illegal activity,” a spokesman for Kraft said in a statement. “Because it is a judicial matter, we will not be commenting further.”

The NFL has said it will handle “this allegation in the same way we would handle any other issue” and would “take appropriate action as warranted based on the facts.”

The charges Kraft faces are both first-degree misdemeanors, punishable by up to a year in jail.

Florida statutes require a minimum of 10 days in jail for any prositution solicitiation offenses after the first violation. A conviction also carries the possibility of a $5,000 fine, 100 hours of community service and participation in educational programs.

“I can assure you that our office treats everyone the same,” 15th Circuit State Attorney Dave Aronberg said in a news conference Feb. 26, the same day Kraft’s attorney was served with a summons in the case.

“Nobody gets any special justice in Palm Beach County.”

How long should I keep my tax returns?