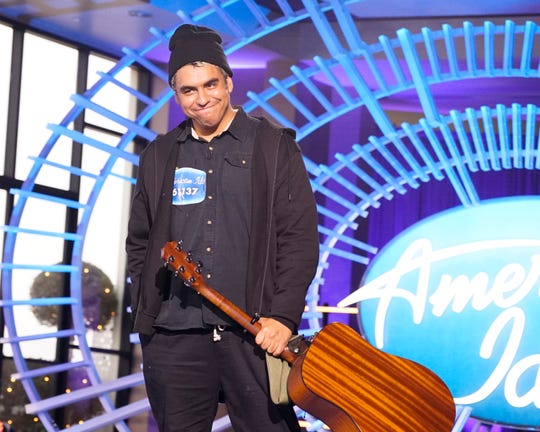 “American Idol” contestant Alejandro Aranda gave one of the best auditions ever, according to the judges. (Photo: Kelsey McNeal, ABC)

We’re sorry to report this, “American Idol” hopefuls, but the competition may have just been won.

Judge Katy Perry has already declared singer-guitarist Alejandro Aranda the next superstar, after the 24-year-old Pomona, California, native floored her and fellow judges Lionel Richie and Luke Bryan with his dexterous guitar skills and heavenly pipes during Wednesday’s episode, only the second of the show’s 17th season.

Aranda was mellow and unassuming throughout his audition. He said he started playing music just four years ago, and has been couch-surfing and busking on the street ever since, while working as a dishwasher to pay the bills.

He considers Bach, Chopin and Nine Inch Nails’ Trent Reznor his biggest musical influences, and is the first to admit that his voice isn’t the strongest in the “Idol” competition.

But the judges insisted otherwise. Following his performance of an original acoustic song, “Out Loud,” Richie jumped to his feet and gave the beanie-clad troubadour a hug.

“That was the greatest,” Richie said, imploring Aranda to perform another unnamed tune on piano. “There is nothing like you, my friend.”

“I feel like I’m in the presence of greatness,” Bryan added. “I’ve never seen somebody do what you just did on a guitar. I am so glad you are here – you just rocked my world.”

“American Idol” auditions continue Sunday (8 EST/PST), with three more episodes due before the show moves to Hollywood Week on March 24.

Pancreatic cancer isn't an easy fight. Can he win?

How Susan Boyle became an unlikely star 10 years ago

Why diversity in historical dramas matters