SportsPulse: Jeff Zillgitt and Martin Rogers give their take on which legendary franchise is in worse shape at the moment.
USA TODAY

If the NBA playoffs ended up having fewer  than the customary 16 teams, that would be fine. How would it work, you ask? The answer: it doesn’t really matter. Give a couple of first-round byes. Have a play-in game or two. Whatever.

Just get rid of the losers.

If you don’t have a winning record, there is no earthly reason why you should be in the playoffs. This won’t happen, but if commissioner Adam Silver trimmed the field by kicking out any playoff qualifier operating at a sub-.500 level, it would be a positive thing.

While having a postseason is an integral part of all major American sports, and the opportunity to give more teams something to shoot for late in the schedule is a worthy concept, there is no place for any team that gets beaten more than half the time.

Yet that’s what might happen this season. In the top-heavy Eastern Conference, it is almost certain that at least one playoff-bound team will go in with a record of sub-.500. It’s quite feasible that two teams could be in that position, and somewhat plausible that three clubs could still be in contention despite having tasted the sour sting of defeat all too often.

The NBA has taken solid measures aimed at curtailing rewards for failure by altering the draft lottery and making it harder for franchises to prosper by going into tank mode. Now it is time for the league office to set its sights on not allowing teams that are mediocre at best to get into what is supposed to be the showcase of the elite.

LAKERS IN DOGG HOUSE:Snoop calls for Luke Walton’s firing and offers his box seats for $5

EXCLUSIVE CONTENT:Get news in your inbox first with Click & Roll

Since 1997, 11 teams have qualified for the playoffs with a losing record. Not one of them has won a series. The Atlanta Hawks have taken their series to seven games on both occasions they came in below .500, but apart from those quirky instances, losing teams are 4-35 in the first round.

The 1996-97 season also marks the last time a Western Conference team (the Los Angeles Clippers) entered playoff time in such a spot, which says everything you need to know about how long the NBA’s geographical disparity has been going on. 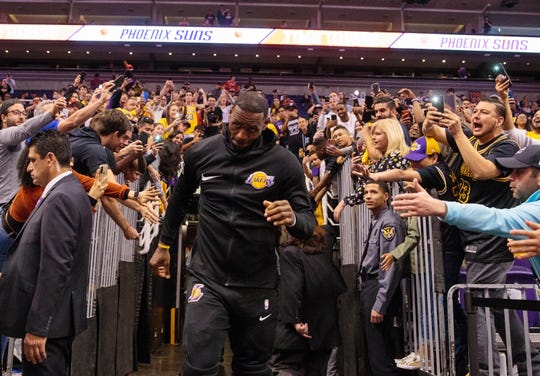 Fans react as the Lakers’ LeBron James runs past them at Talking Stick Resort Arena before a game against the Suns. (Photo: Mark J. Rebilas, USA TODAY Sports)

Last season, the worst playoff team was the 43-39 Washington Wizards. The year before, the Chicago Bulls and Portland Trail Blazers squeezed in with 41-41 marks.

The problem could partially be fixed by taking the top 16 teams based on record and moving them through to the playoffs, regardless of how the conference standings looked in April.

And there has been the suggestion that if the Los Angeles Lakers miss the playoffs, which looks increasingly likely despite the arrival of LeBron James, at the expense of a team from the East that is say, 39-43, it would spark swift change.

But if shouldn’t take the absence of a superstar to prompt such a shift. In any case, at the end of Saturday night’s games there were just 14 teams at .500 or better, and the disjointedly floundering Lakers were three wins shy of that mark.

This doesn’t mean that teams that aren’t habitual winners deserve our scorn. There is nothing wrong with being something like 36-46, a solid record, especially for a team that might be rebuilding or working toward better times. But it is not something that should be rewarded with a cherished spot in the playoffs.

The NBA’s postseason is supposed to be its most exciting time, when the best of the best go up against each other with everything to play for. Permitting those unable to even reach parity is simply not in keeping with so many of the other things the league does to encourage excellence.

Losing is part of the game and no one, not even the dominant Golden State Warriors or Michael Jordan’s Chicago Bulls, can win always. But if a team can’t win more frequently than it gets beaten, there should be no golden ticket handed out to make it feel marginally better.

Musselman to be replaced by Alford as Nevada basketball coach