INDIANAPOLIS – It’s not quite like breaking the color barrier, but Andy Isabella is a walking distinction that just might make some people think twice. The University of Massachusetts receiver is believed to be, well, the first white player to post the fastest 40-yard time at the NFL scouting combine.

Isabella blazed to a 4.31-second mark on Saturday, which matched Ohio State receiver Paris Campbell at the top of the chart through Sunday’s combine performances. Stunned?

Isabella isn’t. He won the Ohio state championship in the 100-meter dash while competing for Mayfield High and has become used to turning heads because he might not fit the prototype – or stereotype — given that sprint titles and combine footraces are often dominated by African-Americans.

That made me curious to get Isabella’s take on his rep as a blazer. 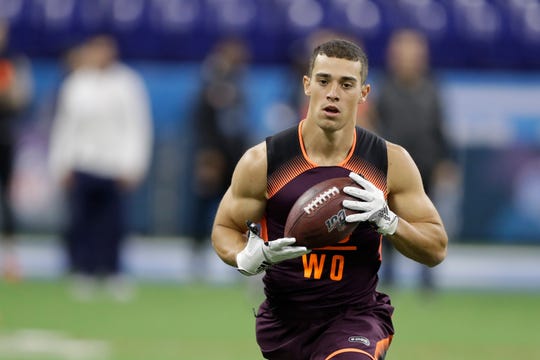 More: ‘One of the darkest moments’: How potential No. 1 NFL pick Nick Bosa got past injury aftermath

“I watched the Jackie Robinson movie,” Isabella told USA TODAY, seemingly acknowledging a certain social sensitivity. “It doesn’t feel like that, but almost like an outlier.”

Outlier. That’s a good way to put it for Isabella, the 5-9, 188-pound dynamo who was partially trained for the combine by Hall of Fame receiver Randy Moss.

Still, I’m hoping that as the NFL commemorates its 100th season, it pays homage to people like Bill Willis and Kenny Washington, two of the African-American men who in 1946 broke pro football’s color barrier. And it would be fitting to note how stereotypes shut out blacks from playing quarterback for many years, while middle linebacker and center were other spots reserved for years for whites, after integration.

While I’m still miffed that Colin Kaepernick doesn’t have a job, sacrificed for his social statement, and it’s puzzling to see the trend in head coach hiring appear to have taken a backward step, it’s also worth noting that the top two quarterbacks in the draft – Kyler Murray and Dwayne Haskins – are African-Americans with different styles.

What does that have to do with Isabella? It’s the cross-section of sports and society. I’m wondering if he has felt like Jordy Nelson once acknowledged, that people – especially opponents – tend to underestimate his speed because he’s white.

“People probably look at me differently, I think, for sure,” Isabella said. “But I think I’ve overcome it. It’s how hard you work.”

Then again, production and electronic times are part of the beauty of sports, which in its purest sense can be the great equalizer – provided people (Kaepernick included) get a fair opportunity to compete.

“Once you get going, the guys respect you a little more and they realize what you can do,” Isabella said. “I was the only white person in the receiver room. I just fit in there, earned their respect and stuff.”

Until recently, I had never heard of Isabella until I saw a segment by former Colts star receiver Reggie Wayne on NFL Network. Wayne broke down some film on Isabella, then flat-out predicted he would run the fastest time at the combine. “Someone sent it to me,” Isabella said of the clip. “Lots of pressure.”

So, Wayne has some Nostradamus with his vibe. Isabella proved him so right.

It figured he’d show up, given his track background. The combine’s 40 was undoubtedly Isabella’s biggest sprint since he won the Ohio 100-meter title in 10.51,  beating Denzel Ward – the first-round Cleveland Browns cornerback who, ironically, ran the fastest 40 at last year’s combine, a 4.32.

Isabella heard a lot about that high school showdown against Ward as his combine workout loomed. He remembers that in the preliminaries, run on a Wednesday, Ward had a better time while running in a different heat. It was the first time, Isabella said, anyone had posted a better time in a meet in which he’d participated.

“A teacher made a smart(-aleck) comment to me,” he recalled. “I was madder than heck.”

The final, pitting him against Ward and others, went down on Friday.

“I didn’t talk to anyone, didn’t sleep,” he remembers. “I didn’t care who lined up on that track, I was winning the race. And it was a great feeling afterward, to know that I accomplished that. That was the fastest I’ve ever run.”

For a while, it seemed that Isabella was destined to pursue a track career. He had just two scholarship offers for football – from Air Force and Lafayette – before landing in Amherst.

“My track coach was, ‘Maybe you should just focus on track,’ “ he said. “But I stuck with football.”

And look at him now. The speed that was boosted on the track will help him quickly get in and out of cuts as a slot receiver in the NFL. And unless he winds up as a Browns teammate, he’ll likely see Ward again somewhere down the road, but on a football field.

Wherever he lands, he’ll hear the comparisons with Wes Welker. You can believe Moss, who played with Welker with the Patriots, ribbed Isabella about the similarity.

“Probably the second day we were there,” he said of the grueling training sessions with Moss at the APSI facility. “It was, ‘Yeah, I used to work out with Wes. You’re just as small’ Randy’s like 6-5. So, he’s towering over me.”

But there was no way that Moss called him slow.

Huawei said to be preparing to sue U.S. government: source

Which contenders are performing in playoff mode and which aren’t?

DeChambeau, Koepka look to maintain momentum at the Masters

High school boys had better learn to compete with girls