Southwest Airlines has started selling tickets to Hawaii, with the first flights taking off March 17.

Introductory fares start at $49 one way for travel into mid-June, according to Southwest’s website. The cheapest fares are available on Tuesdays and Wednesdays and are likely to sell out quickly. Fares for peak summer travel range from $189-$214 each way. The airline didn’t formally announced the start of ticket sales but quietly launched a Hawaii ticket portal.

Southwest has a low-fare calendar to help find the cheapest fare.

The starting dates for other Hawaii routes, according to Southwest’s website are:

The long-awaited details come after the airline received Federal Aviation Administration approval for long over-water flights last week. The last major hurdle — six test flights to and from Hawaii — was cleared on Feb. 19.

Start the day smarter: Get USA TODAY’s Daily Briefing in your inbox

Southwest, the nation’s largest domestic carrier, is a late entrant to Hawaii. A slew of competitors already fly nonstop flights between the mainland and Hawaii, with a heavy concentration in California, Southwest’s initial target.

Travelers have been hoping Southwest’s market entrance brings fares down, especially during popular vacation periods like spring break, summer and Christmas break. Fares between California and Hawaii often drop below $300 round trip during fare sales for low-season travel, but peak summer fares on nonstop flights to Hawaii are routinely $650-$800+ out of the airports Southwest is initially targeting. (Southwest is not initially offering flights to Hawaii from Los Angeles or San Francisco, where there is more competition.) 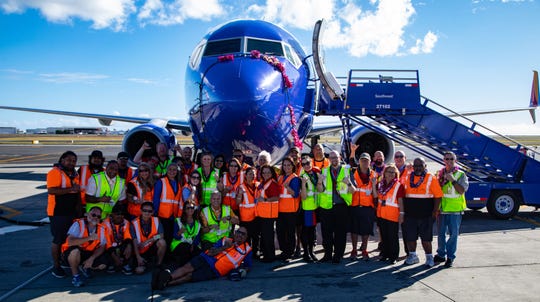 A Southwest Airlines Boeing 737-800 is seen in Honolulu with celebrating employees after the carrier’s first-ever touchdown in the Hawaiian Islands on Feb. 5, 2019. The flight was part of a certification effort needed to begin passenger service. (Photo: Southwest Airlines)

Speculation about Southwest’s introductory fares has been rampant on aviation message boards. On Airliners.net, some projected one-way fares starting at $99 for flights in the next few weeks since Southwest has limited time to fill those planes. One poster hoped for a $50 one-way fare to mark Southwest’s debut in the 50th state. (There was, alas, also speculation the airline was going to announce Hawaii flights on Feb. 14 because it bills itself as the “love” airline and LUV is its ticker symbol on Wall Street.)

Southwest has talked about flights to Hawaii — a top destination for travelers hoarding frequent-flier points on any airline — for years and formally announced plans to begin Hawaii service in October 2017. It has dribbled out details since. Last year, the airline said it planned to serve four islands in Hawaii: Oahu, home to Honolulu; Maui, Kauai and the Big Island of Hawaii, home to Kona.

Hawaii service was delayed because of government shutdown

Southwest initially dangled the prospect of flights beginning in late 2018.

Southwest executives said the airline was nearing the final phase of its efforts to get so-called ETOPS (extended range twin engine operational performance standards) certification from the FAA, with flights due to start Feb. 1, when the federal government shut down a few days before Christmas.

He said Southwest had a shot at beginning flights by the end of March if the shutdown ended within a week but otherwise it wouldn’t be able to start flights until April at the earliest. The shutdown ended Jan. 25, a Friday.

Southwest and the FAA resumed their ETOPS activities the next week, and Southwest’s first Hawaii proving flight, from Oakland to Honolulu, was on Feb.  5. Exercises with the FAA took place in Dallas the week of Feb. 11, and daily test flights began later that week. Those flights included a diversion to Hilo, on the Big Island, on a Saturday flight from Oakland to Honolulu, according to flight tracker FlightAware.

The airline’s last test flight was a flight from Maui to Dallas on Tuesday, Feb. 19. Southwest has no plans to fly from its Dallas home base to Hawaii but had flown from Oakland to Maui a day earlier.

Westvleteren 12 beer, made by Belgian monks, is now available online

Newest national park may be most diverse