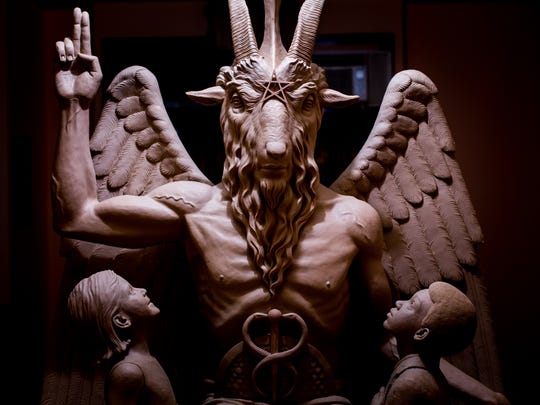 The $100,000 Baphomet statue depicts Satan as a winged, goat-headed figure. (Photo: The Satanic Temple via AP)

Like most city councils, the one in Boston begins weekly meetings with an invocation before getting down to business.

Recent individuals brought in to lead the ritual, typically a spoken prayer, have included a Catholic sister, a Methodist preacher and a Presbyterian minister.

Now The Satanic Temple, an international Satanist group headquartered in nearby Salem, wants its turn.

But after having requests to lead an upcoming invocation denied, the group of Satanists is now accusing the Boston City Council of religious discrimination in a complaint filed in October with the Massachusetts Commission Against Discrimination. The commission agreed to launch an investigation into the matter in December.

“We’re very communally active,” said Malcolm Jarry, co-founder of the The Satanic Temple. “This is something that should be open to all faiths to participate. We just want to be respected and treated like members of the community that we are.”

Followers of The Satanic Temple, which has chapters in 17 cities, are atheist and do not subscribe to supernatural beliefs. The group’s principles include encouraging benevolence and empathy among all people, rejecting tyrannical authority and advocating for “practical common sense and justice.”

Jarry said The Satanic Temple in October emailed Boston City Council President Andrea Campbell asking that a member of the organization be able to speak during the invocation. But the council’s attorney, according to the complaint, responded by telling the group that the body does not accept requests to deliver invocations, has no formal policy regarding invocations and simply allows individual council members to choose who leads them.

“The very definition of discrimination is preferential treatment of different groups or individuals,” Jarry said. “Because they are the ones who are solely making the decisions, it can’t help but be discriminatory.”

In the complaint, first reported by the Boston Herald last month, The Satanic Temple has accused the 13-member council of violating the establishment clause of the First Amendment among other laws.

Campbell, the council’s president, declined to comment on the complaint through a spokeswoman.

Satanists have been allowed to give council invocations in other cities including Pensacola, Florida, and the Kenai Peninsula Borough in Alaska.

In Pensacola, the Satanist-led invocation was met with vocal protests by a large group of Christians in the council gallery. But after they were escorted away, the Satanist, wearing a black hooded robe, was able to speak for several minutes and conclude the invocation without interruption.

“The bowels of hell didn’t open up, or whatever,” Jarry said.

But councils in other cities have clashed with The Satanic Temple over invocations.

In Phoenix, followers of the Satanic Temple were scheduled to give an invocation at a meeting in 2016. But rather than letting the Satanists speak, the Phoenix City Council voted 5-4 to cease holding spoken prayers altogether and shift to moments of silences, ending the body’s 65-year practice and avoiding the threat of a lawsuit.

In Boston, a timeline on the The Satanic Temple’s complaint is unclear.

H Harrison, an assistant with the Massachusetts Commission Against Discrimination, said he could not discuss the status of the complaint, citing the agency’s policy for all cases.

Argentina rape victim, 11, forced to give birth after wanting abortion