The summit between US President Donald Trump and North Korean leader Kim Jong Un came to an abrupt end in Hanoi, Vietnam on Thursday. Trump said US sanctions on North Korea were a sticking point. (Feb. 28)
AP

During a rare statement to the international media in Vietnam, Foreign Minister Ri Yong Ho said the North Koreans offered far more – and asked for far less – than the way Trump characterized the proposal. He also suggested it would be difficult to restart the negotiations.

Start your day smarter: Get USA TODAY’s Daily Briefing in your inbox 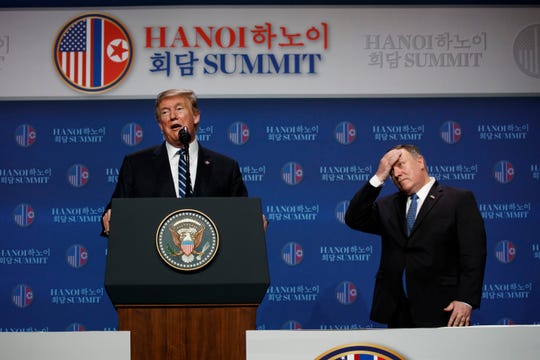 Trump had said North Korean leader Kim Jong Un asked for a full lifting of economic sanctions on his government. In exchange, Trump said, Kim offered to dismantle North Korea’s main nuclear facility, Yongbyan. But Kim would not commit to giving up North Korea’s stockpile of nuclear bombs, its missiles or its other capabilities, the president said.

Ri told reporters that North Korea had offered to permanently dismantle all its nuclear material production, including plutonium and uranium, around the Yongbyan facility under observation by U.S. experts. And Kim only asked for partial relief from the multilateral sanctions, he said.

The North Korean official’s comments came after a high-stakes summit in Hanoi ended abruptly with no agreement. The White House cancelled a signing ceremony, planned for Thursday with Trump and Kim. At his own a news conference, Trump conceded the two leaders could not reach an agreement that would lead to the denuclearization of the Korean Peninsula.

“Sometimes you have to walk,” Trump told reporters. He said Kim’s offer to dismantle Yongbyon did not go far enough.

“That facility, while very big, it wasn’t enough to do what we were doing,” Trump told reporters Thursday.

Ri did not take any questions from reporters, ignoring a shouted query about how North Korean officials could be unaware of Otto Warmbier’s detention and condition after he was imprisoned there. Warmbier was arrested in North Korea in 2016 after visiting the country with a tourist group. He suffered a severe brain injury and died days after the North Koreans released him in 2017.

Trump said he raised Warmbier’s case with Kim but the North Korean dictator denied knowing anything about it. “He tells me that he didn’t know about it, and I will take him at his word,” Trump said.

Trump’s acceptance of Kim’s answer has sparked backlash from lawmakers in both parties.

More: North Korea summit: Why Trump’s failure to reach a deal is being lauded in Washington

PG&E says it likely started the Camp Fire, expects $10.5B in charges