Surprise! Prince William and Duchess Kate made an unannounced visit to Northern Ireland Wednesday, where they greeted the public and played football. 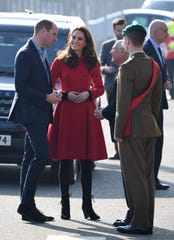 The royal couple kicked off their two-day trip Wednesday by meeting members of the public in Belfast.

Perhaps in homage to the Northern Ireland flag, Kate wore a red Carolina Herrera coat, a go-to item in her winter wardrobe. She also wore the statement-making number during her and William’s royal tour of Canada in 2016.

She paired the look with black pants and lace-up black heeled booties.

According to a Kensington Palace press release, their engagements during this visit are focused on celebrating the young people of the area.

This included a visit to Windsor Park Stadium, home of the Irish Football Association, where Kate played football with local children.

William joined the fun too, passing the ball around with his wife.

The royal couple are also scheduled for activities at the Roscor Youth Village in Fermanagh and a party at the Belfast Empire Hall. 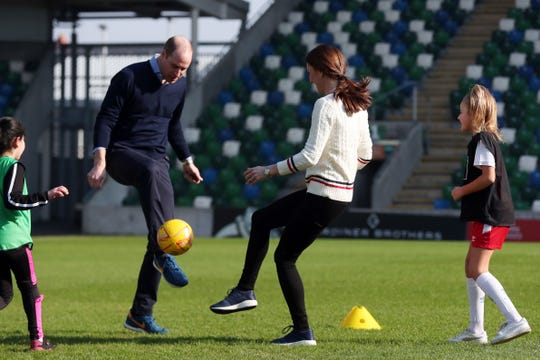 Prince William and Duchess Kate get playful at the National Stadium in Belfast on Feb. 27, 2019. (Photo: Pool, Getty Images)

William last visited Belfast in October 2017 without his wife, who was then pregnant with the couple’s third child.

CW Arrow to end after 10 episode Season 8 this fall

Chelsea Handler announces podcast series based on her new book