Nikki Sixx has no qualms about becoming a dad again at 60.

The uninhibited Motley Crue bassist revealed earlier this month that he’s expecting a baby girl with his wife Courtney Bingham, 33, who is five months pregnant.

The news came as a surprise to many fans of the ’80s rock icon, who underwent a vasectomy following his 2007 divorce from his second wife, actress Donna D’Errico, with whom he shares a teenage daughter. He also has three children with his first wife, Playboy model Brandi Brandt, all of whom are in their 20s.

“I was once married to someone named Satan, and I said, ‘I’m not going to live the rest of my life in court fighting over child support, so I don’t ever want to do this again,’ ” Sixx says of his decision to get a vasectomy.

But that changed when he met Bingham, whom he married in 2014.

“I remember thinking, ‘I miss those days, I miss being a dad, ” says Sixx, who was raised in San Jose, California, by his single mom and grandparents after his dad left. “I didn’t have a father, and I always loved being a father. It’s an itch I can’t scratch. My kids are older, and I have a great relationship with them.” 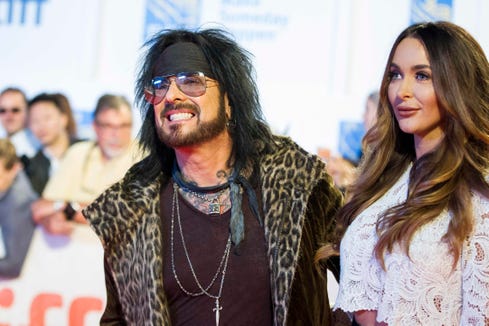 The choice then was whether he should get the vasectomy reversed “and just take shots in the dark, hoping she gets pregnant,” he continues. But at the time, he was touring with his band, Sixx:A.M., and working on the upcoming stage musical adaptation of his 2007 memoir, “The Heroin Diaries: A Year in the Life of a Shattered Rock Star.”

Sixx released new single “The Dirt” featuring Machine Gun Kelly last week, which marks Motley Crue’s first song together since disbanding in 2015. The track is taken from the group’s upcoming biopic of the same name, premiering on Netflix March 22.

‘The Rock’ gets heat, praise for saying tank named for him an ‘honor’