People rarely rave about the meals they eat at gas stations, but that is not the case in Franklin, North Carolina. Hungry diners – locals and tourists alike – happily line up in the Hot Spot gas station parking lot, waiting for a table at Caffe Rel, a European bistro offering a one-of-a-kind culinary experience. 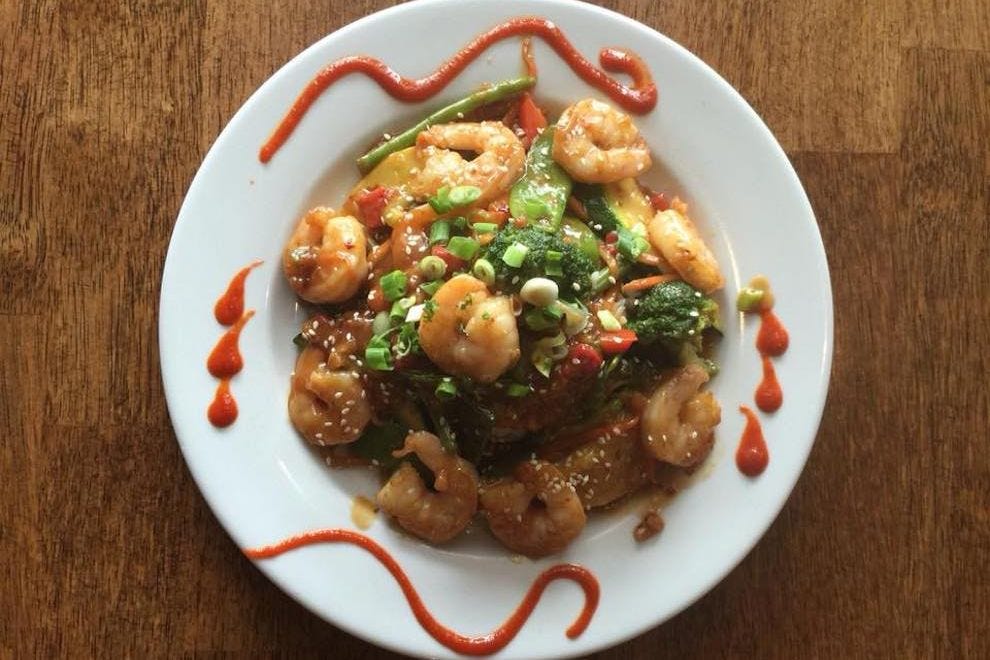 Once inside, guests are comfortably seated, surrounded by an eclectic display of art. A dessert counter filled with triple layer cakes, dessert tortes, and other sweet treats reminds diners to save room. The wait staff, dressed in freshly pressed white dress shirts, serve up a variety of dishes you’d be hard-pressed to find anywhere else in the area, let alone at these prices.

But from the outside, Caffe Rel is unassuming; just another gas station restaurant, except for the sign that reads, “It’s about the food.” If you didn’t know it was the area’s top-rated restaurant on Yelp, TripAdvisor and Facebook, you probably wouldn’t think twice about stopping in, but that’s exactly how owner and chef Richard E. Long likes it. In the fifteen years they’ve been in business, he has never done any advertising, believing his food will speak for itself. 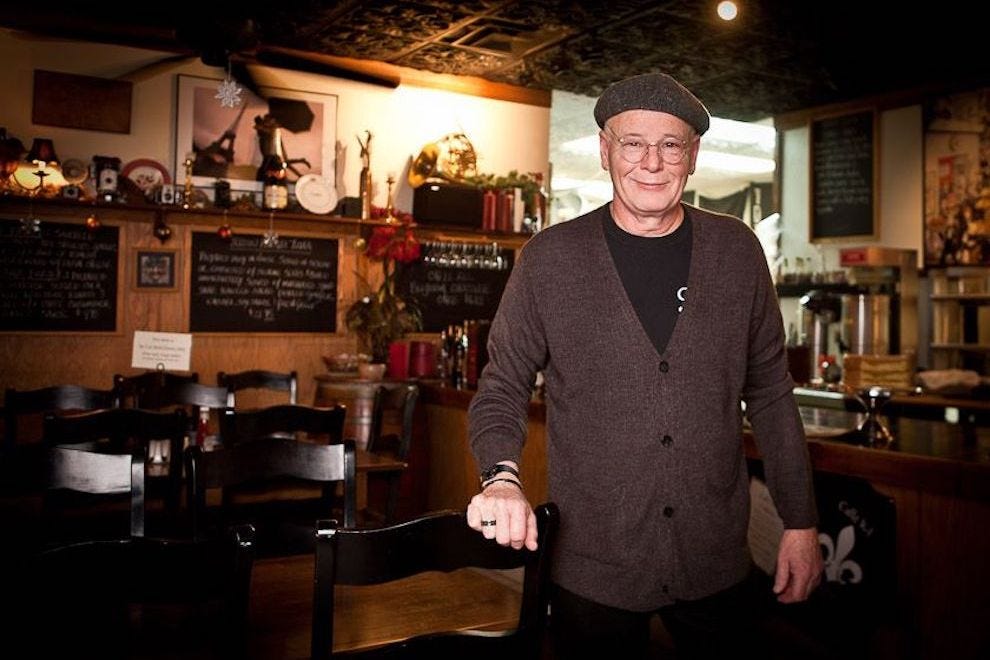 Chef Richard is the last guy you would expect to be running a restaurant out of a gas station. His extensive resume of close to 50 years is mostly filled with time spent managing kitchens in five star hotels, restaurants and private clubs. He got his start working under chef Otto Indemauer III at the Hershey Resort in Pennsylvania, and after seven years, went on to complete his training at the Greenbrier Resort’s exclusive culinary training program.

He took classes at Le Cordon Bleu and had the opportunity, as part of the Greenbrier team, to cook for political heads, like Secretary of State Alexander Haig, and even the Iranian hostages after their return home in 1981.

And it is for each one of these highly esteemed reasons that he intentionally chose to end up in Franklin, a small rural mountain town of about 4,000 residents, running a restaurant out of a gas station.

In 2003, after more than 30 years in the industry, chef Richard chose to leave his six-figure salary and highly respected position to open his own restaurant. He selected the local Hot Spot’s vacant restaurant space simply because it was the exact opposite of what he was leaving behind.

“I wanted to drop the pretension and cook for real people who appreciate good food at a fair price. I was tired of all the nonsense and tired of the average guy not being able to take his family out for a meal without going bankrupt.” To chef Richard, the food is more important than anything. He explains, “It’s about the food, like the sign says. I want to serve food to people who have never eaten my type of dishes.” 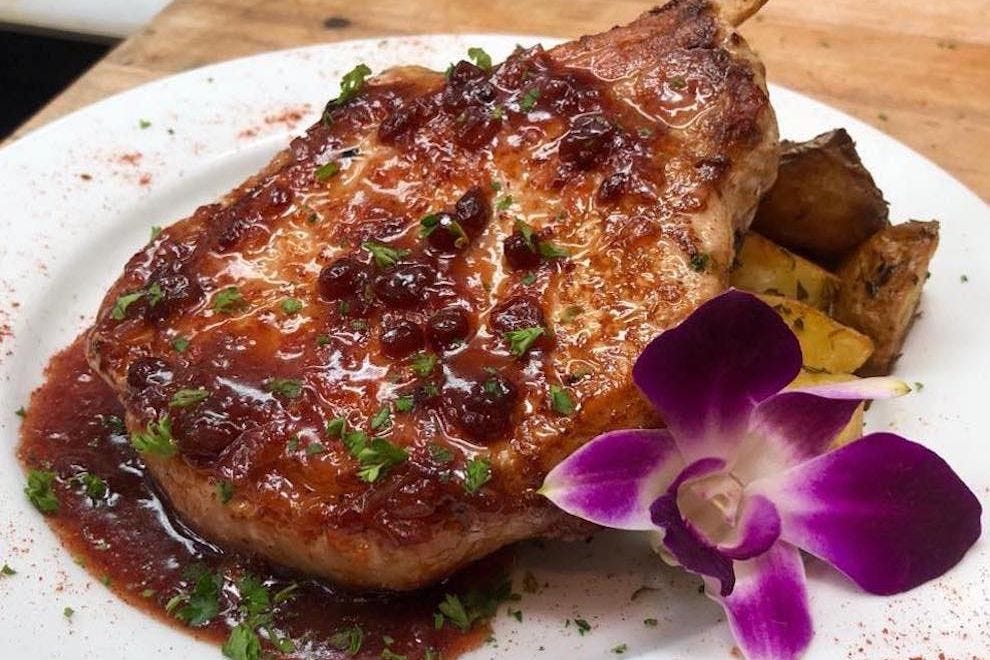 The menu, inspired by his professional culinary training and world travels, includes house specialties like crawfish cognac and cream over linguini: “Louisiana crawfish tails, sauteed in butter, shallots, garlic, a touch of lobster fumet and fresh cream, [and] finished with a fine French cognac.”

Sprinkled throughout the restaurant are tributes to the days he spent as a child in the kitchen with his creative Belgian grandmother, Marie. A stained glass window above the exit reads “Marie,” and throughout the winter holidays, fresh gaufrettes – traditional French cookies – are handmade and given out to customers.

But her influence is most present in Caffe Rel’s most popular dessert, the triple layer chocolate birthday cake – the same chocolate cake Gran would bake for him each year on his birthday and that he gives to guests on their birthdays. “If you find someone who touches your heart with food, get the recipe,” he advises me. 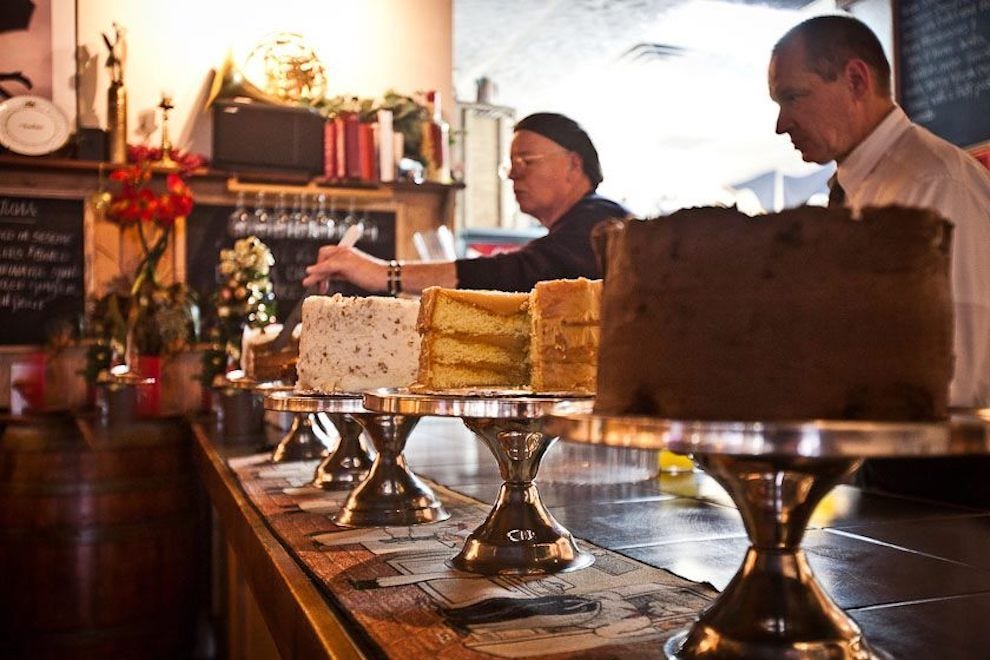 But the standard for excellence at Caffe Rel does not stop with the food. Chef Richard believes a high quality experience extends to service as well. He has high expectations of his staff and is known to hold them accountable: “My people all come in crisp white shirts and ties with black slacks or they don’t come to work at all.”

But he’s also trusted and respected. This, he believes, is why so many members of his team have stuck with him since the beginning. “You have to expect the best from everyone in your restaurant. I have wait staff that have been here for 15 years which is almost unheard of. I introduced my sous chef, Daniel Albert, to this business in 1994. The people who are here believe in what I am doing and try to make everything excalibur every night.”

The trust, it seems, comes from giving as much to the team as he asks of them. He demands 100% when they’re working but understands just how grueling the food industry can be. “When I was young, if my wife wanted to see me on New Year’s Eve, she had to come to the hotel. If I had a minute to stop and give her a kiss, I did and if I didn’t, I didn’t. For years, I didn’t have control, but now I do.”

Chef Richard wants his employees to be able to tell a different family story because he believes “there are more important things than making a dollar.” This is why Caffe Rel is only open Tuesday through Saturday and never on family holidays – except for this past Thanksgiving when he and his staff chose to spend the day serving dinner to homeless veterans in his community.

“I’m proud to say I’ve spent 49 years of my life in kitchens from five stars to no stars because I love food and I love people and I love to pass that along.”

How will the weather affect your leaf-peeping this year?

5 things every first-timer should do