They might not have been the hosts of the 2019 Oscars, but Tina Fey, Maya Rudolph and Amy Poehler kicked off the night with a shoutout to USA TODAY!
Courtesy A.M.P.A.S.© 2019

The “BlacKkKlansman” writer-director was sipping champagne backstage at the Academy Awards, where he won an Oscar for best adapted screenplay. But he had some choice words for “Green Book” which beat his film out for best picture.

“I thought I was court-side at the Garden,” he said. “The ref made a bad call.”

Lee has some history here. His 1989 film “Do The Right Thing” was not nominated for best picture the year “Driving Miss Daisy” won the best picture Oscar. The dramedy dealt with a wealthy white woman (Jessica Tandy) learning from her black chauffeur (Morgan Freeman). 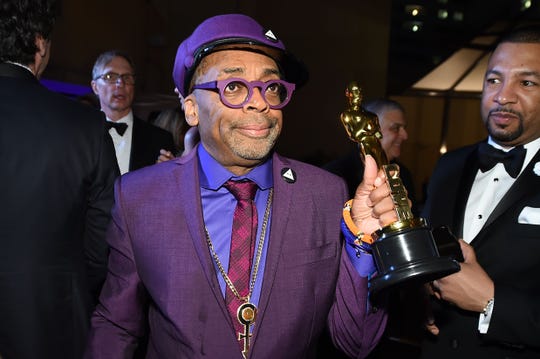 “I’m snake-bit. Every time someone’s driving somebody I lose. They changed the seating arrangement,” said Lee. “But in ‘89, I didn’t get nominated (for best picture). But this one we did.”

The animated Lee gave respect to the diversityin the Oscar show, which saw his first non-honorary Oscar win. He paid respect to April Reign, who started the #OscarsSoWhite hashtag that went viral after 2017’s nominations, and former academy president Cheryl Boone Isaacs, who was key to expanding the Academy membership to make it more diverse.

‘The Handmaid’s Tale’ Season 3 due in June, will miss Emmys

Chelsea Handler announces podcast series based on her new book