RIVERSIDE, Calif. – The Southern California couple accused of torturing and abusing their children for years in their home east of Los Angeles pleaded guilty to one torture, six abuse to a dependent adult, three child endangerment and four false imprisonment charges in court Friday. The couple

David Turpin, 48, and Louise Turpin, 51, who were arrested in January 2018, initially faced dozens of counts related to the accusations of abuse to some of their 13 children, but the charges were reduced Friday from 49 to 14. The children ranged in age from 2 to 29 when authorities found them. Sentencing will be April 19.

In a news conference Friday, Riverside County District Attorney Mike Hestrin said, “Those pleas will result in life sentences. They’re going to serve an indeterminate sentence of 25 years to life … unless the parole board, at some point, affirmatively decides they should be released, they will serve the rest of their lives in prison.” 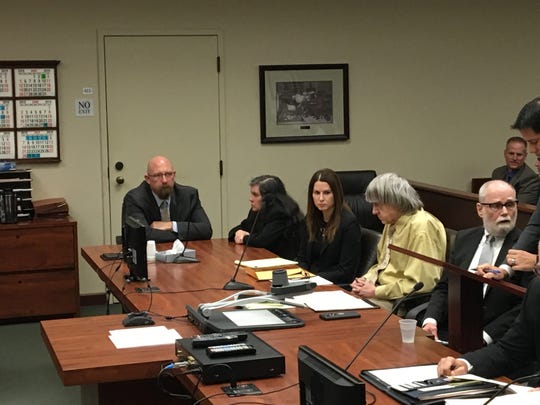 David and Louise Turpin appear in court in Riverside, California, on Friday, Feb. 22, 2019. The couple pleaded guilty to torturing and abusing their children. (Photo11: Shane Newell / The Desert Sun)

“When I spoke to you when the case was filed last year, I commented that this office was fully prepared to seek justice in this case … but that we were going to seek justice in a way that did not bring further harm to these victims. This is among the worst most aggravated child abuse cases I have ever seen or been involved in my career as a prosecutor. Part of what went into the decision-making process was that the victims in this case would not ultimately have to testify,” he said.

Hestrin repeatedly refused to comment on the state of mind of either the parents or the children. He said he didn’t want to pre-empt the children from speaking at the sentencing hearing, which they “may or may not” decide to do.

However, he did say that the children “are uniformly pleased that they would not have to testify.

The case came to light when the couple’s 17-year-old daughter called police after escaping through the window of a tract home in Perris, a small community about 70 miles east of Los Angeles.

On the 911 call, the girl said she and her siblings had been chained to their beds. She added that she never finished first grade and wasn’t permitted to take baths.

“Sometimes I wake up and I can’t breathe because of how dirty the house is,” she told authorities.

At a preliminary hearing in June, authorities said the children were an average of 32 pounds underweight. They often starved and were deprived of water, but when they were fed, their diets mostly consisted of frozen burritos, baloney sandwiches and peanut butter and jelly sandwiches.

Investigators testified that the children lacked education and said a 22-year-old son had told them he only completed the third grade.

Photos show some of the Turpin children wearing feces-stained clothing, which investigators described as putrid.

The abuse against the couple’s children, as cited in criminal charges, stretched back more than a decade to when the Turpins lived in Texas. In interviews with investigators, the Turpin children said that if they were disobedient they were frequently subjected to punishment included beatings with a paddle, an oar and a metal-tipped tent pole. They were padlocked inside feces-stained cages or dog kennels for days, weeks or even months.

January 2018: Shackled kids were going to move to Oklahoma ‘within days’ of parents’ arrest

January 2018: Parents accused of torturing 13 children ordered not to speak to them for 3 years

In photos, the children appear bruised on their wrists and torsos from shackles and other forms of punishment. One of the children told an investigator her neck was left bruised for days after her mother choked her while asking if she wanted to die. When the girl responded that she didn’t, her mother is said to have responded,”Yes, you do. You wanna die and go to hell.”

In addition to abuse charges, David Turpin also faces eight perjury charges stemming from documents authorities claim were falsified to state his kids were being home-schooled.

The family home, which sits in the middle of a residential street in Perris, has remained vacant since the couple were arrested. In February 2018, the family’s cars disappeared.

About nine months later, a foreclosure took place; the home hit the auction block in December 2018. After the initial auction closed with a bid of more than $310,000, the home was on the online auction for a second time in January before the listing was removed.

It’s unclear whether the home has a new owner.

January 2018: The worst abuses a California couple are accused of committing on their own children

When is Memorial Day? What is open and closed?