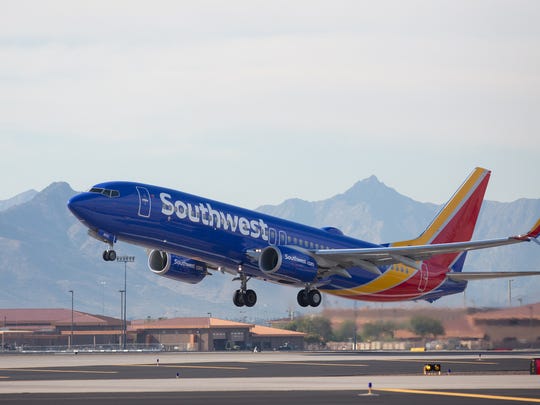 Southwest Airlines, alarmed by a spike in flight cancellations and delays in the past several days due to reported maintenance issues, has taken the unusual step of publicly apologizing to customers and blaming the mess on its mechanics’ union.

In a statement late Tuesday, Southwest Chief Operating Officer Mike Van de Ven said the Aircraft Mechanics Fraternal Association, which has been in contract talks with Southwest since 2012, has a history of work disruptions and that Southwest will be investigating the “current disruption and exploring all possible remedies.” He noted that Southwest also has two outstanding lawsuits against the AMFA.

“We apologize to our customers who have been inconvenienced by this disruption,” Van de Ven said.

The union was quick with a response.

“Southwest Airlines scapegoating of its expert aircraft maintenance technicians does not bode well for the airline’s safe operations,” Bret Oestreich, national director of AMFA, said in a statement. “Safety is, and always will be, our number one priority.”

It is the latest escalation in the long-running labor dispute. Last week, in a letter to mechanics in Southwest maintenance hubs in Phoenix, Las Vegas, Houston and Orlando, Southwest declared an operations “emergency” and ordered all hands on deck to get the planes back in service. The airline said the number of aircraft unexpectedly out of service more than doubled from the usual 20 per day.

Southwest has 750 planes in its fleet but the spike in grounded aircraft still stings. On Sunday alone, Southwest canceled 112 fights, or 3 percent of its scheduled flights, and delayed 827 flights, about one in five, according to flight tracker FlightAware.

On Tuesday, the airline canceled 191 flights, or 4 percent of its scheduled flights, and delayed 858 flights, according to FlightAware. A spokesman said half of those flight cancellations were due to the maintenance issues. The airline had the highest rate of cancellations and delays in the country Tuesday.

Southwest added its home base, Dallas Love Field, to the maintenance operations emergency on Tuesday.

Southwest has canceled 410 Wednesday flights, 10 percent of its schedule, according to FlightAware, but the airline has not disclosed how many are due to maintenance and how many are cancellations ahead of snow and other winter weather.

“We are committed to operating a safe fleet, and every report is investigated, which is why we issued a notice to require an “all hands” response to get out-of-service aircraft back into the fleet serving our customers,” he said in the statement.

Van de Ven said Southwest plans to use its third-party maintenance providers to help with ongoing aircraft maintenance so that Southwest’s mechanics can “work the increased workload of maintenance tasks they have identified.”

Oestreich has said Southwest has manufactured the emergency and is trying to intimidate mechanics. The airline’s note about the operations emergency says mechanics who call in sick will be required to submit a doctor’s note. He said he has not heard of an airline issuing an “operational state of emergency” in 28 years in the business.

“For Southwest’s leadership to connect the airline’s self-declared “operational emergency” to collective bargaining negotiations is simply an attempt to divert attention away from the airline’s safety issues,” he said in Tuesday’s statement.

Oestreich said he doesn’t understand why Southwest declared an emergency in this case but didn’t do so last year in the wake of Southwest Airlines Flight 1380, where the aftermath of an engine failure caused a passenger’s death on a flight from New York to Dallas. The airline’s mechanics worked nonstop to inspect 9,000 engine fan blades in 30 days, he said.

Blown away by innovation or price? Samsung's foldable phone opens up debate

Most popular national park sites in each state

Promo code includes new group discount for up 35% off