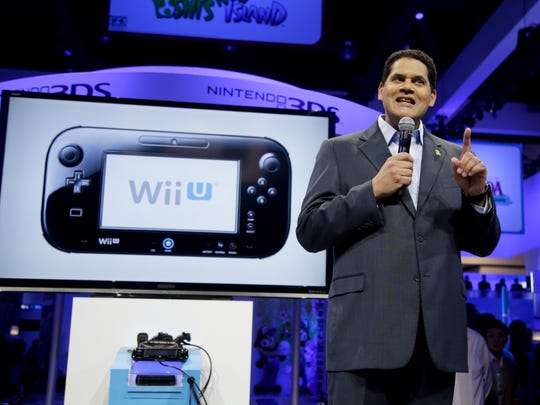 Reggie Fils-Aime, president and chief operating officer of Nintendo of America, addresses the media at the Nintendo Wii U software showcase during the Electronic Entertainment Expo in 2013. (Photo11: Jae C. Hong, AP)

Reggie Fils-Aime, president and chief operating officer of Nintendo of America and one of the video game company’s most outspoken executives, will retire this year.

In a statement released Thursday by Nintendo, Fils-Aime will leave the company on April 15. Doug Bowser, senior vice president of sales and marketing at Nintendo’s American division, will take over as president.

“Nintendo owns a part of my heart forever,” Fils-Aime said in a statement. “It’s a part that is filled with gratitude – for the incredibly talented people I’ve worked with, for the opportunity to represent such a wonderful brand, and most of all, to feel like a member of the world’s most positive and enduring gamer community.”

Fils-Aime worked at Nintendo for 15 years, including the last 13 as Nintendo of America’s president and COO. During his tenure, Fils-Aime served as a key pitchman for Nintendo, appearing during events such as the Electronic Entertainment Expo and Nintendo Directs, a series of live-streamed announcements of future hardware and games.

Nintendo fans, Reggie has a message for all of you. Please take a look. pic.twitter.com/EAhaEl5oEJ

Bowser in charge?: Yes, Nintendo is replacing one of its execs with someone named Bowser

“Reggie is known as an exceptional leader,” said Nintendo President Shuntaro Furukawa in a statement. “We are grateful that he is leaving the business in good shape with strong momentum.”

Fils-Aime served at Nintendo under one of the company’s most pivotal runs. In 2004, the company launched its DS handheld, one of the most successful portable devices ever. In 2006, Nintendo launched the Wii home console, selling more than 100 million units over its lifetime and becoming a cultural phenomenon with its use of motion-controlled gameplay.

“Our focus is strictly on driving more and more consumers into the gaming industry,” Fils-Aime told USA TODAY in 2009 during the height of the Wii’s popularity. “If the consumer sees value and innovation, they are willing to spend.”

5 incredible discounts you can get Tuesday

Elon Musk, SEC told by judge to try to settle their dispute